The War on Weed 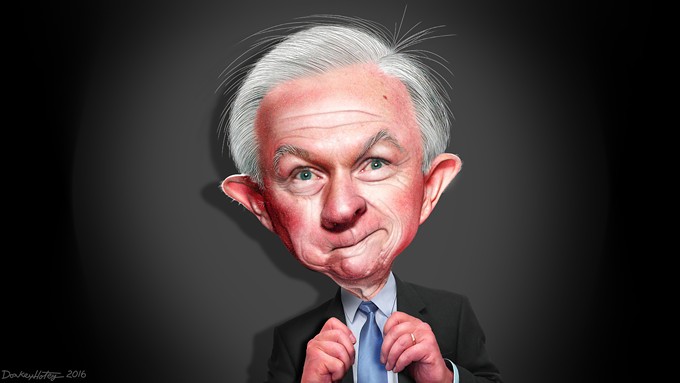 Sessions' Department of Justice announcement rescinded the former guideline for U.S. attorneys to take a hands-off approach to state-legalized marijuana.

In conjunction with the removal of the Rohrabacher-Farr amendment in this year's federal budget bill, federal law enforcement has the support of the DOJ to go after marijuana business in recreational states now and medical states next month.

While the decision has struck the billion-dollar national industry with some uncertainty, Thursday's memo didn't instruct U.S. attorneys to start drawing up lawsuits against state-legal businesses. Instead, he encouraged their own discretion in carrying out the DOJ's objectives.

Taken at face value, the language of the memo doesn't actually change much. Americans can reasonably expect U.S. attorneys to prosecute violent crime and criminal activity even with the existence of legal marijuana businesses.

In fact, that was the exact response from several recreational marijuana states to letters sent by Sessions earlier this year outlining what he thought were several discrepancies with the marijuana industry in those states.

Government leadership from those states told Sessions that his conclusions were based on a fundamental misunderstanding of the issues and that they were taking a responsible approach to enforcement of illegal conduct such as trafficking and sales to minors.

So far, several of 93 U.S. attorneys have responded to Sessions' directive, notably those for the districts of Oregon, Colorado and Western Washington—all of who relayed the general message of, "Yeah, we're already doing that."

Of 13 U.S. attorneys overseeing districts in which recreational marijuana is legal, nine were appointed by Donald Trump, four of which were appointed in the days leading up to Sessions' announcement.

If Trump's appointments take Sessions' directive enthusiastically, some of those states could see mounting consequences in their marijuana markets.

Several of Trump's appointments are less-sympathetic to legal marijuana than their constituents, raising concerns about the future of marijuana in states like Alaska, Nevada and Maine.

However arduous the U.S. attorneys feel about cracking down on marijuana, growing public support (64 percent according to the latest Gallup poll) can still cause some resistance.

Like most court cases, the jury still decides the verdict in any federal prosecutions of marijuana businesses, which may prevent charges brought against those businesses. A jury full of people who voted for marijuana in their state would be hesitant to convict conduct they decided should be legal.

Though trial by jury provides a glimmer of hope should things take a turn for the worst, federal law enforcement has an ace up their sleeve in combating legal marijuana operations: civil asset forfeiture.

Under civil asset forfeiture laws, authorities needn't prove any legal violations, and any seizure of assets is legal under mere suspicion unless a judge orders their return, which rarely happens and never to the full amount seized. And to even challenge the seizure, means hurdling the cost of lawyering up.

That means that law enforcement can take cash, land, products and buildings associated with the production and distribution of marijuana with nothing more than a "reasonable suspicions" of illegal conduct.

Without ever stepping foot in a courtroom, people in the marijuana industry stand to lose their investments and livelihoods should law enforcement catch a whiff of anything they deem illegal.

Again, this largely depends on the individual U.S. attorneys but still gives them an open avenue to greatly impact the industry without ever filing a criminal case.

The good news is that Arizona's medical marijuana program is generally safe for the time being thanks to a clause in the 2010 Arizona Medical Marijuana Act, which gives patients an alternative to state-sanctioned licensing.

Should the state Department of Health Service decide to stop issuing licenses, a notarized document of qualifying conditions and a doctors' certification will still allow patients the legal right to consume and possess marijuana.

Additionally, the law provides that should a dispensary not exist within a 25-mile radius of a patient, that patient can legally grow up to 12 plants. Ray Stern of the Phoenix New Times predicts this would result in a black-market explosion for marijuana, where patients would continue to seek medication in lieu of supply.

Arizona's U.S. attorney, Elizabeth Strange, currently holds an acting position, meaning Trump must nominate a permanent appointment soon. Strange has been largely silent on Sessions' announcement, simply telling the New Times she "does not have anything to add to the Attorney General's announcement at this time."

A lot depends on Trump's appointments to determine the course marijuana will take in America, but an ingrained public opinion and political allies provide a substantial foundation to keep the blunt burning for now.