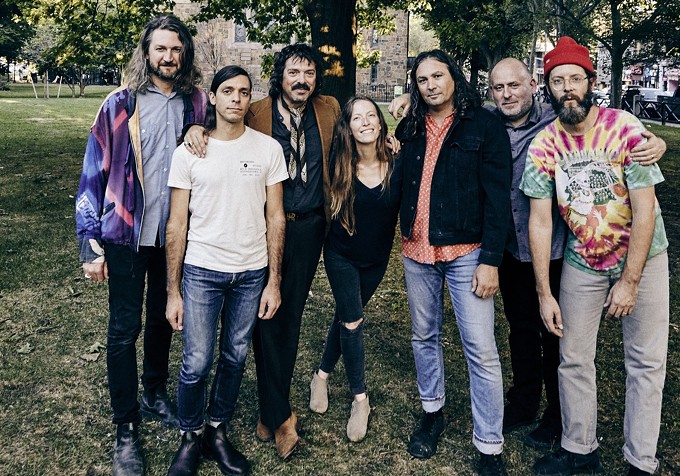 (Jimmy Fontaine/Contributor)
The War on Drugs’ latest album, “I Don’t Live Here Anymore,” was created during the COVID-19 pandemic.

The War on Drugs drummer Charlie Hall said it feels good to be back on stage promoting the band’s new album, “I Don’t Live Here Anymore.”

The War on Drugs will play The Rialto Theatre in Tucson on Thursday, Oct. 13, during the tail end of its tour that started in January.

The tour has had many notable stops and many new stories for Hall to tell. A highlight was playing The Olympia in Paris.

“It was just packed, and we were sounding good,” Hall said. “We’re flowing. That’s the goal with all this. You want to find that state of flow. We weren’t overthinking things. It has happened before, and it’s happened since but I just remember the Olympia and Paris being one of those gigs where it’s just next level.”

“It was in the middle of a Biblical blizzard,” Hall said. “Everyone who was there wanted to be there. They had to work to be there because freaking trains were shut down. Everyone that was there was like, ‘We’re in this thing.’ It felt so warm. I was talking about how freezing it was on the bus, but that gig felt so warm.”

They also stopped by in Arizona previously to play at the Innings Festival in Tempe in late February. It was a stop Hall said the band desperately needed so they could ditch masks and frigid temperatures.

“We finished this grinder of a tour and all of a sudden, we’re all together outside and I can see people’s faces, like our crew,” Hall said. “I haven’t seen some of these people’s faces in months. We weren’t doing a lot of like eating together and all that stuff. We’re just trying to be as safe as possible.

“I Don’t Live Here Anymore” is the band’s fifth studio album since its inception in 2005. This album serves as a metaphor for growing up.

“I think focus is a good word for it because I think there’s a lot of attention to making sure that there’s a lot of intentionality,” Hall said. “We’re not really a jam band. You might say we’re like jam adjacent.

This focus has even leaked into their touring style. The songs seamlessly flow from one to another.

“We’ve been making an effort to switch it up because that’s what people want, but we settled in some really sweet blocks,” Hall said.

“Like, ‘Oh, these four songs really work together. They flow into each other really well.’ So we have been keeping these blocks of songs together, and then there’s a spot here where we’ll throw in some audibles or whatever. That intentionality with the record and that focus, I think we’ve been doing that with the live show to kind of extrapolating.”

The album was created during the COVID-19 quarantine. The isolation leaks into it as does all the familial bonds the band got to focus on with their newfound time off.

“Everybody handled it differently,” Hall said. “It was tough. We are a band that likes to work and play shows. So, I think everybody dug in a little bit. and obviously, there were some positive outcomes creatively. And everyone was working on both this record and also their own projects. Another positive of the whole thing was just getting to be together (with your family). But, it’s really nice to be to be out and finally able to do our thing.”

The War on Drugs