Finally, your opportunity to arbitrarily assign value to famous people who have some connection to Tucson

Back in the day, Tucson was home to plenty of celebrities. When Hollywood was still making movies out at Old Tucson, you could the likes of John Wayne in the local watering holes. Farrah Fawcett used to own a house in the Foothills. Mobster Joe Bonanno found sleepy Tucson an excellent place to escape the heat.

But as time has marched on, our celebrity quotient has been in serious decline. Sir Paul McCartney hasn't been seen in these parts since Linda passed away. Hollywood star Lee Marvin passed away back in '87. Diana Ross has made herself scarce ever since that unpleasant business with the police. Neko Case left for New England a few years back with a blaze of anti-Tucson sentiment in the New York Times.

In short: We're suffering something of a celebrity deficit—a point that was driven home a few months back, when we noted that La Salsa has turned to auto dealer Jim Click to endorse its salsa. We know that Click is a household name, but he's not exactly the guy we'd turn to when seeking advice about Mexican food, y'know?

It got us thinking: Who are Tucson's biggest celebrities these days? The kind of people you'd get all excited about and start whispering to your girlfriend if they walked into the bar?

We've put together a NCAA-style bracket of 32 well-known Tucsonans to try to get an answer to the question.

Here's where you come in. For the next few weeks, you readers will be deciding which of our celebrities move on to the next round by voting at tucsonweekly.com. Voting will be open from Wednesday night at 5 p.m. to Sunday night at 5 p.m.

You can only vote once, so don't try to stuff the ballot box, no matter how much you might be obsessed with one of our local celebs. Chuck George will have to stand on his own merits, without the assistance of your strangely obsessive clicking.

You readers will decide who reaches the final four. Then the TW staff will take over and pick the winner. After all, democracy has its limits, right?

When she moved back to Tucson last year, Gabby Giffords could have retreated into seclusion, a la Princess Grace. Instead, she's embraced a new public role in campaigning against gun violence. Gabby's fight back against long odds puts her in international spotlight, but her love for Tucson shines brightly from her heart. In round one, she faces longtime local TV reporter Bud Foster, who has forgotten more about Pima County's institutions than most of the younger folks he's working with will ever learn. Plus, his head was once the subject of a morning radio show's novelty song, which has to count for something.

Howe Gelb has been tearing rock 'n' roll apart and rebuilding it in his own inimitable way for decades with an ever-growing collection of collaborators and co-conspirators for decades. Sure, he's bigger in Europe than or own fair city at times, but he still creates his music surrounded by the adobe walls of his downtown home. He's facing famed restaurateur Mr. An, who will surely win the votes of his many No. 1 sons. Sure, Howe has an incredible discography, but how are his sushi rolls?

Back in the good times when this town was fueled by stucco-dollars, nobody knew how to move dirt like legendary land speculator Don Diamond. Whether he was working the local pols for a rezoning or putting in the fix with the feds for a land swap, Diamond knew how to make a deal. But let's give credit where credit's due: He's often put that wealth to good use helping, including UMC's Diamond Children's Hospital. But can his diamond touch outdo Lute Olson, who was the undeniable king of UA coaches for two decades? Olson receives a technical foul in the competition for that less-than-graceful exit a few years back.

Local author Chuck Bowden's noir-ish chronicles of border violence, white-collar fraudulence and crimes against nature make him one of the few local authors who might be known outside the Antigone Books reading club. He's up against Arte Moreno, who was born in Tucson, went to the UA, made a ton of money in the billboard industry and now owns whatever we're calling the Angels these days. If you're voting based on wealth, Moreno has this one in the bag.

KOLD weatherman Chuck George is surely our most beloved forecaster since Jimmy Stewart left the biz. We love watching Chuck whether he's warning us about a triple-digit day or suffering a weird breakdown on the air. He's up against the godfather of Sonoran desert locavoracity, Janos Wilder. Who knew that javelina fois gras with an ocotillo roux could be so delish? He might be down to one restaurant at the moment and even though it's a great one, we wouldn't be surprised if something's in the works.

We love all our former Wildcat superstars, but Jenny Finch has a special spot in our hearts for bringing home the Olympic gold for our country. But how will her astonishing fastball match up against our own Cal Worthington, local auto dealer Jim Click? Not only has he been selling cars on our TV screens since forever ago; he's also a GOP fundraising heavyweight and, evidently, quite the expert in judging salsa.

Richard Carmona is a Green Beret Vietnam veteran, SWAT team member, former surgeon general and all-around bad-ass. His might not have gotten over the top in that Senate run, but he's the closest thing to Chuck Norris that we have in this town. He's facing Native American author and poet Leslie Marmon Silko, who has actually been certified as a genius by the MacArthur Foundation, which is impressive to people like us, who were lucky to get through high school.

Joey Burns of Calexico is our local rock 'n' star and our worldwide ambassador, spreading the sound of Tucson across the globe and doing charity benefits when the band plays a hometown show. (We'd include Calexico drummer John Convertino in the competition alongside Joey because it's such a collaborative act, but John moved off to Ohio last year.) Joey faces Lisa Frank, who built a sticker-book empire in Tucson by realizing how much little girls love unicorns and rainbows. Even though she left behind a giant mostly empty dolphin-covered building by the airport and a number of dissatisfied former employees, there's no denying her place in pop culture history.

Congressman Raul Grijalva has risen to the top of the progressive caucus in Washington, but he lost points with us when he switched up his bushy signature mustache to the more well-trimmed version he seems to be sporting these days. Grijalva wins whenever his name is on the ballot, but he's never faced the likes of Andrew Weil, the holistic doc and author who can more than match Grijalva when it comes to facial hair. Weil is at least a semi-official friend of Oprah, which might power him past the people's representative.

It's tough to choose among UA basketball players for the top local celeb spot, but NBA star Derrick Williams reaches the top of the leader board with his recent decision to open a downtown urban streetwear shop. He's up against Max Cannon, whose syndicated Red Meat cartoon appears in alt-weeklies across the nation. Max also helps to fuel local film, while ready to bang the gong at First Fridays at the Loft each month.

Linda Ronstadt may be happier living in the Bay Area these days, but we're still gonna claim her as a Tucsonan, given how deep her roots go. But that come-and-go lifestyle may put her at a disadvantage against UA sportscaster, rugby coach and PR gun-for-hire Dave Sitton—or, as he's known by some local barkeeps, Mr. Guinness.

UA Basketball Coach Sean Miller may have only been here for a few seasons, but taking the Cats to the Final Four in his first year goes a long way toward winning over the Wildcat Nation. But he's up against a whole crew of musicians in the form of Mariachi Cobre, the Tucson-born outfit that's now repping for the genre at EPCOT Center in Florida. That's no Mickey Mouse stuff!

Former UA swimmer Amanda Beard holds more than a half-dozen Olympic medals and is hot enough to end up in the pages of Playboy. But the Sports Illustrated swimsuit model's greatest challenge might be getting past Tucson Appliance owner Chris Edwards. We love how this Regular Joe is happy to dress up like the Incredible Hulk, Bill Murray or whatever goofy gimmick he has up his sleeves. Edwards reminds us of a bygone era of kitschy TV ads which might help him sell his way into the next round.

Today star Savannah Guthrie has hit the big time, but she still gets back to the 520 for the occasional holiday celebration or commencement speech. As long as we still run into her at Epic Café, she's surely a Tucsonan. But can she stand up against Ka'deem Carey, the nation's leading rusher and a 2013 Heisman candidate? One thing is for sure: She has better manners when she attends UA basketball games.

UA Football Coach Rich Rodriguez has turned around the program. He'll be the unofficial mayor of Tucson if he keeps up winning ways and continues to fill those seats at Arizona stadium. But can he bring down best-selling mystery writer J.A. Jance, whose legions of fans flock to her appearances at the Festival of Books each year?

Mark Kelly is both a retired astronaut and an Iraq combat vet, but his new claim to fame is being a leader in the fight against gun violence alongside his wife, Gabby Giffords. Little known fact: Kelly commanded the space shuttle mission that fixed the toilet at the space station. But is he too new to Tucson to defeat the Ooh-Ahh Man? UA booster Joe Cavaleri enlivened basketball games for decades before retiring this year. He's not the type of stripper we usually look for, but we're a sucker for striped socks. Will the wave of goodwill that accompanied his fade from the spotlight power him to an upset? 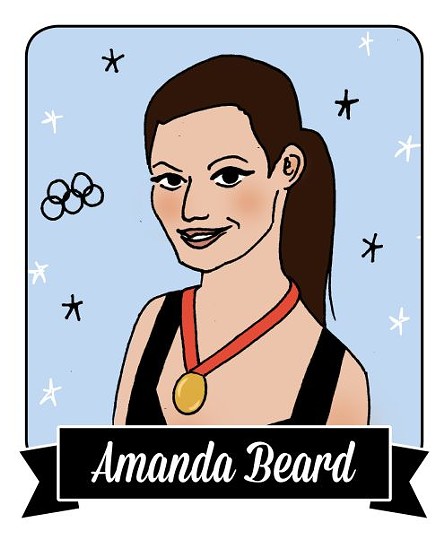 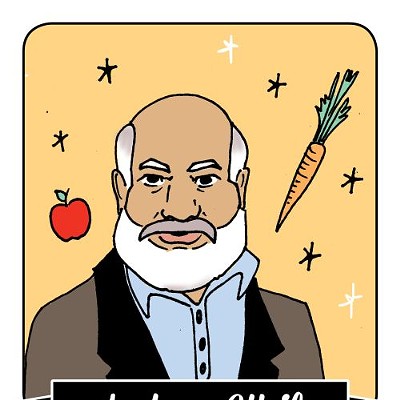 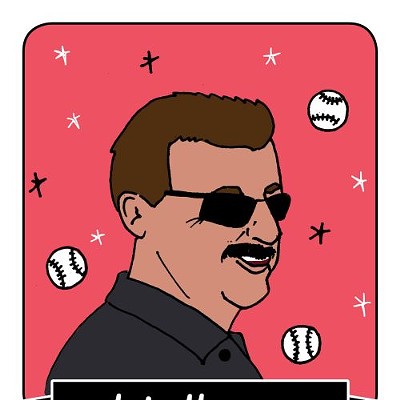 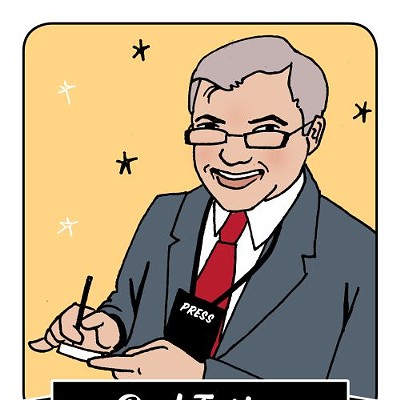 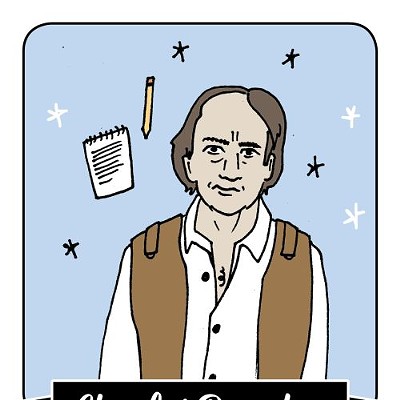 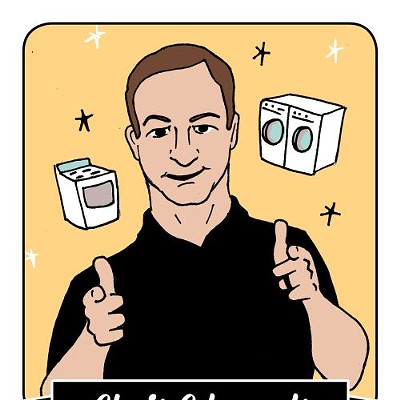 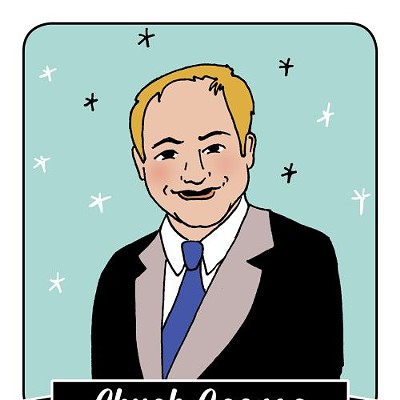