The Top Seven Things About SXSW 2019

In one freelancer’s humble opinion

Ah, SXSW. Shall I compare thee to a summer's day? SXSW isn't easily compared to anything, really. In fact, it's not even easy to describe. Phrases like "swarming the streets," "exists outside of time" and "capitalist wonderland" are floating around in my brain, floating among songs and lyrics that have been stuck in my head since we were at the festival weeks ago. Sometimes I'm not even sure whether it really happened. But, if it did, here were some of my favorite parts.

1. Everywhere's a venue. Not only does it seem like everyone in Austin is a musician during SXSW (shoutout to one of our Uber drivers, who has an audition for a grad program in music performance sometime this month), but every place in Austin becomes a place for musicians to play: a hotel lobby, a coffee shop, an open field, the 18th floor of a hotel. There's no escaping the music, but there's also not many people around who would want to. 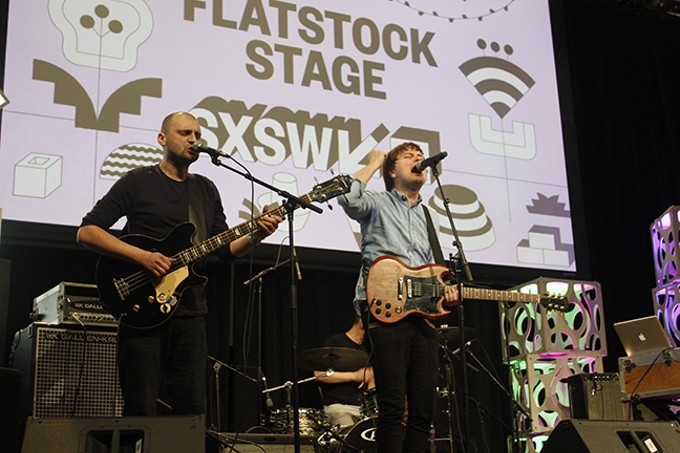 2. Trupa Trupa's delivery on a promise. There's a big room in the convention center called the Flatstock, where artists sell their wares and mostly music posters. There's also, of course, a venue in the middle of the room where bands play shows during the day. Polish rock group Trupa Trupa (which translates literally to "corpse corpse"), played a short set that made me feel hyper and like I was floating at the same time. At one point, frontman Grzegorz Kwiatkowski introduced a song: "The next song," he cried into the microphone, "is called 'Snow.' And it's about snow. Surprise! From, Poland." One of the song's lyrics repeats, "I've got nothing to hide, oh, I've got nothing to hide." And they didn't. They told us they would give us a song about snow, and they gave us a great song about snow.

3. Gaelynn Lea's grace. We'd just finished watching a moody, ambient show by ORI, a musician from Jerusalem who's often compared to James Blake, at a stage hidden behind a coffee shop, and were waiting for the next act: Gaelynn Lea, a violinist who won NPR's Tiny Desk contest few years back. Then, Lea herself came into the room, announcing that she'd actually be performing in the front area of the coffee shop, because the stage she was scheduled to perform on wasn't accessible. You might have read about Lea last year in the Weekly in advance of a show she did at Club Congress in Tucson, and if you did, you also know she has a genetic condition called Osteogenesis Imperfecta, which causes complications in the development of the bones and limbs, so she uses a wheelchair. She's also a huge advocate for disability rights, so the accessibility issue felt especially egregious, at least to me. But Lea handled it like a pro: She worked something else out and put on a killer show, joking with the audience and having us close to tears from how beautiful her violin playing was in turn. She even played "I Wait," a song she wrote about the disability rights movement.

4. Schaeffer the Dark's Lord enthusiasm for enthusiastic consent. At SXSW's annual nerdcore showcase, a group of talented rappers including LEX the Lexicon Artist and MC Frontalot got together to share their sick beats about things like their cats and hating other people's blogs. Schaeffer the Dark Lord, a middle-aged guy vaguely reminiscent of Bill Nye, the Science Guy, took the stage to perform his song "Yes," which is all about the importance of enthusiastic consent and open communication between sexual partners. "And we go five, six, seven to the eight / "No means no" is never up for debate / And the lack of a "no" isn't the same as a "yes" / And a "yes" isn't the same as an "oh my God, yes!" The song had me screaming along with it even four days into SXSW, after midnight, when I was tired in the way one can only be when they've spent the last four days wandering through a city with a nearly uninterrupted stream of live music, Tex Mex and exotic drinks.

5. The star sign language interpreters. There's a big, outdoor venue where some of the more popular acts perform—last year, we saw Los Lobos. This year, it was Andrew Bird. On either side of the stage at these big, open-to-the-public performances, are the most enthusiastic sign language interpreters I've ever seen. These people are dancing, these people are telling stories with their faces, and these people are capturing my attention even as Andrew Bird is showing off his mad whistling skills center stage. It was a shining example of how we can all stand to benefit from inclusivity and accessibility, because these performers helped me enjoy the show on a whole new level.

6. Efelante being young, wild and free. Ranging from the ages of 17 to 20, none of the members of the band Efelante, in from Mexico, were old enough to drink, but they were certainly old enough to rock. At one point during their set on the International Day Stage, the vocalist and bass player took a break between songs to race each other down the aisle and back to the stage, the vocalist's blue hair flying in the air conditioning. Ah, to be a teenager on an international road trip with your friends to play rock 'n' roll music. The audience was as giddy and wide-eyed as they were.

7. These disruptive, innovative, synergistic pins. We weren't there for the "Entrepreneurships and Startups" part of SXSW, but elements of it seeped through everywhere. In a corridor of the convention center, there was an interactive display where passersby could pick one of six skill sets they thought would be most important for the future of society: Empathy, data literacy, critical thinking, purpose-driven entrepreneurship, multidisciplinary collaboration and divergent thinking. A true case of saying words with far more syllables than meaning. Fellow reporter Jeff Gardner and I made sure we collected all six of the available pins between the two of us, though, because who among us doesn't have a denim jacket or backpack that couldn't benefit from a "multidisciplinary collaboration" enamel pin?