Heemee Bakery is a new coffee and pastry option downtown 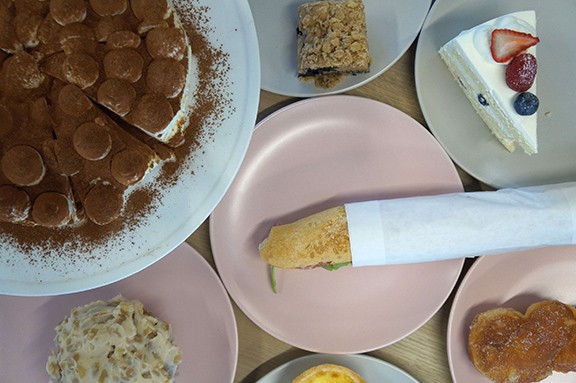 Downtown has become quite a food destination in recent years, with everything from high-end steak and seafood joints to humble coffeehouses offering a hot cup of Joe along with pastries and sandwiches.

In the latter category is Heemee Bakery, a lovely shop on the corner of Stone and Congress is more akin to something you'd find in a quaint small town or tucked away in an Asian neighborhood.

Heemee is named after its owner, Heemee Kim, who hails from Korea. Kim taught herself to bake from cookbooks and internet teachings after the closure of a business she operated with her husband out in Oro Valley. With some additional time on her hands, Kim put her lifetime love of sweets and cooking to work, infusing French and Asian techniques into her baking. She quickly earned a following not just from friends and neighbors, but from her YouTube channel.

Heemee knew that she was on to something special when her online subscribers began to grow and people started paying for her goods instead of just accepting them for free during test phases. That's when she started thinking of opening up her own place. With help from her son David, who is studying architecture, they found the Congress location and moved in with a bit of luck.

The landlords had wanted a corporate fast-casual operation to appease the daily workers who walk by that spot Monday through Friday. With some persuasion, a solid business plan and interior design by David, Kim opened Heemee's quietly before the summer months hit this year. And, as fortune would have it, the downtown crowd took to it almost immediately.

Immediate bliss usually comes in the form of one's first mug of coffee. Having spent time in California studying his craft, David suggested Heemee serve coffee made from beans sourced from the Santa Cruz-based coffee company Verve. To go along with that cup of coffee, you can consider one of the house cakes, which revolve almost daily depending on Kim's whims and seasonally available ingredients.

Other options include scratch-baked scones, donuts, tarts and cupcakes, some of which are vegan due to the use of rice flour and a few Heemee secrets. At 11 a.m. each day, Kim reveals the secret of that day's sandwiches, which are light, uncomplicated and elegant, whether they are vegetarian or filled with some kind of meat. And if you're more in the mood for eggs, there's a quiche of the day.

Kim also offers a Korean dessert delicacy called Bingsoo, a combination of shaved ice and milk. Traditionally, it's topped with red beans, but Kim offers something more palatable to Tucson tastes. She tops her Bingsoo with green tea, fresh fruit or even cookie crumbles and chocolate. It may sound a little weird, but when you try one, you will discover Bingsoo is a refreshing way to finish a meal at Heemee.