The Sun, the Moon and the Starry Skies Above 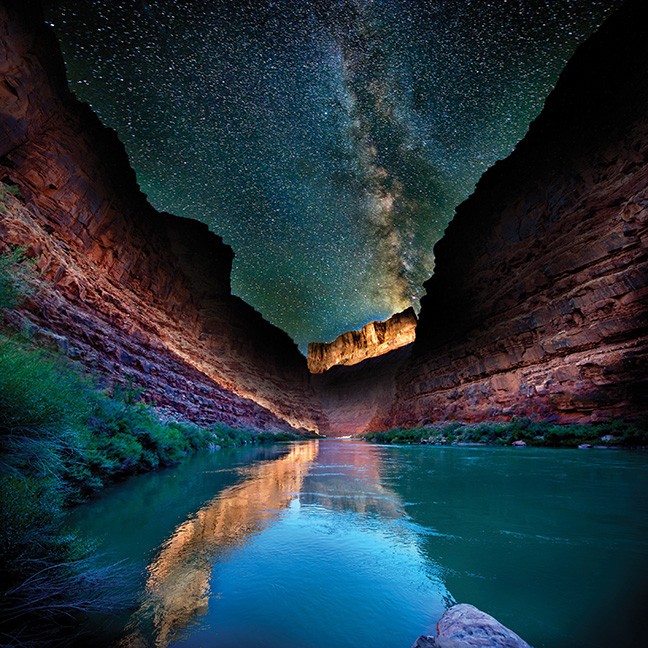 EXTRA: Additional images by the artists are on display at the Extension Gallery, Tucson International Airport, through Oct. 25.

The sky's the limit in Cielo.

But that's the only boundary in this lovely Bernal Gallery exhibition, whose title is the poetic Spanish word for "sky."

Invited to submit artistic interpretations of the wild blue yonder, six artists—three photographers, two multi-media sculptors and one painter—soar all over the celestial map. They've crafted images of the heavens' many glories, from red moons to drifting clouds to star cascades. And they've also honored the power of terrifying lightning storms and tornados.

The artists have aimed both for playfulness and for the sublime, and they've used every medium possible, from bobby pins to oil paint to copper to film to elaborate digital techniques.

Rebecca Wilder, a Tucson painter new to me, paints classic views of puffy clouds skittering across cerulean skies. Her four oils on canvas glow in the sunlight or turn dark in the wake of approaching storms. "Monsoon" does both: It has a single giant cloud, golden on one side and damp purple on the other, pregnant with rain ready to drop. I'm ready to believe that her painted prayer, "Bring on the Rain," with its white angel clouds floating over a supplicant saguaro, is what ushered in last week's bountiful storm.

If Wilder's technique is traditional, Io Palmer's is the opposite. Palmer makes clouds not of paint but of bobby pins—thousands and thousands of them—glistening in shimmering 3-D works on the wall. Palmer, a UA MFA grad who now teaches at Boise State University, creates wooden, cloud-shaped bases for the bobby pins, once a staple of women's hairdos, and then carefully attaches the pins to the wood in rippling cascades. "Bobby Clouds (Gold)," glimmers in gold and silver; "Bobby Clouds (Purple)" uses pins painted a rich royal purple.

But those eccentric bobby pin works are not Palmer's only innovations. At the center of the gallery is her big installation "Wrought Iron Gates, White Picket Fences," made of painted papers and wood. Dangling on strings attached to the ceiling, the white structures are threaded through with delicate paper shapes in pale green, purple and gold. Like clouds, they flit in and out, gently swaying in the breeze of the AC.

Joan Sullivan Marum, a Tucsonan who got her BFA at the UA, also makes art that's playful and inventive. Working with painted metal and wood, she builds free-standing towers that house her clouds. "Sky and Clouds II," a rectangular sculpture painted sky blue, has metal clouds arranged in pleasing rows that jut out into the air.

Photographer Alejandra Platt-Torres, one of three innovative photographers in the show, splits her time between Hermosillo and Tucson. But she bridges this gap in photos that merge Sonora and Arizona.

Take "FireMoon," a magisterial digital image of a fierce orange moon hanging in a midnight-blue sky. The lower part of the photo is a black-and-white of the Cerro Colorado crater in El Pinacate, Sonora; the top, shot in color of the North Rim of the Grand Canyon, is a vast expanse of velvety sky. The fiery color of its moon is real, Platt-Torres explains; it came from a blaze on the South Rim.

But the photographer transcends reality when she combines the two images. Through the magic of Photoshop, the giant Arizona moon rises out of the Mexican crater. The piece unites two countries, bringing them together under a single moon.

The exquisite "GrayFemaleWhale" may not repair nations, but it is an extraordinary close-up of a mother whale leaping up out of the waters off Baja California. It's so detailed we can even see the whale's eye. Shot entirely in Baja, the work combines a black-and-white photo of a gray sky with a color photo that adds a dash of blue sea.

The aptly named "Electric Monster" documents a huge cluster of lightning bolts near Eloy in 1996. Casting off a terrifying purple and white light, the gigantic lightning cluster dwarfs what seems to be a miniscule human-made tower below. But the tower, Willett notes, is no small thing. It's 75 feet high.

On a tornado chase in Oklahoma in 1991, Willett shot "Golden Light, Laverne, Oklahoma." Dark brown clouds on either side open to a radiant light shooting up toward the heavens. This stunning picture about nature's power recalls the works of the 19th-century painters of the sublime.

Those clouds in Laverne, Willett says in his artist statement, "were the most beautiful clouds I have ever seen. It was like looking up into heaven all in golden light."

William Lesch, a Tucson photographer with an international reputation, also trades in beauty. A few years back, he concentrated on glorious black-and-whites of mountains and cities, often taken from a small plane piloted by his son. Recently, he has returned to the brilliant color of his earlier years, developing ever more complex techniques to give natural places a beauty that's ever more unearthly.

The new suite of digital works, most of them in luminous blues and orange, were printed onto a thin base of aluminum or copper painted with gesso and run through an archival pigment printer. All six exhibited here were shot on kayaking trips to the Grand Canyon; Lesch learned to kayak, he says, the better to delve into the canyon's most remote recesses.

"Milky Way and Sunset on Cliffs, Looking Downstream at Mile 18 Camp, Grand Canyon," from 2014, is positively iridescent. Printed on a thin stretch of copper, the quintessential Arizona ore—with added patinas of silver and gold—the work pictures some of nature's greatest beauties: a river that reflects light and color, cliffs glowing gold and a cascade of stars twinkling across the deep-blue cielo.