The Story of Mac & Jill

The Story of Mac & Jill 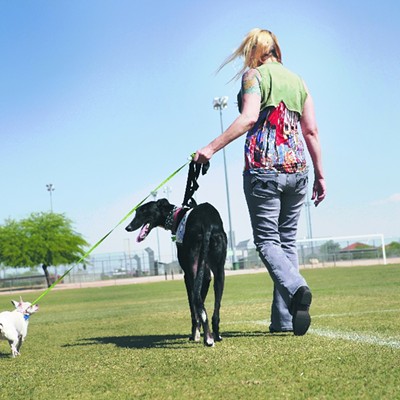 Jill Macdonald embraces Mac and her Chihuahua, Haley, together for the first time. When Macdonald experiences PTSD-related stress, Mac will be able to sense the changes in her feelings, and he will instinctively know to comfort her. According to Operation Wolfhound's Alicia Miller, about 85 percent of veterans with post-traumatic stress disorder will respond to a psychiatric service dog.

We've all heard heartwarming pet-adoption stories, in which it seems like fate has a lot more to do with the pairing than happenstance.

However, the story of Jill Macdonald and a greyhound named Mac makes the word "fate" seem like an understatement.

Jill Macdonald, an Army veteran, was diagnosed with PTSD in the late 1990s. When Macdonald visited a Veteran Affairs psychiatrist in 1998 for issues related to a wrist injury, she also described extreme cases of road rage, and violent, erratic behavior. The VA psychiatrist linked this behavior to a sexual assault that Macdonald experienced at her graduation from the Army's combat-medic school in 1983.

"Most vets have PTSD from bombs going off," Macdonald said. "I was sexually assaulted by three combat medics in the barracks, and that's why I have it."

Macdonald was diagnosed with a form of PTSD known as MST—military sexual trauma.

"Because I knew who they were, and because they were medics is the reason I am so hyper-vigilant today," Macdonald said. "I want to bring it to light, because I know there are more women out there who are afraid to bring up that they were sexually assaulted in the United States Army by one of their own."

Macdonald's PTSD makes it challenging for her to deal with stress. She has been on medication, and has been sleeping with a gun at night.

Arizona Greyhound Rescue works with volunteers to find homes for greyhounds that raced at Tucson Greyhound Park. At the Arizona Animal Fair last year, Jean Williams, the vice president of AGR, met Alicia Miller; her husband, Robert Miller; and their daughter, Rhiannon Miller, who are co-founders of Operation Wolfhound, a nonprofit that trains dogs to become service pets for veterans suffering from post-traumatic stress disorder.

Williams had been struggling to find a home for Mac, an AGR dog diagnosed with separation-anxiety disorder. Mac was bouncing around from foster home to foster home, destroying furniture and, in one case, a laptop.

The Millers say that veterans with PTSD and dogs with separation anxiety make perfect pairings: The dogs need owners who will never leave them alone, and the veterans can use the dogs as calming extra sets of eyes.

In other words, Macdonald and Mac have the potential to become a perfect pair, and as a result, Mac became the first greyhound from Arizona Greyhound Rescue to go through the Operation Wolfhound training.

Macdonald began that six-month training process with Mac. Macdonald, Williams and the Millers met weekly at malls, parks and restaurants while Mac trains to become a psychiatric service dog for Macdonald.

However, that process has proven to be rather challenging.

Macdonald works as a massage therapist at a local salon, and Macdonald's boss wouldn't allow her to bring Mac to work. As of this writing, that conflict remains unresolved.