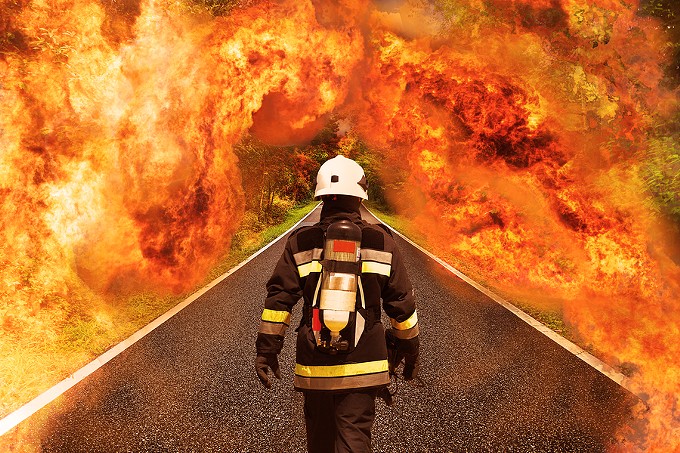 BigStock
It’s a shame the Pima County Republican Party isn’t there to back this guy up.

The battle over Prop 101, which would raise the sales tax within the city of Tucson by a half-cent for five years to pay for a major street-repair initiative and new equipment for the police and fire departments, is breaking down along curious battle lines.

On the side urging support for the proposition, you have most of the organized business community—the Tucson Metro Chamber, the Hispanic Chamber of Commerce, the Southern Arizona Leadership Council, the Southern Arizona Homebuilders Association, apartment kingpin Humberto Lopez, et al.—alongside Mayor Jonathan Rothschild, the Tucson City Council, the police union, the firefighters union, the Pima County Democratic Party and lib publications such as the Tucson Weekly and Arizona Daily Star.

On the side that's hoping it will go down in flames, you have the Pima County Republican Party, the Pima County Green Party, the Tucson Bus Riders Union, LUPE Tucson, Tucson SURJ, Black Lives Matter Tucson, Jewish Voice for Peace, and the Arizona Palestine Solidarity Alliance.

As you look at that list of opponents of Prop 101, you can't help hearing in your head the old Sesame Street song: One of these things is not like the others...

We're hardly surprised to see most of the organizations on that list have a problem with providing the cops and firefighters with decent equipment to protect public safety or to fix roads. Most of them would rather see the cops show up on buses and the firefighters arrive on bicycles than spend another dime on the roads.

But we never thought we'd see the day when the Pima County Republican Party would turn its back on local cops and firefighters and turn against the business community to embrace the Keep Tucson Shitty movement. It's truly sad when local Republicans become so determined to oppose taxes in all forms that they won't support providing cops with bullet-proof vests, outfitting ambulances with modern life-saving equipment to rescue people who have heart attacks and spending public dollars on infrastructure to build some roads, create some jobs and make it easier to recruit more businesses to move to Southern Arizona.

Turn in your ballot by Tuesday, May 16.

Congresswoman Martha McSally (R-AZ02), after weeks of declining to reveal whether she supported the latest iteration of the Trumpcare bill that came back to life last week, turned out to be one of its biggest cheerleaders behind closed doors.

Associated Press reporter Erica Werner tweeted ahead of Thursday's vote that sources in the backroom where Republicans psyched themselves up to pass Trumpcare said McSally told her colleagues that it was time to vote in favor of this "fucking thing."

McSally used less salty language in a prepared statement explaining her vote, saying that the legislation was "not a perfect bill, but it is better than a failed system. As this legislation has taken shape, I have tirelessly advocated for my constituents. I have voiced concerns, identified constructive improvements, prevented destructive additions, and ultimately secured victories for the vulnerable in our communities totaling $165 billion." And she promised to "continue to work with state and local stakeholders and closely monitor this bill throughout the legislative and implementation process to ensure that my constituents have access to the care they need, that the most vulnerable are protected, and that Southern Arizona is better off in the future."

That's quite a defense of a bill that McSally wouldn't even publicly admit she was supporting before the vote took place.

Remember in the old days, when Republicans complained that the year of hearings and markups that the ACA went through was a rushed process that shoved healthcare reform down America's throat? The legislation to repeal it went through the House of Representatives so quickly that the Congressional Budget Office didn't even have time to score it.

But the CBO did score an earlier, less-brutal version of the legislation, which had the support of fewer than 20 percent of Americans in some polls. That particular analysis noted that the legislation would result in 24 million fewer Americans with health insurance by 2026—and that seniors not yet eligible for Medicare would see their premiums skyrocket if they wanted to buy insurance because insurance companies would now be able to charge older Americans five times as much as young people, instead of three times.

Or, as Kathleen Sebelius, the former Kansas governor and U.S. secretary of Health and Human Services in the Obama administration, said during a telephone town hall meeting with Southern Arizonans who live in Congressional District 2 this week: "We don't know how much worse this version is than the last, but we know it got even worse."

"I don't think in all of my time in office—and I've worked on health care for about 30 years—that I've ever seen a bill that would do so much damage to American families," Sebelius said.

It might also do some damage to McSally's re-election chances in the highly competitive Congressional District 2. Following the vote, the Cook Political Report shifted CD2 from the "Likely Republican" column to the "Leans Republican" column. Still, that's not an especially disturbing change for McSally, who has a good profile for CD2 and the capacity to raise lots of money for her re-election campaign. She's also bolstered by the current lack of strong challengers. But she's never faced the kind furious opposition that the healthcare issue has brought to her doorstep in the form of regular protests.

Much will also depend on what the Senate does with the fucking thing the House has dropped on its doorstep.

But the idea of leaving questions about pre-existing conditions, essential health benefits and Medicaid up to the states doesn't bode well for Arizonans.

A quick recap of Arizona's history of providing Arizonans with health insurance through Medicaid: Arizona was the last state in the union to sign up for the program and even then, it was a skimpy program; after voters expanded the program in 2000 to include any Arizonan below the poverty level, state lawmakers cut it back drastically in 2010; after the courts ruled that cutback was illegal, state lawmakers ignored the ruling; the majority of Republicans fought against expanding the program under Obamacare; after Gov. Jan Brewer successfully got Democrats and a few Republicans to go along with the Obamacare expansion, the vast majority of Republican lawmakers sued to block the expansion; and Republican lawmakers have since tried to attach all sorts of strings to Medicaid eligibility.

So we'd say it's safe to assume that the Arizona Legislature is not going to try very hard to ensure that low-income Arizonans have health insurance if the federal government doesn't require it.

Just getting caught up on a few overdue notes on this year's Tucson City Council election:

• Ward 3 promises to be the most interesting race of the season, given that Councilwoman Karin Uhlich's retirement means there's an open seat up for grabs.

Three Democrats are in the hunt: Paul Durham, an attorney, solar power advocate and former aide to one-term councilwoman Nina Trasoff (2005-2009); Tom Tronsdal, a local business owner who has also practiced some law; and Felicia Chew, a local schoolteacher.

As of the end of March, Durham was leading the fundraising race. He'd raised $23,046 and still had $15,214 in the bank. He'd also applied for city matching funds, with at least 200 contributions of at least $10 from city residents.

Tronsdal has also applied for matching funds, but his fundraising numbers trailed Durham's. Tronsdal had raised $15,403 and had $8,005 in the bank at the end of March.

No Republican has yet come forward to run in Ward 3, but Northwest Fire District firefighter Gary Watson has filed to run as an independent. Watson was not required to file a finance report because he'd gotten into the race after the March 31 deadline.

Libertarian Julian Mazza is also still seeking a spot on the ballot, but reported raising no money for his campaign.

The Weekly previously mentioned that Ward 6 Democrat Steve Kozachik was seeking a third term. Kozachik, who has pledged to run without raising money for a campaign, is facing potential challenges from Republican newcomer Mariano Rodriguez and Green Party candidate Michael Oatman. Neither Rodriquez nor Oatman were required to file campaign finance reports.

More »
More The Skinny »
All News & Opinion »
Comments (11)
Add a comment
Subscribe to this thread:
By Email