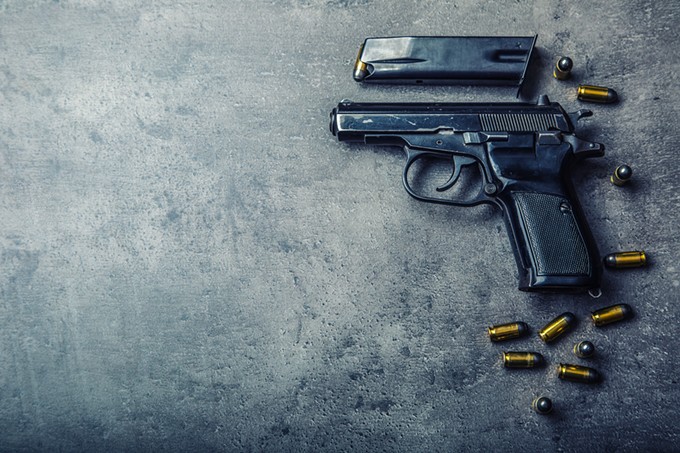 BigStock
Hey Crazyland, we know you understand local control. How about practicing it?

The city of Tucson and the state of Arizona are once again tangling over guns—with more than $100 million annually on the line for the city.

The fight is over the city's policy of destroying firearms that come into the possession of the Police Department, whether they were seized in crimes or turned over by citizens who don't want them anymore.

This gunfight was triggered by a complaint by state Rep. Mark Finchem, a Christian conservative Republican from Oro Valley who asked Arizona Attorney General Mark Brnovich to withhold all of the state-shared revenues that the city receives until the city stops destroying guns and instead starts auctioning them off to gun dealers.

The legal dispute is the result of a new state law, SB 1487, passed earlier this year to punish local jurisdictions that don't go along with efforts of state lawmakers to micromanage smaller jurisdictions in a variety of matters. In recent years, lawmakers have increasingly sought to strip away local control, whether it revolves around whether cities and towns can ban plastic shopping bags, enact ordinances related to tracking energy use, conduct elections when they want to or, yes, destroy guns.

Under the terms of the new law, jurisdictions that defy state lawmakers now face having all of their state-shared revenues—dollars that come from their residents' income taxes or other revenue streams—stripped away. In the case of the city of Tucson, that annual payout from the state is more than $100 million.

Nonetheless, Tucson Mayor Jonathan Rothschild and the Tucson City Council voted 7-0 to not only stick with their ordinance allowing the destruction of seized guns, but also to sue the state over whether SB 1487 is even constitutional.

The city maintains that it has powers under its charter—essentially, the mini-constitution of the city—to handle its own affairs without interference from the state. (If that argument sounds familiar, it's because state lawmakers frequently assert a similar version of "local control" when it comes to defying decisions made by the federal government in Washington.)

The city filed a complaint in Pima County Superior Court last week arguing that the courts remain the proper venue to sort out whether a city ordinance is in violation of state law rather than the system set up under SB 1487, which allows the Arizona Attorney General to make the call after receiving a complaint from a state lawmaker.

Furthermore, lawyers for the city argue that there's another provision in SB 1487 that is unconstitutional: The requirement that a city or town post a bond equal to half of their annual state-shared revenues if they want to fight a legal action taken against them under the new law. That mean to even get a day in court, the city has to pony up a bond in the neighborhood of $56 million.

"The bond is an unconstitutional filing fee, serving as a barrier to the city's access to judicial relief and is intended to prevent the city from presenting its positions and arguments in a special action brought by the Attorney General," attorney Richard Rollman wrote in the city's complaint. "The purpose of the bond requirement is to coerce the city to eliminate actions found to be objectionable by a single legislator even if the Attorney General cannot determine whether the city action in question actually violates Arizona law."

Rollman noted numerous examples during the debate on legislation and comments from Gov. Doug Ducey's State of the State address that backed up the assertion that the law was meant to punish municipalities and discourage them from challenging the statute.

Meanwhile, Brnovich concluded that, based on Finchem's complaint, the city may have violated the terms of SB 1487 and has filed a special action in front of the Arizona Supreme Court to strip the city of its state-shared revenues until it repeals the ordinance allowing for the destruction of guns.

Brnovich says the disposal of guns is a matter of statewide concern because the city's decision to destroy the guns it has means that there are fewer guns available for Arizonans and if there are fewer guns out there, society on the whole is less safe—or as he put it in his legal filing with the Arizona Supreme Court, "the state believes that increasing the supply of legal firearms is in the interest of public safety."

On top of that, Brnovich argues that the destruction of guns by the city of Tucson distorts the gun market and makes guns more expensive. State laws that require the city to sell seized guns to a firearms dealer "ensure that the thousands of legal guns that TPD acquires each year remain available to Arizona's law-abiding citizens," Brnovich told the court. "This may increase the supply of firearms, lower the cost of firearms, and generally facilitate citizens' right to bear arms."

Because, as we all know, it's just so darn hard to come by a firearm in the state of Arizona.

Tucson City Councilman Steve Kozachik, who has been one of the most vocal supporters of finding ways to reduce gun violence, said he expected Brnovich's push to punish the city.

"I'm not surprised because he's so beholden to Gov. Ducey and the fringes of the state Legislature," Kozachik said. "But he dodged the whole issue of constitutionality. He's the people's lawyer, not the Legislature's lawyer. He should be guarding the constitution before he starts guarding guns."