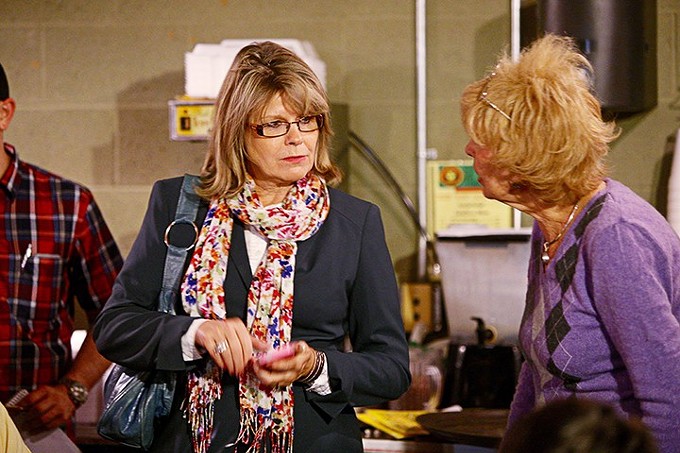 Why on earth did Ally Miller fall for her aide's ridiculous stories and when will she apologize?

The strange tale of Pima County Supervisor Ally Miller and the Arizona Daily Herald appears to be winding down now that Miller's former press aide has confessed to lying about his involvement in the short-lived online news blog.

The story has been a crazy one and there's scarcely space to recap all the lunacy that emerged from Miller's office over the last month (you can read our past coverage online if you want all the screwy details), but the bottom line is this: While in Miller's employ as a communications aide, Timothy DesJarlais also tried to masquerade as Jim Falken, the editor of a new online news site, the Arizona Daily Herald, that planned to cover Miller's reelection campaign.

Unfortunately for DesJarlais, he used the same alias he had used for other online endeavors, so it didn't exactly require a detective to figure out that Falken and DesJarlais were one and the same. Nonetheless, once confronted by Dylan Smith of the Tucson Sentinel, DesJarlais denied any involvement and launched into a series of increasingly absurd lies and actions: First, he took down the website; then he told Miller that GOP activist John Dalton had stolen his online alter ego to set him up; then—upon Miller's urging—he filed an FBI report that his identity was being stolen; then he sent out more emails under another fake identity who took credit for website; then he quit his job at Miller's office; and then, last Friday, June 10, he relaunched the Herald website under his own name in the hopes that it would throw everyone off the scent.

Finally, over the weekend, he sent a confession letter to Miller, who passed it on the Ally-friendly Arizona Daily Independent. In his letter, the 19-year-old DesJarlais said that when people began confronting him about the Herald website, "I made the fatal mistake of lying ... and saying I had nothing to do with the website."

DesJarlais told Miller: "I wanted so badly to tell you the truth but I was afraid of hurting you like so many others had done." He added that he had deep admiration for Miller, especially after she "stood by and defended me, even when others turned against me, and how even now, you still maintain my innocence until proven guilty."

And so it is now pretty much indisputable that DesJarlais was behind the website and all the lies all along. In fact, the only people DesJarlais was able to fool with all this nonsense were Miller and her various allies in the idiot sector of the local media, such as the Arizona Daily Independent's Loretta Hunnicutt, the beautifully ill-informed James T. Harris at 104.1 FM and the dopes on the morning shift at KVOI, including Chris DeSimone and Shaun McClusky, who swallowed all this bullshit hook, line and sinker. They should all be embarrassed, but instead they continue to blame their inability to see the obvious truth in front of their faces on reporters at the Weekly, the Tucson Sentinel and the Arizona Daily Star. First, we were all wrong. And then when it turned out we were right all along, they said we had no business telling readers about this nonsense.

But the real shame should be on Miller herself. As usual, she's climbed up on her cross and branded herself the victim in this case, even though anyone with a lick of common sense could see what was going on. Her judgment throughout has been atrocious: She accused Dalton of trying to sabotage her office and announced on Facebook that he "wasn't as clever as he thought he was"—a particularly amusing moment in light of what we now know. (And while DesJarlais has apologized to Dalton via email, he has not, of as of our deadline, heard from Miller regarding all her wild, reckless and untrue accusations against him.) She has refused to release public records to the Star and Sentinel until they cough up $1,600 in fees. And on Facebook, she said the reporters working on the story were "smearing the name of a young man with a bright future ... You ALL ought to be ashamed of yourselves!"

On Friday, June 10, however, Miller called for DesJarlais to face federal charges of lying to the FBI, telling Harris' radio audience "I want him prosecuted. ... It's interfering with the office of an elected official, it's interfering with an election."

Here's the thing: Miller didn't have to believe her aide's ever-expanding collection of lies that were obvious red flags, and she certainly didn't have to file a false report with the FBI that has now put him in legal jeopardy. She's the one who should be ashamed—and who should be apologizing to the press instead of blocking their access to public records.

John Dalton, whom Miller accused of being behind the entire plot, told the Weekly he hopes that DesJarlais has learned a lesson.

"As for Ally Miller, I hope to hear an apology soon and I hope she learned a lesson, too," Dalton said.

At last week's meeting, the Pima County Board of Supervisors voted 4-1 to approve a budget that reduces property taxes for the upcoming year.

The tax cut was made possible by the county's recent win against the state in a court case over whether state lawmakers could legally transfer certain school expenses to the county.

"We did what we needed to do, given the economic climate today," said Supervisor Sharon Bronson. "But at some point, we have to put the public back into public policy, because we're not dealing as we should with our infrastructure issues."

Zona Politics with Jim Nintzel airs at 8 a.m. Sunday on the CW Tucson, Channel 8 on Cox and Comcast and Channel 58 on Dish, DirecTV and broadcast. You can hear the show on KXCI, 91.3 FM, at 5 p.m. Sundays or watch it online at zonapolitics.com. This week's encore episode features Arizona Daily Star cartoonist Dave Fitzsimmons; Pima County Supervisor Ray Carroll; and retired General Hoyt "Sandy" Vandenberg Jr. and Bill Westcott, who will discuss plans for a USS Arizona memorial on the UA mall.

More »
More The Skinny »
All News & Opinion »
Comments (9)
Add a comment
Subscribe to this thread:
By Email