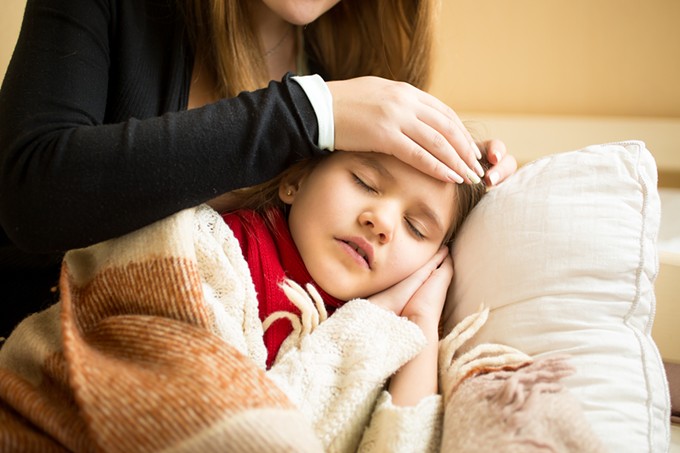 BigStock
Time for the Arizona Senate to help sick kids.

Why on earth is Sen. Andy Biggs refusing to let senators debate the restoration of KidsCare?

For all the claims that they are pro-life, Arizona state lawmakers sure do give up on kids after they're born. The state's Department of Child Safety still can't manage to investigate cases of child neglect; programs that would prevent kids from getting abused in the first place were axed years ago so the state could cut taxes for its wealthiest citizens; and now, even though the federal government would pick up the cost, legislation to help families afford insurance for their kids has stalled.

House Bill 2309 would restore Arizona's participation in KidsCare, a federally funded program that provides health insurance to children in households that earn up to 200 percent of the federal poverty level.

Arizona now has one of the highest rates of uninsured kids in the nation, which means that when kids get sick, too many moms in this state can't afford to take them to the doctor. It's bad enough to imagine what this does if a kid has an earache, but what about when they need treatment for a life-threatening disease?

It wasn't always this way: Arizona used to participate in the Children's Health Insurance Program, or CHIP, which now provides health insurance for kids between 133 percent and 200 percent of the federal poverty level, topping out at $48,500 for a family of four. (Children in families below 133 percent of the federal poverty level are covered through the state's AHCCCS program.) But under former Gov. Jan Brewer, state lawmakers froze enrollment in 2010. As kids aged out of the program, the number enrolled dropped from 63,000 kids to fewer than 1,000 now.

The federal government would pick up nearly all the cost of the restoration of KidsCare through 2019, but some Republican state lawmakers oppose it as an expansion of Big Government. Gov. Doug Ducey has avoided taking any kind of stand on the legislation, telling the press that his priority is balancing the budget, not helping out families with sick kids.

But there is bipartisan support for the legislation, which passed the House of Representatives on March 2.

The holdup now is Senate President Andy Biggs, who has shown so little concern about helping poor people with health insurance that he once proposed scrapping the state's participation in the federal Medicaid program.

Biggs, who recently announced his plans to run for Congress later this year, has yet to assign HB 2309 to any Senate committees for a hearing. If he doesn't budge, kids are the ones who are going to suffer for his ideological purity.

You'll now be committing a crime if you drop off your neighbor's early ballot at the polling place in this year's elections.

Gov. Doug Ducey wasted no time in signing HB 2013 last week, putting his signature on the bill almost as soon as it passed the Senate.

The legislation makes it a felony for a person to turn in a ballot other than their own, with some exceptions for family members or roommates.

Republicans claim they are restoring integrity to election process by preventing "ballot harvesting"—but there's no evidence that anyone was tampering with any of the ballots that were being collected and turned over to election officials.

State Sen. Steve Farley (D-Tucson) said the legislation was aimed at suppressing the vote among Latinos and other groups who often fail to turn out on Election Day.

"By taking away the practice of going door to door and collecting the ballots of people who might not otherwise be bringing them in themselves—particularly in disempowered communities where we have been successful in being able to do that—you're taking away one of the tools of being able to speak truth to power," Farley said.

The entire controversy over the collection of early ballots is relatively recent.

Way back in the early '90s, state lawmakers loosened up the early ballot rules. Before the changes, you had to present some kind of valid reason to get a so-called "absentee ballot"—you'd be out of town on Election Day or you were too infirm to make it to the polls or some similar situation. But the changes more than two decades ago allowed anyone to request an early ballot.

In the years since, the use of early ballots has skyrocketed. In 1996, about one in four voters in Pima County cast early ballots. By 2014, that number had grown to more than three out of four.

The increase in the use of early ballots has been mostly driven by sophisticated candidates and political parties, who have encouraged voters to cast early ballots as a way of developing a connection with voters and tracking their voting behaviors. The reason is simple: If they can get supporters to cast their vote early, then they know they have that supporter locked in.

But it's also far more convenient for voters, who can review long ballots with multiple races and complex propositions at their own leisure in their living room rather than have to make a quick decision while standing at a ballot box.

Both political parties, as well as many individual candidates from both sides of the aisle, have participated in ballot harvesting by collecting early ballots and turning them over to election officials.

But in recent years, Latino groups have started collecting early ballots—and given that Latinos are far more likely to vote for Democrats than Republicans, GOP lawmakers have moved to shut them down.

The first effort was in 2014, when lawmakers passed a massive election-law revamp that made it crime to collect early ballots, but also put new hurdles in the path of third-party candidates and initiative campaigns. That legislation was filled with elements that upset so many different interest groups that a massive referendum effort succeeded in putting the changes on the ballot for voter approval. Rather than face the voters, GOP lawmakers instead repealed the entire package and have been passing elements of it in a piecemeal fashion.

Last week, GOP lawmakers finally managed to pass legislation making it a felony to collect early ballots. Supporters of the law say that it will prevent any funny business from happening with ballots that are collected by political organizers, but they have yet to be able to point to any verifiable fraudulent activity.

Farley said he was "outraged" that Ducey signed the bill and "then said that it's another step toward protecting all our electoral process."

"It's another step in his Big Lie theory of governance, which is you do one thing and then you say you're doing precisely the opposite thing," Farley said.

Zona Politics with Jim Nintzel airs at 8 a.m. Sunday on the CW Tucson, Channel 8 on Cox and Comcast and Channel 58 on Dish, DirecTV and broadcast. You can hear the show on KXCI, 91.3 FM, at 5 p.m. Sundays or watch it online at zonapolitics.com. This week's guests are Congressman Raul Grijalva; J.P. Holyoke, chair of the Arizona Taxation and Regulation of Marijuana initiative campaign; and Todd Clodfelter, a GOP candidate for Arizona House of Representatives.