Is immigration reform going to be a casualty of the debt-ceiling deal?

Shortly after our deadline last week, the cooler heads among congressional Republicans struck a deal with Democrats to reopen the federal government and raise the debt ceiling.

While we know some on the right are delusional enough to call the government shutdown a Republican win, the polling numbers we've seen show that it was pretty much a political disaster for them. The GOP might well bounce back in the polls by this time next year—and the House is gerrymandered enough that a Democratic takeover remains a long shot—but right now, the party is at rock bottom with the public.

The split among Arizona Republicans is worth noting: Both Sens. John McCain and Jeff Flake voted for the deal, while all of the Republicans in the House delegation voted against it.

House conservatives are fairly bitter that they had to capitulate without getting anything in return, so they're figuring how they can fight with President Barack Obama in order to remain in good graces with the GOP base. And it appears that one significant casualty of that fight may be comprehensive immigration reform.

Obama said last week that immigration reform—along with a budget deal and a farm bill—was at the top of his agenda.

"We should finish the job of fixing our broken immigration system," Obama said. "There's already a broad coalition across America that's behind this effort of comprehensive immigration reform, from business leaders to faith leaders to law enforcement."

Obama's push—even with the support of the business community, which is actively trying to persuade GOP lawmakers to go along with it—is probably enough to harden House Republicans against any plan that includes the key point for Democrats: a path to citizenship for the undocumented people now in the United States.

But blocking immigration reform will probably, in the long run, prove just as destructive to the GOP if the party continues to alienate the growing Latino demographic.

Horne, of course, denies any wrongdoing, but a look at Yavapai County Attorney Sheila Polk's investigation into whether Horne illegally coordinated with a supposedly independent campaign committee leaves little doubt that Horne was telling a former campaign staffer, Kathleen Winn, exactly how to develop attack ads against his 2010 Democratic opponent, Felecia Rotellina.

Polk notes that Winn left a gig coordinating Horne's campaign efforts in every Arizona county on Oct. 17, 2010, to head up an independent campaign committee called Business Leaders for Arizona, which spent about $400,000 on those hit pieces.

On Oct. 20, 2010, Winn was emailing political strategist Brian Murray to hone her campaign ads at the same time she was talking to Horne on the phone. Horne and Winn have offered the hysterical defense that they were talking about something else altogether, but they're about as convicing as Jon Lovitz's old SNL character, pathological liar Tommy Flanagan.

As Polk put it in her legal assessment of the case, the facts of the case "lead to the conclusion that Winn's sworn assertions that she alone was responsible for the idea, design and production of the anti-Rotellini advertisements are patently false."

Polk's order in the case requires Horne to cough up $400,000 out of his own pocket or his campaign funds to repay the illegal campaign contributions that ended up in the bank account of the independent campaign committee. If he doesn't do that—and it appears that he's not going to write the check—then Polk says she'll pursue a civil penalty against him for three times the amount.

Polk isn't the first Republican county attorney to come to the conclusion that Horne was illegally coordinating with an independent campaign committee. Maricopa County Attorney said the same thing last year, but Horne got the decision tossed on a legal technicality.

We'll see whether Horne can wiggle out of this one, but the damage to his political reputation is severe just as he's gearing up for his 2014 reelection campaign. (And that reputation has already been battered from the allegations that he was having an affair with a woman he put on his payroll.)

A few weeks back, attorney Mark Bvrnovich announced that he planned to challenge Horne in next year's GOP primary. Bvrnovich has been a prosecutor with the Maricopa County Attorney's Office, worked for the Goldwater Institute and headed up the Brewer administration's Arizona Department of Gaming.

On the Democratic side, Rotellini wants another shot at Horne as well. She launched her campaign earlier this year and has been picking up the support of law-enforcement types along with Democratic politicos.

"Horne lied to Arizona's voters," McLeod said. "He and his cronies manipulated the election system and, after that, the justice system in an effort to avoid taking responsibility for his lawbreaking. He should have known better—and Arizona certainly deserves better. This illegal conduct wouldn't be acceptable from any candidate and it is certainly unacceptable from the state's top law-enforcement official."

State Rep. Adam Kwasman made it official this week: He sent out a press release saying he's entering the race to challenge Congresswoman Ann Kirkpatrick in Congressional District 1.

It's not as if Kwasman wasn't already in the race. While he was rolling along under the exploratory dodge—and did not file any campaign-finance reports this month—he's been making the rounds and, more recently, blasting House Speaker Andy Tobin, who announced earlier this month that he was entering the race as well.

Kwasman has been distributing a comparison piece that hammers Tobin for raising taxes, compromising on Obamacare, killing union reforms, supporting the Common Core education standards and generally being a Friend of Big Government.

Kwasman clearly wants to set himself up as the Tea Party purist who is up against the establishment in the form of Tobin.

Can Kwasman pull it off? He was managing Repubican Jesse Kelly's campaign when Team Kelly did the same thing to former state lawmaker Jonathan Paton in 2010.

It all depends on whether Kwasman can credibly get his message out. In this race, Tobin will likely raise a lot more money than Kwasman and the sprawling CD1—which reaches from Oro Valley all the way up to the Grand Canyon and beyond—is a much larger territory to blanket with propaganda.

Tobin can likely count on the support of the National Republican Congressional Committee, given that he's got a good relationship with Daniel Scarpinato, who served as Tobin's press guy before moving on to the NRCC. (And don't forget: Scarpinato was Paton's spokesman back when Kwasman and Kelly were trashing Paton, so there's not a lot of love lost there.)

While the NRCC support helps Tobin raise money, it cements his reputation as the establishment candidate—and we know that there's nothing conservative Republicans love more these days than tearing down institutions.

There's a third candidate in the race: Rancher and oilman Gary Kiehne, who is making his first run for public office.

Claytoon of the Day: Diary Of A Wimpy President

U.S. Rep. Tom O’Halleran: “Ending This Shutdown Must Be a Priority”

Claytoon of the Day: Shutdown Sufferers 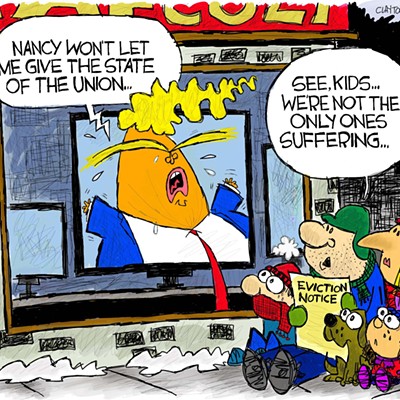