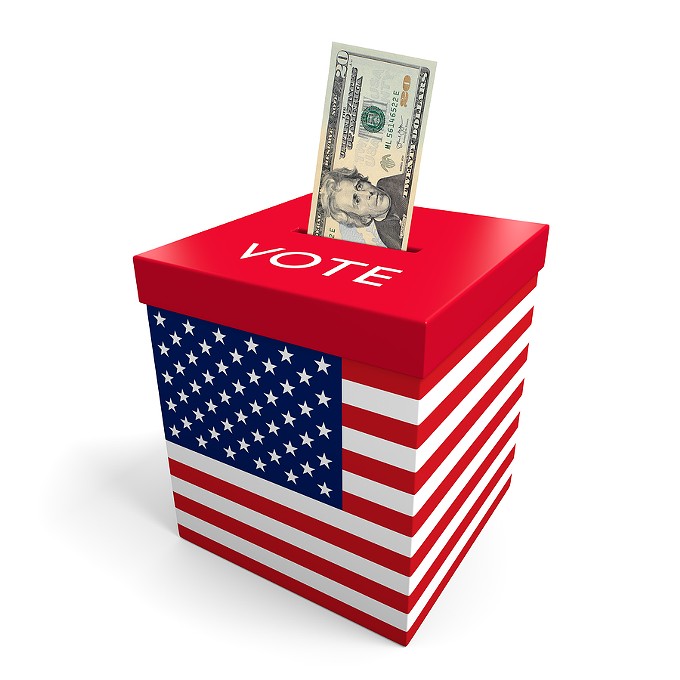 Who's got the dough among the half-dozen candidates in the race to replace retiring Pima County Supervisor Ally Miller?

The race to replace the retiring Republican Ally Miller on the Pima County Board of Supervisors has drawn a half-dozen candidates: four Republicans and two Democrats.

In the money race, Piña is way out in front of the others. She's raised more than $67,000 from contributors and has loaned the campaign another $20,000, giving her more than $87,000 in total. She ended the fundraising quarter on March 31 with more than $73,500 in the bank. Beard raised about $16,200 (including about $2,500 he had loaned his campaign) and still had nearly $10,000 in the bank. Spain raised just $8,388 (including about $1,300 he loaned the campaign) and had about $6,500 in the bank. And coming in last was Williams, who raised roughly $6,350 (including about $4K he brought in from a previous campaign) and had $885 left in the bank. When Williams ran for the Board of Supes in 2012 (losing the primary to Miller), he likewise didn't raise too much money from contributors, collecting less than $6,400 in contributions but dropping about $95,000 of his own money on the campaign, according to campaign finance reports on record with the county.

District 1, which includes Oro Valley, Marana, Casas Adobes and the Catalina Foothills areas, leans Republican. But an underdog status hasn't prevented two Democrats from climbing into the Democratic primary ring: retired school administrator Rex Scott, who has campaign experience on both sides of the aisle, and Brian Radford, a political newcomer who previously worked in corrections.

Scott says the distance between Republicans and Democrats has closed in recent years. The district is now home to roughly 53,000 Republicans, roughly 50,000 Democrats and roughly 38,000 independents. Scott believes that with the name recognition he developed on the northwest side as a principal at Tortolita Middle School and an assistant principal at Ironwood Ridge High School, he has a decent shot at capturing enough independents and crossover Republicans that he can turn the district blue.

So far, Scott has outraised most of the Republican candidates. He's brought in $30,323 without digging into his own pocket and had nearly $17,000 in the bank at the end of March. By comparison, Radford is off to a slow start. He'd raised $65, including $40 from himself and a single $20 contribution.

As you undoubtedly heard, McSally told CNN political reporter Manu Raju that he was a liberal hack for daring to ask her whether she thought the Senate should consider new evidence in President Donald Trump's impeachment trial. McSally knew the question was coming, so she cooked up the "liberal hack" burn and, within hours, launched a fundraising effort alongside Team Trump.

But you know who else took the opportunity to fundraise? Her Democratic challenger, Mark Kelly. And the retired NASA astronaut clobbered her in fundraising in the days after the comment. As Yvonne Wingett Sanders of the Arizona Republic reported last week, McSally raised $281,000 in the days after the comment, but Kelly outdid her by raising $547,000. Maybe next time, you should just run around the parking lot to avoid Manu, Martha.

BTW: We mentioned in last week's column that McSally was dodging questions about Trump's handling of the pandemic by deflecting blame to China. There's no doubt that the Chinese government wasn't straight with the world about the COVID-19 outbreak, but Trump has spouted his share of misinformation and nonsense. (Don't drink bleach, folks.)

Now we know the China deflection is part of a unified Republican strategy, thanks to a National Republican Senatorial Committee memo that leaked to Politico last week. The 57-page memo, prepared by the political consulting firm of Brett O'Donnell, told candidates that instead of defending Trump, they should pivot to attacking China. As Politico reported: "The document urges candidates to stay relentlessly on message against the country when responding to any questions about the virus. When asked whether the spread of the coronavirus is Trump's fault, candidates are advised to respond by pivoting to China. 'Don't defend Trump, other than the China Travel Ban — attack China,' the memo states."

We'll say this for McSally: She sure can deliver her script.

Left at the Finish Line

We've lost a couple of congressional candidates since last week's Skinny column. In Congressional District 2, Shay Stautz decided to quit rather than defend his nominating petitions in court.

Over in Congressional District 1, Doyel Shamley likewise decided to drop out of the GOP primary rather than defend his petitions. ■

More »
More The Skinny
All News & Opinion
Comments (2)
Add a comment
Subscribe to this thread:
By Email