Sen. Martha McSally continues to look like a stooge for the president 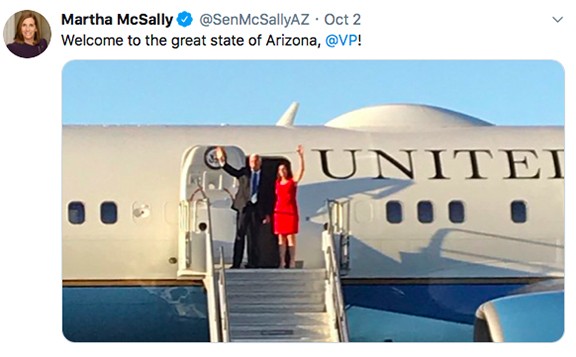 Courtesy photo
Republican Martha McSally creates an image for Democrat Mark Kelly to use in his campaign to oust her from the U.S. Senate.
Trump's Taint

Sen. Martha McSally continues to look like a stooge for the president

Could Sen. Martha McSally have picked a worse week to stand right next to Vice President Mike Pence as she works to win over the voters who rejected her just a year ago?

Team McSally, you may recall, concluded she was the first Republican to lose one of Arizona's U.S. Senate seats to a Democrat for the first time in three decades (for the first time since 1998) for a variety of reasons, including that she buddied up to Trump too much.

Last week, while in Arizona during the Senate recess, she appeared next to Pence just as impeachment talk was coming to a head over President Donald Trump's Ukraine shakedown—and just as the news was coming out about Pence's role in the scandal. Pence, as you'd expect, kept up the party line in his comments to reporters: "The American people have the right to know if the vice president of the United States or his family profited from his position as vice president during the last administration."

Hey, if that's the case, you might want to look into how your broad-shouldered idol is monetizing the White House these days, Mike.

The Veep has claimed to be out of the loop on the whole racket Trump was running on Ukraine, but it's pretty hard to buy he's that dumb. As former Bush speechwriter and die-hard Never Trumper David Frum put it last week: "Indeed, Pence seems to have been involved up to the eyeballs in the Ukraine plot. His team's messaging—Yes, he pressed the Ukrainians to investigate corruption, but he never appreciated that Trump's true purpose was to pursue the Bidens—fails the laugh test."

McSally has stayed mum on the Ukraine scandal. Her press team didn't respond to a question from The Skinny about her reaction to the allegations now swirling about Trump that he withheld foreign aid to force Ukraine to gin up dirt on political rival Joe Biden. Her Twitter feed has been busy presenting the image of a senator who is trying to Get Things Done with various do-good groups around the state. And when reporters asked her about it, she sidestepped the question altogether and accused Democrats of acting in a partisan fashion.

It just goes to show that McSally must continue her role as Trump's stooge, especially since she has a Republican challenger who is trying to out-MAGA her. Make-up mogul Daniel McCarthy probably isn't a big threat to McSally (especially since she has the support of Trump), but it makes it a lot harder for her to challenge Trump's great and unmatched wisdom.

And that makes it all the harder for McSally to win over independents or moderate Republicans who dislike Trump and are leaning in the direction of former astronaut Mark Kelly, the Democrat who hopes to take out McSally next year. Sure, the election is still a year out and 2016 delivered plenty of political surprises, but the polling so far favors Kelly.

We recall another race where a challenger crowed about outraising an incumbent and claimed it was a harbinger of her coming win over an incumbent. That candidate was Martha McSally—and she was right, as she'd go on to knock Democrat Ron Barber out of his congressional seat here in Southern Arizona, by a mere 167 votes in 2014.

If history is any guide, McSally is in deep, deep trouble as she seeks to avoid being the first Republican to lose two races for U.S. Senate in two years.

Romero picks up the endorsement of Tucson's last Republican mayor

A few weeks back, we speculated that independent mayoral candidate Ed Ackerley would try to follow the path of Republican Bob Walkup by trying to grab Republicans, independents and some unhappy Democrats.

Well, with early voting starting this week, that path to victory just narrowed after Romero showed that she can win over Republicans to her side—including the man who pioneered the strategy that Ackerley is embracing.

Walkup, the last Republican who could win more than one election in the city of Tucson, endorsed Romero last week.

"Regina has always shown great leadership and a strong ability to work with everyone—regardless of political affiliation—for the betterment of Tucson," Walkup said in a prepared statement. "Through her 12 years on the City Council, Regina has seen it all. Having gone through one of the worst economic crises of our time, and having worked hard to bring the City back to strength, Regina knows what it will take to continue moving Tucson forward. She understands that our city is at its best when every Tucsonan has a chance to earn better jobs and higher wages. I know she will work well with public and private sector leaders across Arizona, our nation, and beyond to create even greater opportunities for Tucson."

Sure, Walkup's seal of approval isn't going to win over the Wake Up crew, but the endorsement will help Romero dispel accusations that she's a wild-eyed radical prepared to bring Tucson's biz community to its knees.