Unbalanced Approach and The New Frogs 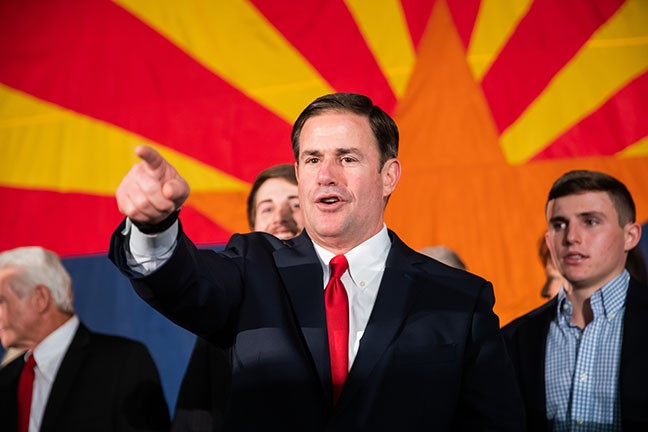 Courtesy
Gov. Doug Ducey will make sure things are fine, at least until he’s out of office.

Gov. Doug Ducey and GOP leaders have finally come up with an $11.2 billion budget plan for the state—a mostly terrible budget plan, but a budget plan nonetheless.

We'll see in the next few days whether GOP holdouts will sign onto it. Lawmakers have a pretty good incentive to push this through quickly—school is about to let out for the summer and the last thing they want is a bunch of red-clad teachers showing up at the Capitol and pointing out that education funding in the state still sucks.

The budget plan has several time bombs designed to explode after Ducey wraps up his second term. For example:

• The plan repeals a $32 fee on auto registration that has become a huge flashpoint at the Capitol. The fee was created last year to fund the Department of Public Safety. DPS funding used to come from the general fund, until a financial crunch forced state lawmakers to start taking money from the Highway User Revenue Funds, or HURF, which comes from gas taxes and auto registration fees. By diverting those dollars, lawmakers had less to dish out for road repair around the state.

So last year, Ducey convinced lawmakers to let him set up a special fee to fund DPS so the state would have more money for roads. But when the fee was announced at $32 instead of the expected $18 annually, lawmakers lost their shit and decided to repeal it altogether. Under this budget, the fee will slowly drop until it's gone in 2024—conveniently, after Ducey leaves office. Hey, there's plenty of money for roads, right? As long as you don't pay attention to that 2015 Auditor General report study that projects a $62 billion transportation budget shortfall between now and 2035. (To be fair, the proposed budget does include $130 million for widening I-17 and another $77 million in other transportation projects.)

• The plan does not pay off a roughly $920 million "rollover" in education funding. What's a rollover, you ask? It's a smoke-and-mirror budgeting trick where you just push a payment that should have been made in the current fiscal year to the next fiscal year. Sure, schools have to figure out how to stretch those dollars to make it work, but that's their problem. State budget is balanced! Anyway, given that the state has money right now, lawmakers could resolve that accounting trick so that someone won't have to do it down the road, but they are just paying off $30 million—in 2022.

• There's a massive $320 million income-tax cut in there, because, why not?

Pima county supervisor Ally Miller sure does have a hard time keeping good help around.

The two new frogs who are stepping up to give Her Royal Scorpionship a ride across the river are Tyler Mott and Bill Beard.

Mott cut his teeth in politics while working on the unsuccessful congressional campaign of Randy Graf, back when Graf was trying to unseat Jim Kolbe in 2004. Mott took a run at the Arizona Senate back in 2012, only to lose to Democrat Steve Farley. He's now earning $38.46 an hour working for government, which comes out to $80,000 a year if Mott is working full time. It appears Mott has finally realized that all that anti-government, free-market stuff sounds good on the campaign trail, but getting that tasty government cheese in your pocket is the real trick when you're a political junkie.

You might remember Beard from a failed run at Pima County Recorder or from his stint as chair of the Pima County Republican Party. We hope his filmmaking game is strong, as Beard—who is earning $30 an hour, or $62,400 a year if he's working full time—now has the important job of running a videocam at the Board of Supervisor meetings. After all, that's what constituents want: a District 1 YouTube page loaded with videos that rarely get more than a few dozen views. That's way better than constituent service!

Beard replaces Sandy Russell, who finally had enough of the District 1 gig and found a job elsewhere in Pima County. We're told by our spies within the county that when Russell gave her two week's notice, Miller just fired her on the spot, so county officials had to scramble so as to not screw up Russell's ongoing employment (and related benefits) with the county.

But that's Miller: a terrible boss to work for, as Mott and Beard may have already discovered in their short time aboard the District 1 crazy train. (From what we hear, there's already plenty of tension between Mott and Lori Hunnicutt, Miller's special staff assistant/fixer who sometimes moonlights as county correspondent for the online ADI, aka the Ally Defense Initiative.)

And if the new guys haven't yet discovered what a nightmare they have signed up for, they will—just like previous employees who have spent time being barked at by Miller.

More »
More The Skinny »
All News & Opinion »
Comments (5)
Add a comment
Subscribe to this thread:
By Email