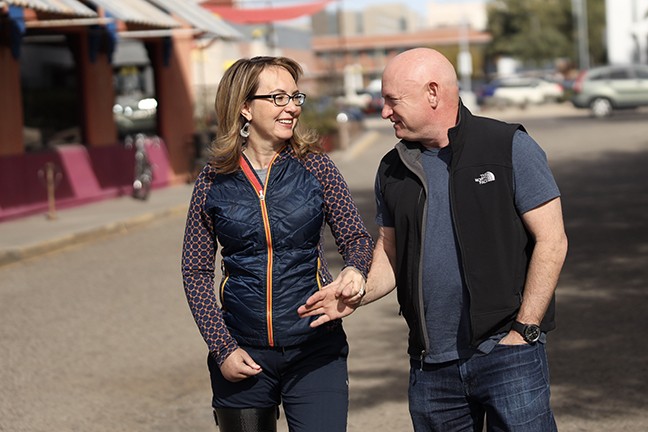 Former navy fighter pilot and retired astronaut Mark Kelly confirmed the rumors this week: He's running for U.S. Senate against Republican Martha McSally, who was appointed to her seat after being the first Republican to lose a Senate race in Arizona in three decades.

Kelly had a 25-year career in the U.S. Navy, but was drawn into politics when he married Gabby Giffords, whose own congressional career came to an end after surviving an assassination attempt during a Congress on Your Corner event in January 2011 that claimed the lives of six people.

After the 2012 mass shooting at Sandy Hook Elementary School in Newtown, Connecticut, Kelly and Giffords established Americans for Responsible Solutions to lobby for new laws to prevent gun violence. The organization changed its name to Giffords last year.

In an announcement speech on YouTube, Kelly credited Gabby for showing him how government could improve people's lives.

Kelly's entry into the race is McSally's worst nightmare. She's already lost one Senate race and only has her seat because she cooked up an insurance plan with Jon Kyl and Gov. Doug Ducey. Kyl, who took a break from his lobbying career to accept an appointment to the late Sen. John McCain's seat, stepped down at the end of last year so McSally could have a consolation prize after falling to Democrat Kyrsten Sinema.

Team Kelly knows McSally inside and out. Many of his most trusted advisors are veterans of campaigns run by Giffords and Ron Barber, the former congressman who won the seat Giffords gave up in 2012 to focus on her recovery. Barber narrowly won a race against McSally in 2012 and lost one to her by a mere 167 votes in 2014.

McSally lost her Senate race because she went from Trump skeptic to Trump true believer in 2018. She hasn't veered from that course, remaining a loyal foot soldier to Trump from her Senate perch. For example, while a handful of Republicans (including newly elected Utah Sen. Mitt Romney) voted alongside Democrats to end the government shutdown last month, McSally remained a team player, voting only for the GOP plan.

At this point, it's gonna be hard for McSally to break up with Trump, who will remain at the top of the ticket in 2020. But even if she remains his loyal handmaiden, she's still got problems with the Arizona Republican Party, which is now under the control of one of her political rivals, Kelli Ward, who lost to McSally in the 2018 GOP primary for Senate. And despite McSally's allegiance to Trump, it's entirely possible that she'll have a primary challenge because many conservative Republicans still think she's too lib.

Kelly does have to make it through a Democratic primary, though he's the first one to announce a 2020 campaign. Sinema's win had a lot of Democrats thinking about running in 2020. One dropped out last week: Newly minted Democrat Grant Woods, who served two terms as Arizona's attorney general as a Republican in the 1990s. Woods, a close ally of John McCain who supported Sinema in 2018, has been dismayed by the direction of the GOP. He had hoped to follow Sinema's moderate path to the U.S. Senate, but has been haunted by some of his not-exactly-woke comments he made about women when he hosted a talk-radio show in Phoenix after he left office.

Still considering the race is Congressman Ruben Gallego of Maricopa County, a rising star in the Democratic Party. Gallego is a veteran who would make a formidable candidate in the primary, but might not have the moderate appeal Sinema had in the 2018 general race against McSally.

And then there's the matter of money. McSally knows how to bring in the dollars—so many dollars, in fact, that she can't keep track of it all and is in regular trouble with the Federal Elections Commission. In her Senate race, McSally raised more than $20 million.

But Kelly can match that. He's already has a fundraising base from his work with Giffords and will be considered one of the most competitive candidates in the country.

Stock up on popcorn. This is gonna be a race for the ages.