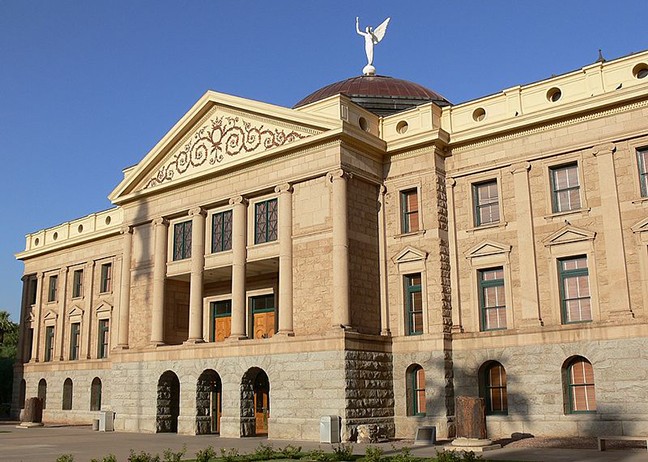 wiki commons
Beware: The Arizona Legislature is back in session.

Arizona's legislative session is in full swing—and as always, that swing goes from the serious work that needs to get done (such as wrapping up Arizona's drought contingency plan in a hurry) to the sideshow attractions, such as the current feeding frenzy focused on Prescott Republican David Stringer, a member of the Arizona House of Representatives already under fire for saying all manner of racist bullshit, who's now reeling from allegations that he faced charges related to sex offenses in the early 1980s.

Stringer does have one media outlet in his corner: The Arizona Daily Independent, the Tucson-based blog that was the brainchild of Lori Hunnicutt (who now works as an aide to Pima County Supervisor Ally Miller but continues her journalism side hustle). One day before the New Times story broke, Hunnicutt wrote a sympathetic story with the spin that Stringer was a victim of a justice system run amok, which is why he's such a proponent of criminal justice reform. Oddly, Stringer told Howie Fischer of Capitol Media Services that he can't discuss the case with anyone, but directed Fischer to the ADI story, which he called an accurate assessment of the case. Stringer assured Fischer he didn't talk to ADI himself, even though—as Fischer noted in his article—Hunnicutt reports that Stringer came to ADI to tell his story because no other media would give him a fair shake. At any rate, Stringer is now facing an ethics hearing amid various calls for his resignation.

Aside from the Stringer mess, there are plenty of bills worth following this session. One of our favorites happens to be SB 1046, which seeks to stop Arizona voters from turning in those vote-by-mail ballots at the polling place on Election Day.

A funny thing happened in the 2018 elections: Democrats won a U.S. Senate seat in Arizona, as well as several other statewide offices: Secretary of State, State Superintendent of Public Instruction and a seat on the Arizona Corporation Commission.

And none of those candidates were winning when the clock struck midnight on Election Day. Instead, all four Democrats came from behind to overtake the GOP candidates as more and more ballots were counted. And there were many, many ballots to count—an estimated 228,000 were dropped off at polling places on Election Day. That's why it took about a week for Democrat Kyrsten Sinema to come out ahead of Republican Martha McSally in the U.S. Senate race, for example.

So it's pretty clear that people who turn in ballots at the last minute tended to lean Democrat in the last election. And it's also pretty clear that Republicans—who have been quite unhappy in recent years to see an uptick in Democratic turnout—are determined to ensure that they disenfranchise those Democratic voters who wait until the last minute to cast a ballot because they don't have their shit together.

Scottsdale Republican Sen. Michelle Ugenti-Rita has introduced SB 1046, which would ban the drop-off of early ballots in person on or before Election Day at polling places or at any other location, such as the county recorder's office. Mail would be the only option. Forget to send in your ballot in time and you'd have to show up and wait in line at your polling place on Election Day.

The problem with this new effort is that hundreds of thousands of voters now believe they can drop off their vote-by-mail ballots on Election Day—and changing the rules will surely mean some of them will be disenfranchised when they try to do it again in 2020. Sure, you can do all sorts of voter-education efforts, but that's going to sail right above the heads of many low-information voters, who are gonna be wildly pissed when they're told their votes aren't going to count in the next presidential election.

This is just the latest effort to hamstring Arizona's current vote-by-mail system, which was first expanded by Republicans back in the early '90s to make it easier to vote. GOP lawmakers have already made it a crime for nearly anyone—whether a political operative or a neighbor—to turn in a ballot other their own to election officials after Democrats got good at gathering ballots and dropping them off in big batches. So it's not surprising to see a big push to tighten the strings once again as they see the power shifting in the state.

SB 1046 passed the Senate Judiciary Committee on a party-line vote last week and slid through the Senate Rules Committee this week, leaving it awaiting a vote of the full Senate.