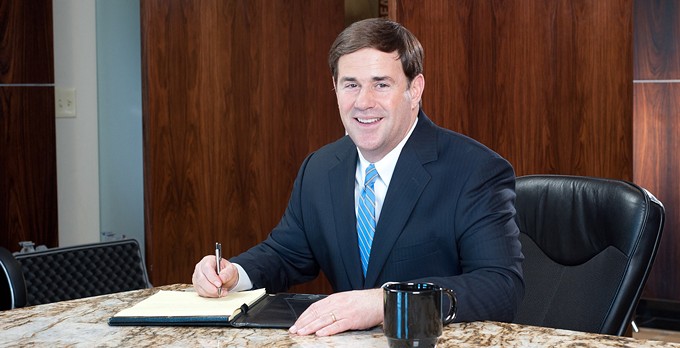 Republicans are outraising Democrats as the 2018 election season gets underway

If you buy the conventional wisdom (and in politics these days, it seems conventional wisdom isn't worth much more than a promise from Mitch McConnell that you'll get some kind of immigration vote), there's a blue wave forming across the country as Democrats prepare to capitalize on President Donald Trump's unpopularity.

But Democrats are obviously quite capable of snatching defeat from the jaws of victory, as we saw just this week in that stupid shutdown circus.

Here in Arizona, Democrats are optimistic that this will be the year that they finally turn things around and win a few statewide races. But Dems are always optimistic that Arizona is turning into a purple state, once the Latinos start voting or the independents get mad about education cuts or the moon is in the seventh house and Jupiter aligns with Mars.

Still, the Resistance has generated a lot of energy for the Dems. But so far, that has not translated into big fundraising hauls for Democrats seeking statewide office. The GOP incumbents have a monetary advantage over Dems, according to recently filed campaign-finance reports that covered activity through the end of 2017. While money isn't everything, the Democrats have had, to be charitable, a hard time winning statewide in recent years, and they aren't going to turn that around without enough money to run a credible campaign to let people know who they are.

Take, for example, the race for governor. Incumbent Republican Doug Ducey had more than $2.6 million dollars in the bank at the start of 2018; meanwhile, his potential Democratic rivals have a whole lot less. State Sen. Steve Farley had $232,000 on hand, out of the $513,000 he had raised. David Garcia, who jumped into politics in 2014 with an unsuccessful campaign for Superintendent of Public Instruction, had raised about $300,000 and had just over $94,000 on hand. (The third Democrat, Southern Arizona YWCA Executive Director Kelly Fryer, entered the race this month, so she didn't have to file a report—but it's a safe bet she's lagging behind her primary opponents.)

It's a similar story in the race for Arizona attorney general. Incumbent Republican Mark Brnovich had raised more than $433,000, and had more than $383,000 on hand. His Democratic opponent, January Contreras (a former assistant attorney general and policy advisor to former governor Janet Napolitano) had about $106,500 of the $177,000 she had raised.

With Congresswoman Martha McSally making her big move to this U.S. Senate race, there's suddenly an open seat in Congressional District 2, which is one of the most competitive in the nation. McSally's long-expected decision to leave the House of Representatives means that Democrats have a new enthusiasm to retaking the seat.

As mentioned above, the conventional wisdom—President Donald Trump's unpopularity and the Democrats' double-digit lead in the generic ballot—presages big wins for Democrats in House races across the country. And CD2 voters choose Hillary Clinton over Donald Trump by 5 percent in 2016, even as McSally cruised to reelection.

Granted, a lot could change between now and November. But the professional forecasters see the district in play. The non-partisan Cook Political Report shifted the race to the "Lean Democrat" column earlier this month, with correspondent David Wasserman saying: "If this were a neutral national environment, this open seat would be a Toss Up. But with President Trump's approval hovering in the 40 percent range, this race moves to the Lean Democratic column." Larry Sabato's Crystal Ball website also says the race leans Democrat, while forecaster Nathan L. Gonzales of Roll Call's Inside Elections puts the race in the "Toss Up" category.

Tucson Hispanic Chamber of Commerce President and CEO Lea Marquez Peterson is the only viable Republican to announce she's seeking the nomination, while a crowded field of Democrats are vying for the seat: Ann Kirkpatrick, the former representative in Congressional District 1 who has relocated to Tucson following her unsuccessful 2016 bid against U.S. Sen. John McCain; former state lawmakers Matt Heinz and Bruce Wheeler; Mary Matiella, a retired former assistant secretary of the Army (in the civilian accounting arm) and Billy Kovacs, a hotel manager.

The televised edition of Zona Politics with Jim Nintzel begins a new season on Friday, Feb. 2. The show can be seen at 6:30 p.m. Fridays on the Creative Tucson network, Cox Channel 20 and Xfinity Channel 74. The TV show repeats Sunday mornings at 9 a.m. and Thursday nights at 6:30 p.m. The radio edition of Zona Politics airs at 5 p.m. Sundays on community radio KXCI, 91.3 FM.

The Skinny: Kirkpatrick Calls It Quits, Won’t Seek Another Term in 2022