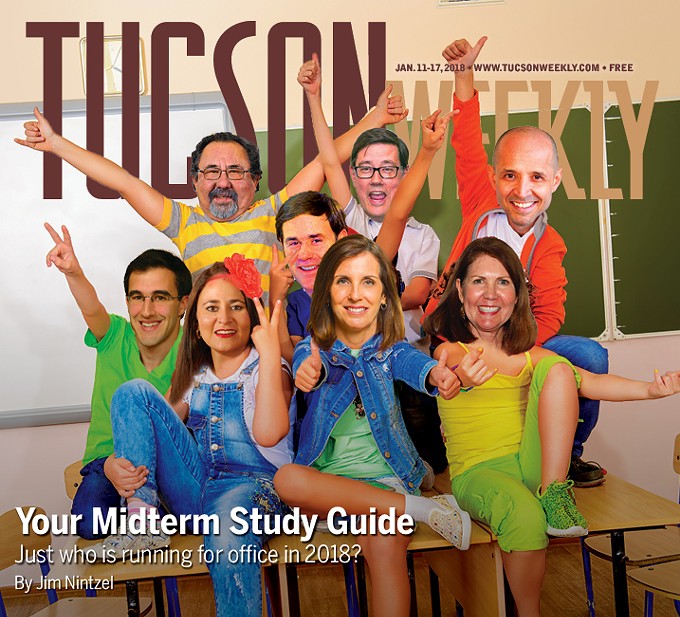 Photo by Louie Armendariz
The popularity contest of 2018 begins soon.

The political landscape of the 2018 midterms

If you think it's hard to get away from politics now, just wait until the TV ads start running for all those midterm elections. To get you ready, here's a preseason primer on what's going on in some of the high-profile races the Weekly will be following this year. Next week, we'll take a look at Southern Arizona legislative campaigns and other races of note.

Last October, Sen. Jeff Flake stunned the political world with a speech on the Senate floor decrying "the personal attacks, the threats against principles, freedoms, and institutions, the flagrant disregard for truth or decency, the reckless provocations, most often for the pettiest and most personal reasons, reasons having nothing whatsoever to do with the fortunes of the people that we have all been elected to serve." And in his broadside against President Donald Trump, he announced he wouldn't be seeking reelection in 2018.

Admittedly, Flake's decision to quit was probably driven by his own collapsing support among members of the Republican Party, but dude had a point when he said: "I have children and grandchildren to answer to, and so, Mr. President, I will not be complicit."

But plenty of others are ready to be as complicit as Trump would like them to be. You've got former state lawmaker Kelli Ward, who chased Flake out of the Senate with her primary challenge to him. Ward is a full-throated Trumpette who tried to take out Sen. John McCain in 2016, but "Chemtrail Kelli" found herself hammered for the wacky things she said and did during her days in the Arizona Legislature, including a call for an investigation into whether the government is secretly poisoning us via chemicals in jet-plane exhaust.

Still, early polling—which is pretty much useless except as a baseline—shows that Ward starts out 2018 as the front-runner in the race for Flake's seat, with somewhere around one-third of Republicans supporting her. That could change fast when Southern Arizona Congresswoman Martha McSally gets into the race. McSally, who represents the competitive Congressional District 2, kept her distance from Trump throughout the 2016 campaign but, after telling her GOP colleagues in the Arizona congressional delegation that she planned to run for Flake's seat, she has started laying on the praise in a manner normally reserved for VP Mike Pence. In a recent prepared statement regarding Trump's overly dramatic delivery of his national security strategy, McSally laid it on thick: "Today we heard what our country has longed to hear from a Commander-in-Chief for the past eight years: a bold, proactive strategy to keep America safe and strong in an increasingly dangerous world." And let's not forget how the American people have longed for a Commander-in-Chief who uses Twitter as the platform for a nuke-measuring contest.

Still, McSally has to play the cards she's been handed. Once upon a time, a former A-10 squadron leader who could raise bucketloads of cash and sounded good on cable news would be a dream come true for Republicans (and indeed, Mitch McConnell has declared McSally one of this top 2018 recruits, even though she's slow-walked her formal announcement), but these days, she may be too normal for GOP primary voters. So it's not that surprising that McSally has decided that she has to go all-in with Trump to win a Republican primary. McSally is expected to announce her campaign this Friday, Jan. 12.

A new wrinkle emerged this week in the form of former Maricopa County Sheriff Joe Arpaio, who told the Washington Examiner he planned to run for the Senate seat as well. Arpaio, who was pardoned last year by Trump after being convicted of contempt of court, has the ability to raise a lot of money and grab a lot of national headlines, but given that he lost his last bid for sheriff, he may not be as beloved by voters as he once was. Plus, Arpaio has a habit of saying he'll run for Governor or Senate and then deciding to wuss out, so don't put too much faith in his "announcement."

The winner of the GOP primary will likely face Democratic Congresswoman Kyrsten Sinema, unless Sinema gets upset in the Democratic primary by political newcomer and Phoenix-based attorney Deedra Aboudd. Sinema has gone from running for the Arizona Legislature as a bleeding heart social worker to a slick Blue Dog Democrat who votes with the Trump agenda half the time, according to the trusty 538.com analysis that political reporters always turn to. Sinema, a crafty political chameleon, hopes her moderate strategy will win over Arizona's independents without alienating her Democratic base.

It remains to be seen if Arizona's other senator, John McCain, will give up his seat later this year as he battles brain cancer, which could both scramble this race and open the door to a whole new set of candidates.

Congressman Tom O'Halleran is seeking a second term in the sprawling district that includes the environs of Oro Valley and Marana as well as Flagstaff, Northern Arizona's Indian country and most of eastern rural Arizona. O'Halleran is a former Republican who lost a primary for his state Senate seat because he was too liberal for his Prescott-area voters. After signing on with the Democratic Party, he easily bested the scandal-ridden Pinal County Sheriff Paul Babeu in 2016. His likely GOP challenger will be Republican Steve Smith, a hardcore conservative and early Trump supporter. Smith could face primary opposition from Shawn Redd, a Native American businessman who barely registered in his 2016 bid for CD1, and/or Kevin Cavanaugh, who ran unsuccessfully for Pinal County Sheriff in 2016.

If Congresswoman Martha McSally isn't running for U.S. Senate, there's quite an odd situation going on in Congressional District 2, as Tucson Hispanic Chamber of Commerce President and CEO Lea Marquez Peterson has already announced she's seeking the office. (It's kind of like that moment in baseball when the runner on first base has passed the runner on second base somewhere around third base.)

So we know that at least Marquez Peterson figures that McSally isn't running in CD2—and she's gone full bore. Earlier this week, Marquez Peterson announced she had raised $215,000 since she entered the race in December.

No other Republican has gotten into the race (which makes sense, given that McSally hasn't quite gotten out of it), but we'll see if Marquez Peterson will have it all to herself. While Pima County Supervisor Ally Miller would have been a formidable challenger, we hear she realized she didn't have the political muscle to pull off a congressional run, so she's staying put. Still, other GOP candidates could yet emerge.

Meanwhile, five Democrats have been positioning themselves to run against McSally: Ann Kirkpatrick, who represented Congressional District 1 from 2012 to 2016, when she stepped down to unsuccessfully challenge McCain statewide; former state lawmaker Matt Heinz, who got clobbered by McSally in 2016; former assistant secretary of the Army Mary Matiella, a political newcomer who has won the endorsement of Congressman Raul Grijalva; former state lawmaker Bruce Wheeler; and Billy Kovacs, a political rookie who has worked at his family's Southern Arizona winery, helped launched the Prep and Pastry restaurant and worked as a operations manager at downtown's Hotel Congress.

Congressional District 2, which includes the Catalina Foothills, central Tucson and Cochise County, is almost evenly split between Republicans and Democrats, making it one of the most competitive districts in the country. It will likely be a major battleground as Democrats attempt to win back Congress.

As he seeks a ninth term, Congressman Raul Grijalva is unlikely to face serious opposition in this heavily Democratic district that includes Tucson's west side, the Tohono O'odham reservation and Yuma. Republicans who are considering challenging him include Edna San Miquel, who ran against Grijalva in 2016 but got kicked off the ballot for technical reasons, and Sergio Arellano, a Republican organizer who now works for Pima County Supervisor Steve Christy.

A governor who prefers tax cuts to education spending and infrastructure investment, Gov. Doug Ducey is trying to rebrand himself as a compassionate conservative as he seeks a second term (hence his promise to boost education spending in this year's State of the State address). Three Democrats want a shot at Ducey: State Sen. Steve Farley of Tucson, a personable policy wonk; David Garcia, an ASU professor, Army veteran and former staffer for the State Department of Education who ran unsuccessfully for State Superintendent of Public Instruction in 2014; and Kelly Fryer, the head of the Southern Arizona YWCA, who just jumped into the race this week.

Republican Attorney General Mark Brnovich is seeking a second term. His Democratic challenger is most likely to be January Contreras, who was director of the Arizona Department of Health Services in the Napolitano administration.

Republican Secretary of State Michele Reagan, who has screwed up multiple election-related tasks during her first term in office, has drawn a primary opponent in the form of state lawmaker and Christian conservative Steve Montenegro. On the Democratic side, state lawmaker Katie Hobbs is up against attorney Mark Gordon.