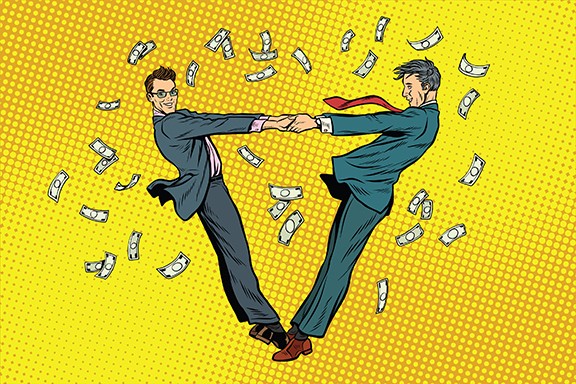 BigStock
It's not about the money, right? They just wanna make the world dance.

After teasing us with calls for a return to regular order, bipartisan cooperation and deficit reduction, Arizona Sens. John McCain and Jeff Flake showed they cared little for such fig leaves when they voted in favor of the absurd tax cuts that passed the Senate last week.

Only one GOP senator showed that he was serious when talking about the dangers of deficit spending: Tennessee's Bob Corker.

The tax bill, which will cost more than a trillion dollars over the next decade, was assembled on the fly—so much so that senators were voting for a bill that actually included hand-written scribbles in the margins. Yes, nothing says serious tax reform more than a bill that's rushed through faster than Breitbart News can pump out a hot take on immigration news. At the end of the day, all the arguments about needing to read a bill before voting on it made no difference: Deficits be damned, the donor class wanted tax cuts for those at the top, so those at the top got tax cuts. And for a few glorious hours, lobbyists got free rein of a pleasure palace designed to fulfill all their deep, dark special interests. All manner of tricky new loopholes were inserted and before anyone knew what was up, the bill passed. We'll be reading about all these provisions for years to come.

There's a lot to unpack in the Senate version of the GOP tax cut plan (and if you want an in-depth analysis, there are plenty of places to find one via The Google). But you can rest assured that there are plenty of ways for savvy business types to game the system.

The bill now heads off to a conference committee, where lawmakers from both chambers will still be restrained by Senate rules that limits just how much deficit spending can be done—and can you imagine how much would have been given away without that limitation? As it is, the Senate bill is full of expiring middle-class tax cuts that most Republicans believe will never be repealed, so the true cost is even higher than $1.5 trillion price tag. And despite what Trump and GOP leaders are telling you, these tax cuts will not pay for themselves. It didn't work with Reagan, it didn't work with George W. and—according to the very people who estimate this stuff for Congress and the vast majority of actual economists—it's not going to work with Trump. Instead, the rich will get richer, the poor will get poorer and the middle class will continue to shrink while the deficit grows. And what do you bet, once the deficit starts to grow, that Republicans will start insisting on cutting Social Security and Medicaid? Just this week, we learned the nation can no longer afford to provide health insurance for poor children. (For details on how the whole "starve the beast" strategy, see my interview with Bruce Bartlett on Page 4.)

Flake tweeted that he came around to "yes" after "securing language to eliminate an $85 billion budget gimmick as well as commitment from the administration & #Senate leadership to advance growth-oriented legislative solution to enact fair & permanent protections for #DACA recipients."

That's swell and all, Jeff, but get real: The loopholes in this bill total a lot higher than $85 billion, so your wonky little maneuver is like bailing out the Titanic with a bucket. And trusting Mitch McConnell and Donald Trump to seriously push to help out undocumented youth is like, well, believing that a $1.5 trillion tax cut will magically pay for itself.

But hey: This is a Republican Party that's already warming up to the idea of welcoming an accused child molester into their ranks so they can continue to expand income inequality, accelerate climate change and generally ruin life for everyone on the planet—half to make a buck and half just out of spite.

We reported last week that Pima County Supervisor Richard Elías was considering a run in Congressional District 2, given that incumbent U.S. Rep. Martha McSally is now eyeing a run for the U.S. Senate seat that Jeff Flake is giving up rather than facing a humiliating loss to Kelli Ward. But we're now told that Elías, after giving it some thought, has decided to stay out of the crowded Democratic primary, which has already drawn former U.S. representative Ann Kirkpatrick, former state lawmakers Matt Heinz and Bruce Wheeler, retired assistant Army secretary Mary Matiella and political newcomer Billy Kovacs.

But we'll be back!

The Skinny is taking the rest of the holiday season off, but we'll be back with more with the Weekly's Jan. 11 edition. See you next year!

More »
More The Skinny
All News & Opinion
Comments (5)
Add a comment
Subscribe to this thread:
By Email