The Skinny: Sick and Twisted 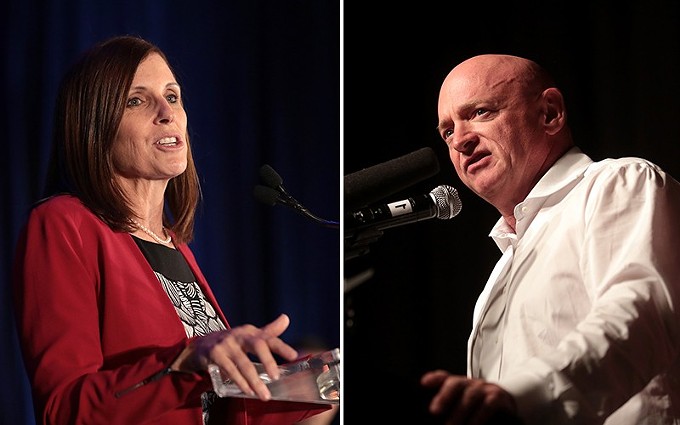 Sen. Martha McSally doesn't appear to have gotten the game-changer she needed in the Oct. 6 debate against Democratic challenger Mark Kelly. We've seen several polls that were taken after the debate and exactly none of them show McSally with a lead.

As she has throughout the campaign, McSally is continuing to lie about her record on health care. She has stuck by her line that she has "always protected people with preexisting conditions, and she always will." And a Team McSally spokesperson laid down one of the biggest whoppers of the campaign this week, when she told the Arizona Republic: "The idea that Obamacare protects people with preexisting conditions is debunked Democrat talking points."

Let's turn the clock back to 2017, when McSally was still serving in the House of Representatives. When the House was debating whether to repeal the Affordable Care Act and replace it with the GOP alternative known as the American Health Care Act, McSally urged her colleagues to pass the bill by telling them: "Let's get this fucking thing done"—a moment she boasted about in ads during her unsuccessful 2018 bid for Senate.

Sure, words like "protect" can have different meanings to different people—but voting to get rid of existing protections for people with preexisting conditions and replacing with a law that lets insurance companies charge them whatever they want doesn't seem like protection to The Skinny.

Meanwhile, it looks like not enough people were willing to skip meals to pay for McSally's TV ads. She reported a third-quarter haul of about $20 million for her campaign, while Kelly reported raising a staggering $38 in Q3. Over the course of the campaign, Kelly has crushed McSally, who had a rep as a mighty fundraiser going into the campaign. Kelly has raised nearly $83 million, compared to McSally's $48 million. Going into the final stretch, McSally had about $12 million in the bank, compared to Kelly's roughly $19 million. And once again, the FEC is crawling down McSally's back because she has "contributions that appear to exceed the limits set forward" in federal statute. This has been a chronic problem for McSally throughout her political career, which suggests that when it comes to raising money, McSally just doesn't care whether she follows the law.

McSally can blow all her remaining cash on telling more lies to Arizonans, but so far, voters aren't believing her falsehoods—and she has less than two weeks to turn things around.

Whether it's because of the pandemic or an eagerness to express their voice, Pima County voters are casting their ballots earlier than ever. Pima County Recorder F. Ann Rodriguez says she has mailed out more than a half-million early ballots and more than 200,000 have already been returned.

Rodriguez has two shifts working to process the rush of ballots, but based on unofficial tracking by Sam Almy of political consulting firm Saguaro Strategies, Democrats have a big lead in early voting in Pima County. Almy's numbers show that of the 91,000 or so ballots that were processed at the time of his analysis, more than 52,000 came from Democrats, roughly 21,500 have come from Republicans and 18,000 have come from independents.

Almy's analysis also shows that Dems are leading statewide when it comes to turning in ballots. Of the roughly 838,000 ballots that he tracked, 370,000 came from Democrats, 276,000 came from Republicans and 192,000 came from Independents.

If you haven't already requested an early ballot, time is running out. The deadline to request one is Friday, Oct. 23. To get your early ballot, visit recorder.pima.gov or call 520-724-4330.

More »
More The Skinny
All News & Opinion
Comments (11)
Add a comment
Subscribe to this thread:
By Email