The Skinny: Out of political spite, Ducey blocks opportunity to get vaccines to low-income and minority neighborhoods 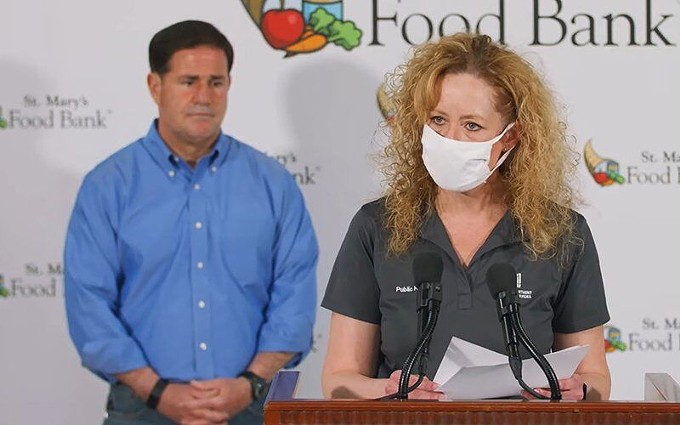 It's been more than a month since FEMA first approached Pima County about opening a clinic to vaccinate people in minority and low-income neighborhoods.

The vax clinic could have been up and running already, but Arizona Health Director Cara "Let Them Eat COVID" Christ and Doug "Drop Dead" Ducey first refused to allow it, leading the media to hammer the governor for his willingness to stand by and let people die in Pima County. Since saying he'd reconsider it, Ducey dragged his heels and finally offered up a contract that neither Pima County nor FEMA was willing to sign because it was full of poison pills.

Pima County officials had argued that the agreement would bring more vaccine to Arizona and be set up in low-income and minority neighborhoods, reaching a segment of the population that has not fared well in Ducey's "Hunger Games" vax strategy.

But those upsides meant nothing to Ducey, who argued that all the vaccine should flow through him because the peasants in Pima County don't matter to the King of the North. Plus, Christ argued that that it was just too complicated to set up a vax clinic, despite the fact that Pima County has been running several large outdoor sites along with mobile clinics.

So Ducey shot-blocked Pima County's potential clinics—and at this point, the state has so much vaccine that hundreds of appointments are going unfilled on a regular basis at Ducey's big UA POD.

In fact, Christ said last week that interest in the max-vax sites like the UA or the stadiums in Phoenix is falling and state health officials now think they need smaller clinics in distressed neighborhoods—which is exactly what Christ and Ducey kept from happening here weeks ago. Well done, governor!

At this point, Pima County officials are giving up on opening the FEMA clinic because vaccine is no longer scarce. Instead, they are hoping for FEMA's help with staffing clinics around town.

Christ and Ducey can stick their contracts where the sun doesn't shine.

The Arizona Supreme Court said last week that state lawmakers overreached when they passed a law requiring Tucson elections to move to presidential and midterm election years if not enough voters turned out to cast ballots.

In a 5-1 decision with Justice Clint Bolick dissenting, the court held that the timing of elections in a charter city such as Tucson was not a matter of statewide concerns, no matter the level of participation.

The 2018 law would have triggered a change in the schedule if turnout in a city election fell by 25% or more from the previous year's gubernatorial election. The Tucson City Council asked voters to amend the charter in 2018, but the proposition was rejected and the City Council does not have the power to override charter provisions without voter approval.

As a result of the ruling, this year's city election will continue as scheduled, with elections in Wards 3, 5 and 6.

State lawmakers already forced smaller towns without protected charter rights to move their elections in sync with the presidential and midterm elections as of 2014. But the Arizona Supreme ruled that law did not apply to Tucson for similar reasons.