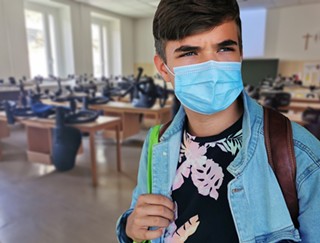 In defending a state law banning mask mandates in schools and universities that was snuck into the budget in the final days of the legislative session, Gov. Doug Ducey made a big deal about following the law. He insisted universities abandon a plan to require vaccinations or weekly COVID tests because it was against the law. He said local school districts shouldn’t enact mask mandates because it was against the law. He offered schools that didn’t enact mask mandates extra money from the state because they were following the law.

So it’s a rich irony that the law that Ducey cherished so much was passed in an unconstitutional fashion, according to a Maricopa County Superior Court judge who tossed the legislation earlier this week.

Judge Katherine Cooper said it was a violation of the Arizona Constitution’s single-subject rule, which says you can’t logroll a bunch of unrelated legislation into a single bill. Cooper’s decision will certainly be appealed, but she made no bones about why the law was unconstitutional.

“The issue here is not what the Legislature decided but how it decided what it did,” Cooper wrote. “The bill is classic logrolling—a medley of special interests cobbled together to force a vote on all or none.”

There were cheers from Democrats, educators and many parents regarding the end—for now—of the mask ban in schools.

For all those who are complaining that masks don’t work, last week’s CDC study that included Arizona schools showed that classrooms without universal masking were 3.5 times more likely to experience a COVID outbreak.

Team Ducey has argued that kids are free to wear masks if they want to, but that ignores the basic science here: The masks collect the droplets that kids cough, sneeze and even breathe out. That means the virus, if a kid happens to have it, has less opportunity to spread. And let’s face it: Parents who don’t want their kids wearing masks are, by and large, the same parents who aren’t taking precautions against COVID, so their families are more likely to come down with it.

Masking is just another mitigation measure that allows classrooms to remain open and limits the COVID spread. We understand that there are many anti-maskers who don’t understand that (or don’t give a crap), but you’d think the governor’s advisors would be smarter than that. Hey, maybe Ducey can check with his new advisor, Dr. Rich Carmona. Our former surgeon general can explain it to you, Doug—not that you’re interested in listening.

Cooper’s decision may be overturned on appeal—but anything that keeps masks on kids in classrooms until the 5-12-year-old set can be vaccinated is a win. Sure, not every parent will vaccinate their kids, but then they will be only risking the health of their own children instead of the ones around them.

We should note that it’s not just the mask mandate that was tossed. There were other laws pushed into the budget, including a ban on teaching critical race theory in schools (the latest distorted boogeyman of the right), some ballot legislation to prevent the Chinese from sending in bamboo ballots, and various other dumb provisions that evidently couldn’t otherwise get enough votes to pass the Arizona Legislature.

Attorney General Mark Brnovich said he would appeal the ruling.

“It’s unfortunate that left-wing groups want to undermine the legislative process and indoctrinate our children with critical race theory and force vaccines on those who don’t want them,” Brnovich said on Twitter.

What’s really unfortunate is that Brnovich isn’t supporting the Arizona Constitution and condemning the logrolling that put all these provisions into the budget. Preventing the budget from becoming the Christmas tree that lawmakers can hang anything on isn’t undermining the legislative process. It’s requiring lawmakers do it the right way. If these policies are so great, they should be able to pass on their own.

Brnovich’s behavior is unfortunate but not surprising. Just last week, he went full anti-vax while speaking in front of a GOP crowd. As first reported by Dennis Welch of 3TV/CBS5, Brno asked the crowd: “If you can get COVID after you’ve had the vaccine and you can still spread it, then what’s the point of the vaccine?”

Perhaps Brno is too busy using his office to position himself to run for U.S. Senate to pay attention to the COVID outbreak, but roughly 90% of the people hospitalized and dying from COVID are unvaccinated. The Skinny would say having a mild case of COVID is better than dying from it, but maybe we just don’t understand the price of freedom.

It’s hardly the first time Brno has worked to undermine public health. He was among the GOP AGs who led a very flimsy suit all the way to the Supreme Court to throw out the Affordable Care Act, but even the current conservative justices ruled against him. If he’d had his way, millions of people would have lost their health insurance and suffered the
consequences.

All in all, it’s increasingly obvious that voting Republican is bad for your health.

The Skinny: Hulking Out: Does Ducey have a rage monster inside of him?