The Scotsmen Are Coming 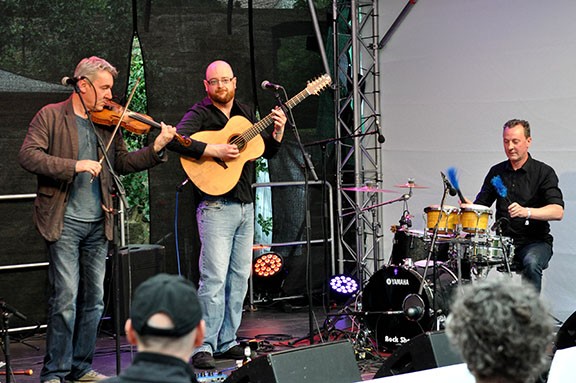 Courtesy photo, Wikicommons
Old blind Dogs (SCO)appearance at the 2016 blacksheep festival at Bonfeld castle, Bad Rappenau, Dorweiler, Baden-Wuerttemberg, Germany
The Scottish band Old Blind Dogs returns to Tucson this Saturday just a year-and-a-half after their last Old Pueblo gig. That's how much their fans like them.

The boisterous Dogs, as their devoted followers call them, will open up Tucson's Celtic season with a host of traditional Scottish songs and instrumental tunes. They'll also mix up the old music with the new tunes that rev up the tradition.

Known for first-rate fiddling and piping, the Montreal Gazette calls the band "a Scots neo-traditional super group, with a bracingly modern musical attack."

Fiddler and singer Jonny Hardie co-founded the band in Aberdeen in the northern reaches of Scotland way back in the early 1990s. Still going strong after almost 30 years, the band still features Hardie, the only original member left. In addition to musical skills that have had him fiddling with The Chieftains and other greats, Hardie also has the gift of gab: he's been known to tell tall tales on stage. (He's also worked as an actor.)

The three other musicians in the current lineup, all of them in demand with other bands, include piper, whistler and singer Ali Hutton, who first picked up the pipes at age 7, and percussionist Donald Hayes, both of them Scotsmen.

Last week, the morning after the Dogs played a gala pan-Celtic concert in Aberdeen, the Tucson Weekly caught up by email with member Aaron Jones, who joined in 2003. Jones was born not in Scotland but in England, to a musical Northern Irish immigrant family. With a beautiful voice and mastery of the bouzouki, cittern and guitar, he early on proved his Scottish chops with Old Blind Dogs. Two years after he joined, he won Outstanding Instrumentalist of the Year at the Scots Trad Music Awards.

Here's an interview with Jones, edited for space and clarity.

How did the show go last night?

It was great. It was part of Aberdeen's Northern Arc concert series, which brings together artists from the fellow Celtic nations. We performed a double bill with Breton band Startijenn (from Brittany, the Celtic region of France). It was a great opportunity to play with the boys.

Aberdeen is like a home show for Old Blind Dogs, so it was a great night. The band formed there in 1992. We have a very loyal fan base there so always a good turnout. Lots of dancing and singing along, which always makes our job much easier.

Aberdeen is known as the granite city. There's a lot of wealth there as the Scottish oil industry in the North Sea is based out of Aberdeen. The surrounding area is very agricultural with large farming communities. Lots of flowing fields of crops at this time of year and bales of hay.

In a few days, you'll be in Arizona, where we're still sweltering in 100 degrees. It's got to be cooler in Scotland.

The weather here at this minute is very changeable. Torrential rain one moment and blue skies the next. Autumn is approaching rapidly so it doesn't get much above 70 degrees even on the sunny days.

Lucky you! Are the tunes and songs you performed in Aberdeen what we'll hear in torrid Tucson?

Absolutely. The show is a good mix of our tunes and songs, fast and slow. There's a healthy amount of stuff from the new CD, Room with a View, and a few old songs for the folks who've followed the band for years. There are also usually a few new pieces that we are working on.

You mix up old traditional works whose authors are unknown with newer pieces by composers working today.

Your bandmate Ali Hutton wrote a new tune on the album, "Cairo Day." Have the other Dogs written music?

None of the band writes songs but over the years we've all contributed tunes and melodies to our repertoire. Jonny and Ali, the melody players, have been the most prolific.

You were born in England to Northern Ireland immigrant parents. It's a musical family, right?

Yes, everyone plays something or sings. We didn't have a TV until my teens and there were lots of instruments around the house. It was inevitable that our curiosity would see us learn an instrument at some point.

After a childhood steeped in Irish music, you now play Scottish music in an acclaimed Scottish band. Is there a difference between Irish and Scottish trad music?

There are subtle differences between the actual music itself. The Scots have their strathspeys (slow reels) and marches and the Irish have their slides (rhythmic jigs) and polkas. Otherwise, the cultures are very similar and the approach by the musicians—which has become markedly more professional over the years—is very similar. The music scene in both countries is in good health just now. A vibrant, active scene engages people of all ages. It's a very good time for traditional music in Ireland and Scotland.