See Jim Nintzel escape conviction every Friday at 6:30 p.m. during the "Reporters' Roundtable" segment of KUAT-TV's Arizona Illustrated on Channel 6.

The Verdict: Guilty! Sort Of

After five days of deliberation, a Pima County jury convicted Dr. Bradley Schwartz on charges that he conspired to kill his former employee, Dr. Brian Stidham. But they failed to reach a verdict on a first-degree murder charge, because they couldn't agree on whether Schwartz actually went through with hiring accused hit man Ronald Bruce Bigger to carry out the crime, with some jurors evidently concluding Schwartz had nothing to do with Stidham actually being stabbed and beaten to death in October 2004. Now that's what we call a wild coincidence!

The conspiracy conviction, which is expected to be appealed by Schwartz's court-appointed attorney, Brick Storts, carries a penalty of 25 years to life.

Pinal County prosecutors, who had to handle the case because Schwartz had so many ties inside Pima County Attorney Barbara LaWall's office, are expected to decide later this month whether to retry Schwartz on the murder charges.

Bigger is scheduled to stand trial later this year.

How lucky are Tucson drivers? As of last week, we were the only ones in the state not paying, on average, more than $3 a gallon, according to AAA Arizona.

Tucson prices averaged $2.949 per gallon of regular unleaded gas as of May 4, while the state average was $3.055, which is up 60 cents from one month ago. AAA officials expect the price to keep climbing through Memorial Day.

Meanwhile, The Associated Press reported earlier this week that Iran officials are warning that oil prices, now about $70 a barrel, could climb to $120 a barrel. But we're sure the Bush administration will invade before they let that happen.

In other auto news: The Range spent Saturday attending traffic school for a speeding ticket recently acquired on Campbell Avenue near University Medical Center, as reported last week. Thanks to our friendly instructor, Mario Castro, we learned that: (a) we should be more careful while driving, (b) Disney cartoons aren't nearly as sophisticated as the work done by the Warner Bros. crew who did Looney Tunes; and (c) we're really glad the Arizona Legislature has shortened the amount of time we'll have to spend in class next time we get busted.

A host of big-time movie stars, including Ron Perlman, Steven Weber and Charles Durning, got the red-carpet treatment when they turned out at downtown's Fox Theatre for the world premiere of Desperation, an upcoming ABC special event based on another one of those riveting Stephen King best-sellers. The film, which was one part The Shining, one part Evil Dead 2 and one part The 700 Club, was filmed in Tucson and Bisbee. Mayor Bob Walkup thanked producer Mark Sennet and director Mick Garris for boosting the local economy and helping with the renovation of the Tucson Convention Center, which became necessary after the filmmakers set the facility on fire during the shoot.

The Hollywood gang, in turn, encouraged elected officials in the audience to provide them with tax breaks and a soundstage to bring more movie magic to Arizona.

Upcoming at the Fox, which looks just stunning following its rehab: Inherit the Wind this Friday, May 12, and Lawrence of Arabia next Saturday, May 20. A summer classics series kicks off with Gone With the Wind on June 1.

Warren Steed Jeffs, the fugitive leader of the wacky 10,000-member religious sect known as the Fundamentalist Latter Day Saints, which has been festering for years on the Arizona/Utah border, made the FBI's 10 Most Wanted List, joining such notorious outlaws as Osama bin Laden.

Mexican President Vicente Fox refused to sign legislation decriminalizing possession of small amounts of marijuana, cocaine, heroin and other drugs. The proposed law, which had been passed by the Mexican government, had come under criticism from U.S. authorities and the Arizona Daily Star editorial page, which suggested without a trace of irony that Mexico might not be a serious partner in the War on Drugs. 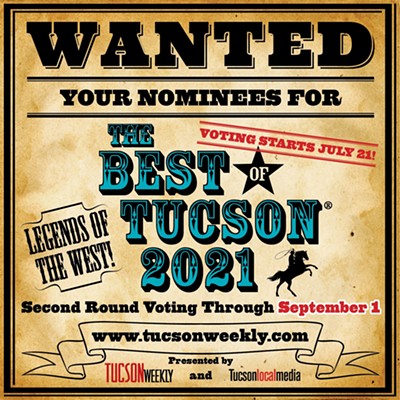