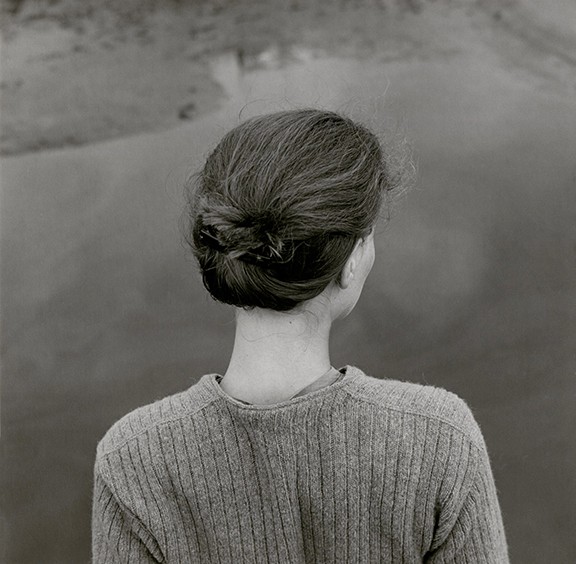 From the Archive: Masters of 20th Century American Photography

The single most beautiful photo in Masters of 20th Century American Photography, says Terry Etherton, is a 1967 Emmet Gowin portrait of his wife, Edith.

Edith is looking out into the distance on Chincoteague Island in Virginia. But Gowin photographed her from behind, so we see only her shoulders, the back of her head, the curve of her neck and a glimpse of her cheek.

Her hair, gathered into a bun, is the darkest element in a photo that's a symphony of grays in every shade. Edith is in sharp focus, but the dreamy waters and spits of land she's gazing at are softly pictured in a multitude of tones.

The work is a beauty, one of many in a show of nearly 80 photos drawn from Etherton Gallery's own archives, most of them shot by famed photographers. Hanging in the Axial Gallery, a hallway space that acts as a prelude to the larger gallery and exhibition, the lovely Gowin piece is in excellent company. The star-studded Axial has three Edward Westons, an Ansel Adams, a Harry Callahan, a W. Eugene Smith, a Frederick Sommer and more.

The Westons are spectacular. Made in the late 1920s and '30s, each focuses on the shapes and shadows of an object writ large—or a body writ small—and placed against inky black.

The seashells in "Two Shells (14S)," 1927, glisten and curve sensuously like a human body, and so does the pepper in "Pepper (30P)," 1930, from a famous Weston series. In the mesmerizing "Nude" from 1936 a seated woman poses with her head down and her arms wrapped around a knee. It's a delight to see these three images together, all of them homages to the beauty—and similarity—of organic natural forms.

Nearby is one of the few color works in this overwhelmingly black-and-white show, "Sharbat Gula, Afghan Girl," probably the best-remembered photo ever published by National Geographic. Photographed by Steve McCurry for the magazine in 1984, the girl has startling blue-green eyes, and she aims them right back at the photographer in a piercing gaze.

Inside the big gallery there are plenty more famous names. The show focuses mainly on the years after World War II, when Harry Callahan was refining his simple-but-gorgeous shots of black trees etched against white skies in snowbound Chicago in the '40s and '50s and Garry Winogrand was perfecting street photography in '60s and '70s New York—he's represented here by shots of a peace demonstration in Central Park and a surprisingly moving picture of a hippo and a man at the Bronx Zoo locked in an eye embrace.

In the 1970s, Richard Misrach pioneered the split-toned technique that delivered barely-there color to his gelatin silver prints. In one, a desert boojum plant rises up to a dark sky tinted an elusive purple; in another, a shot of a palm tree, traces of gold glow in the distance. But the split tone technique is already lost to changing technology; it was made possible by the unusual chemical combo in a type of paper that's no longer manufactured.

Several photographers recorded life in teeming post-war cities. Max Yavno's "Muscle Beach, Los Angeles," 1949, is a humorous look at wall-to-wall people in swimsuits, facing a wall-to-wall block of seaside stores. Bruce Davidson's "Stickball, Brooklyn, NYC," 1959, is a classic view of kids playing between cars on a street; it's shot from on high, presumably from a fire escape or the roof of nearby walk-up building.

Bill Owens went the opposite direction in his Suburbia series, examining the post-war sprawl that brought Americans away from cities by the millions. Half critical, half empathetic, the 1972 Owens work here pictures a couple out back on their patio; the husband, in a white chef's hat, is barbecuing steaks, a new ritual in a new way of life. Henry Wessel's "Tucson, Arizona," 1974, examines our own city, a place that's sometimes urban and suburban at the same time. Wessel shot a typical Tucson bungalow, bleached by the sun and disappearing behind weeds run amok.

Socially-conscious photographers Danny Lyon and Alex Webb are both still working well into the 21st century. They deviate on both style and topics, but coalesce on the issue of immigration. Webb's now-familiar "San Ysidro, California" is a lyrical, wrenching color image of the arrest of two migrants in a luscious green field filled with yellow flowers. The picture was shot long ago, in 1979, and the clothing of both migrants and officers are from another time; what's striking is that the event Webb pictures is still happening today, though more relentlessly and more cruelly.

Lyon, famed for his civil rights images and photos of hell-hole Texas prisons, is aligned with Webb here in a jaunting photo of defiant migrant farmworkers on strike in "Maricopa County," 1977.

It's no surprise that in this era of big-name male photographers, men were producing many pictures of women—you can see Edith Gowin's face in another portrait made by her husband—but talented women were also making great works. Diane Arbus, Judy Dater, Imogen Cunningham, Barbara Moran and Annie Leibovitz all have interesting work in the show.

Ruth Bernhard, known for striking female nudes, is represented by two 1960s works, "Sand Dune" and "Two Forms." Both are spare and alluring, with deep blacks alternating with bright lights.

Linda Connor, a highly regarded photographer who travels the world, has a majestic 1992 view of the interior of the Hagia Sophia in Istanbul. Another work, from 1978, is a quiet scene in a Massachusetts wood. Cunningham's 1922 dual portrait of lovers Margaret (or Margrethe) Mather and Weston is also a portrait of two artists: Mather herself what an acclaimed photographer of near-abstractions.

New to me is the wonderful Marion Post Wolcott, who documented rural poverty as a photographer for the Depression-era Farm Security Administration. Her 1939 photo, "A Member of the Wilkins Family Marking Biscuits for Corn Husking Day, Tallyho, N.C.," is a beautifully composed kitchen scene. A woman bathed in light leans over a counter rolling out the biscuit dough; pots and bowls neatly line shelves nailed to the wood frame walls. It could be a Vermeer in black and white.

It's a work that's lovely and true, a compassionate portrait of a woman, by a woman, doing the work that never ends.