When Jesuit missionary Eusebio Francisco Kino visited the Akimel O'odham village of Tumacacori in January 1691, he did little more than celebrate Mass and promise the natives lasting salvation.

But since he arrived there a day before he did the same in nearby Guevavi, technically, the Mission Tumacacori is the oldest, if not the most famous and most visited, Spanish Colonial mission in Arizona.

Last year, some 45,000 visitors walked the shady grounds of Mission Tumacacori. That's a far cry from the approximately 200,000 that flocked to San Xavier del Bac, its more famous and prettier sister to the north. The experience at Tumacacori is very different from the still-living traditions available at San Xavier--it's as much about experiencing a long-lost landscape as it is about seeing a crumbling church ruin.

For many years, the church was an adobe hovel on the east side of the Santa Cruz River, which back in those days flowed seasonally and gave the O'odham their lives. While the same river flows north from Mexico today past the same land, now it has surface water year-round; it's a few inches deep with reclaimed waste water and high levels of E.coli and other bacteria, so much so that you wouldn't want to dip your feet in it.

It wasn't until after the coming of the Franciscans that construction on the church we can all visit today got underway on the west side of the river, in about 1800. Then, the narrow adobe church with the fired-brick bell tower was renamed in honor of St. Joseph, Jesus of Nazareth's stepdad.

In 1908, Teddy Roosevelt--who, more than any other president, saved Arizona from Arizonans--established Tumacacori National Historic Park. That was 100 years ago, an anniversary park officials at Tumacacori, just south of Tubac in the evergreen Santa Cruz Valley, have been celebrating all year with various events and lectures.

In January 2009, just a few short months from now, the park's new $400,000 museum will open to the public. Eight years in the making, the museum--which the Tucson Weekly previewed last week by portable construction-lamp light, since the all-important museum lighting is yet to be installed--is a long leap forward from the somewhat dusty, early-1970s exhibits that used to tell the mission's history.

One of the most striking elements of the new museum is a huge photo of the bajada stretching west from the Santa Rita Mountains that has been digitally cleaned of the many homes that now dot the area, showing visitors what the valley looked like when Kino first saw it. There are also large, digitally illustrated panels featuring photo-realistic scenes of native life along the Santa Cruz circa 1690, which reportedly took the artist two years to complete. The new museum is organized around three intricate wax-figure dioramas made in the 1930s that were part of the old museum but now seem fresh in their sleek new surroundings. And for the first time since 1840, a striking statue of Jesus is on display. A few weeks ago, the statue was returned to Tumacacori by San Xavier del Bac, where it had been kept for more than 150 years.

Beginning early this month, park superintendent Lisa Carrico and her staff will begin a multiyear process to create a new general management plan for the historical park, a document that will govern the park for the next 15 years. The last planning period ended in 1996, so Carrico is getting things going a bit earlier than usual--but she has her reasons.

In 2002, the park expanded by about 310 acres after an act of Congress allowed the purchase of land along the river from two ranchers. Through the planning process, park officials, with the input of the public, will decide how best to use that land.

Carrico said that the process will begin with workshops with planners from Denver and Santa Fe, N.M., and later will be open to public input. The whole process is bound to take at least three to five years. Since the land added in 2002 includes a riparian area with a large mesquite bosque--a dwindling and rare ecosystem, as is the whole of the Santa Cruz Valley and the mountain range that overlooks it--the local Audubon Society has said that it will be watching the process carefully.

One of the issues bound to come up during the process is the relative health of the river flowing past the mission grounds. In June of last year, mission employees began a formal water-quality monitoring program, and what they've found is that the water is anything but clean.

"The E.coli counts are very high," Carrico said. "In fact, we have signs posted that say the quality in the river does not meet federal standards for partial body contact. At this point in time, there is no plan as to how to clean up the river; the first step is to consider what is in the river and where it is coming from.

"The one thing that we will do is connect the mission compound physically with the Anza Trail (a riverside trail that follows part of the route taken by Juan Bautista de Anza, the adventuring founder of the presidio at San Francisco) in a more convenient way," Carrico said. "This will reconnect the mission with the Santa Cruz River."

And that certainly makes sense, since neither the O'odham village that became the Mission Tumacacori, nor much of anything else in this valley, would have existed without that sad little river. 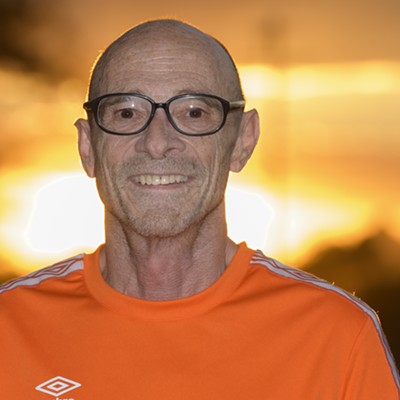