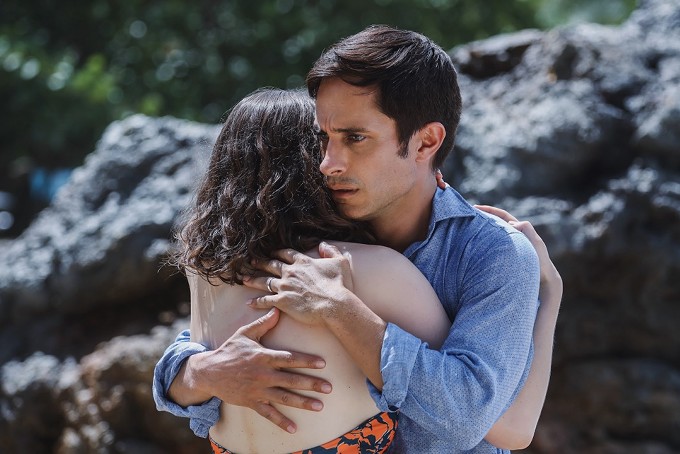 With 'Old,' M. Night Shyamalan once again overbakes his cinematic souffle and the damn thing collapses before it makes it out of the oven.

Too bad, because there are elements at play during its running time that make it occasionally feel like one of the more bizarre, daring and wacky thrillers he's ever made. Shyamalan's perfectionist tendencies work to derail what could've been the darkest of darkest horror comedies with solid satirical bite. In the end, it's just another out of nowhere, poorly executed Shyamalan twist and tidy ending that'll send you home with that, "Oh, I have been Shyamalanned, again!" feeling.

A family shows up at a super spiffy tropical resort for some much-needed R&R. Guy (Gael Barcia Bernal) and Prisca (Vicky Krieps) are dealing with some marital and medical problems, and their two children, 11-year-old Maddox (Alexa Swinton) and 6-year-old Trent (Nolan River), are all about going to the beach. They eventually make it to a special beach courtesy of a shuttle driver played by Shyamalan himself. (Not a good sign!) They, and a host of other resort guests, make their way through a small canyon to a delightful enough beach for some fun in the sun.

The Twilight Zone stuff kicks in almost immediately, as Maddox and Trent return from a beach exploration five years older. They eventually age into actress Thomasin McKenzie and actor Alex Wolff as the beach is a place where you somehow age 50 years in a day. That's bad news for some of the older folks on this excursion, and it lends to pre-existing medical conditions exploding in grotesque (albeit PG-13) ways.

There's a stretch of this movie that is equally hilarious and disturbing, as well balanced a stretch of running time Shyamalan has ever put to film. Then, it all slips away and the whole darned thing is squandered in favor of tidy screenwriting, keeping the proceedings below the R-rating, and trying to send folks home with a sense of closure.

No, no, no. If there was ever a movie that didn't require a tidy ending and warm feelings, it's this one! It's astounding how Shyamalan can flirt with something so perfectly demented and then just piss it all away. The movie is based on a graphic novel called Sandcastle, and having read that novel, it's fair to say he takes a lot of liberties. Some of them clever, some of them catastrophically bad. The movie's failures can't be blamed on the source material. Shyamalan screws himself.

The cast actually does great work despite the sporadically messy assignment they've been handed. McKenzie is a terrific actress, and while the movie doesn't spend enough time dealing with the complexities of an 11-year-old in a woman's body, she does manage a few good bizarro moments. Wolff is equally good, especially when his character gets into a predicament with his vacation girlfriend. That predicament is the film's outrageous highlight.

The dialogue gets a little wordy in that Shyamalan style where he holds your hand and over explains things, but for much of the time, it actually contributes to the weirdness of the movie. The characters don't talk like normal people talking because Shyamalan has a hard time writing realistic dialogue, but it totally suits the picture's odd, unorthodox pace from about the midway point until near the ending.

Some moments in the film, where the camera seems to be averting its eyes during the rough stuff, give the vibe that there was an R-rated cut at work. It's PG-13, and that rating keeps things a little too tame given the subject matter. This is messy business, and the film should be messy.

As for the overall statements on aging, Shyamalan sees the positives with the negatives when it comes to the years passing. Mostly the negatives, as people contort due to calcium deficiencies, or have fatal seizures, or fall off cliffs because they are trying to escape getting old. As for the folks with degenerative mental ailments (one in particular played by Rufus Sewell), they get homicidal. On second thought, Shyamalan doesn't really see anything positive in aging.

As for the wrap up, it's part sinisterly clever, and part totally unnecessary. That unnecessary part goes against the grain of the whole movie, and results in M. Night failing to stick the landing. Sadly, Shyamalan screwing up the endings is as inevitable as the aging process getting lampooned in Old.