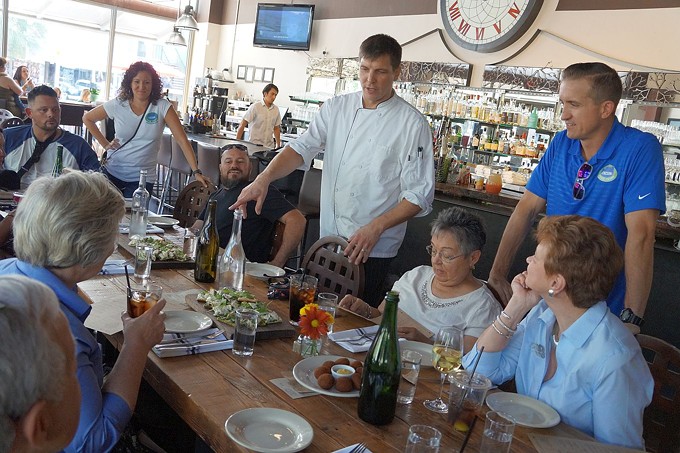 It's the New Year. You said that you were going to finally join that gym. But this is the Chow section. We have to talk about food. So, let's combine eating and exercise, shall we?

Get your comfy shoes on and stretch those legs and belly because Tucson Food Tours is the perfect way to start 2018 with a bit of movement and a lot of munching. Now entering their sixth year in business, Bradner and Maria Lawrence have a new course that you can select, and I was fortunate enough to trek along with them and a few lucky and adventurous customers on their maiden voyage along Fourth Avenue and Main Gate Square.

The longstanding downtown walking tour, with stops to get a frosty treat at HUB Ice Creamery, a slice at Empire Pizza and historically delicious bites at El Charro, is always a fun way to spend an afternoon, whether you're a local or someone visiting the Old Pueblo. It's not just walking from place to place, getting a drink and having a snack; Brad and Maria also include facts, stories and information about each location, and then some, along the path. Do you know which downtown hot spot used to be a funeral parlor? Well...you'll just have to take a tour and find out.

I was excited to see what was on the agenda for the new Fourth Avenue and Main Gate Square expedition because some of my favorite eateries reside on those streets. We all met in the Hotel Congress patio around 10:30 a.m., as the tours usually start around 11. And be sure that you have the whole afternoon free because each tour is about four hours long. That's a lot of hiking and eating, but it's so much fun that the day goes by fairly quick.

After walking through the tunnel and coming out on the main drag of Fourth Avenue, Bradner, who is also a fire fighter, immediately began pointing out interesting facts about buildings and businesses on the avenue. I was the only local in the group, so it was fun to see the visitor's eyes light up when they saw the giant tiki head at The Hut, which came from a defunct mini golf course. Can you remember the name of the mini golf course? Then take the tour.

First stop was at Café Passe where we were treated to some iced coffee. The day was unseasonably warm so the cool and caffeinated refreshment was very welcome. From there, we made our way to the Drunken Chicken, where plates of deep fried delights were passed around. The crew at the Drunken Chicken were so generous with the samples that I was worried I'd ruin my appetite at the first stop with food.

Next we made it to Boca Tacos and chef Maria was there offering up some of her award-winning carne asada creations. When one Food Tour patron said that he liked his salsa really spicy, chef Maria did not hesitate to bring out a bottle of her ghost pepper concoction. After a few bites, the guy from the mid-west began to tear up, face going flush. I added a bit to my taco, and yeah, chef Maria knows what she is doing.

It was probably around the time we got to Lindy's, sharing their famous burgers and piles of fries, that I knew I was in trouble. We still had two hours left, and I was getting a little full. For $55, you easily get your money's worth in food, fun and relaxed fitness.

After snacking on stuffed rice balls at Tallboys, we then made our way up Fourth and down University. This is where you start to work off some of those calories you just packed in. That's just under a mile of walking to the next destination, Red's Smokehouse, so your New Year's plan on getting in shape is basically underway. In theory.

The staff at Red's hooks you up with some meaty treats, such as burnt ends as well as cornbread and slaw. Like I said, all of this amazing grub comes included in the ticket price. Some of the younger tourists were drinking along the way so they had to pay for that. Otherwise, you eat and drink far more than what you paid for.

The final stop was at The Dutch, where chef Marcus brought out platters of his bitterballen, which are essentially Dutch meatballs and some pesto and goat cheese flatbread pizzas. I couldn't ask for a better way to end the day. Best part is, Tucson Food Tours provides you with a Sun Link ticket, so you don't have to walk all the way back to your car. Unless of course that's what you want to do. You did eat a lot of food, and you wanted to keep that resolution, right?