The Long and Winding Load 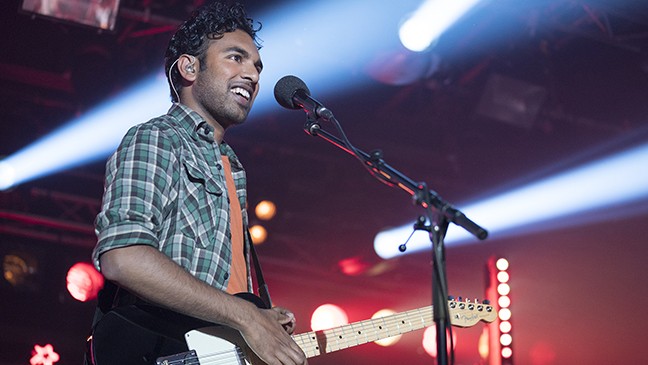 Courtesy Photo
Despite an interesting premise and Beatles music, Yesterday fails to make an impression.
Man, I just wanted to punch this stupid movie in the face for nearly the entire time I was watching it. Stupid-assed, stupid movie.

Yesterday takes an interesting premise, "What would the world be like if the music of The Beatles didn't exist?," and totally squanders it.

Danny Boyle (127 Hours, 28 Days Later) directs the straining saga of Jack Malik (Himesh Patel), a wannabe musician working part time in a grocery store while also busking on street corners and playing small solo gigs with his trusty guitar. Jack's burgeoning music career is managed by Ellie (Lily James), who is fostering a decades-old crush on Jack while getting him gigs at closing hotels and side tents at music festivals.

Riding his bike home from a gig, the world suffers some sort of momentary power loss, and Jack gets hit by a bus, knocking out a couple of teeth and sending him to the hospital. Just before his accident, Jack swore to end his music career, probably a good idea because he totally sucks.

Post-accident, Ellie and some friends gift Jack a new guitar, and suggest he bust out song for them. He goes with "Yesterday" by The Beatles, and the group is moved, as if hearing the song for the first time. That's because they are hearing it for the first time. A quick Google check by Jack confirms the impossible: Somehow, someway, Jack now lives in a parallel world where John, Paul, George and Ringo never came together to make music.

So what does Jack do? Why he plagiarizes the entire Beatles catalogue, of course. He plasters post-its for their songs all over his room, and starts recreating their tracks. He struggles with the lyrics to "Eleanor Rigby," but he gets enough right to catch the eyes and ears of agents and producers everywhere. Jack doesn't really look like a rock star but, no matter. With the music of The Beatles propelling him, this kid is going places.

Now, this act, stealing the music of the best group in rock history, is a grievous action, is it not? Only a true prick would steal music and try to pass it off as his own, right? Well, this is where the movie goes terribly wrong. Rather than exploring the dark side of plagiarism in a comedic way, Boyle's movie begs you to love Jack, and to sympathize with him while he tries to figure out his romantic interest in Ellie.

This results in a movie that is always uncomfortable to watch because Jack is nothing short of a total dick. Rather than crafting a film that seriously addresses a world without The Beatles, the movie becomes scared of itself and becomes nothing but a lame rom-com. An opportunity for some mind-bending dark comedy becomes nothing but an exercise in whether he will kiss her or not.

Actually, the movie does take a stab at something profound with a special appearance by a historical figure late in the film. Beatles fans will cry blasphemy because the movie simply doesn't earn this moment. Furthermore, the moment is treated with a strange kind of casual bemusement that struck me as offensive. As for the appearance of Ed Sheeran, I was actually OK with a scene where the pop star got put in his place because, you know, fuck that guy.

Movies that feature Beatles music can be a great thing. Apart from the films the actual Fab Four participated in, Across the Universe stands as a fine exercise on how to use their music in the modern film era.

Yesterday is a vapid, unimaginative mess. It has no real reason to exist other than trying to find a way to roll out Beatles music for a new generation of moviegoers. The film actually had me wincing at the sound of their music given the mode it was presented in. You have to really screw up to make The Beatles boring. ■