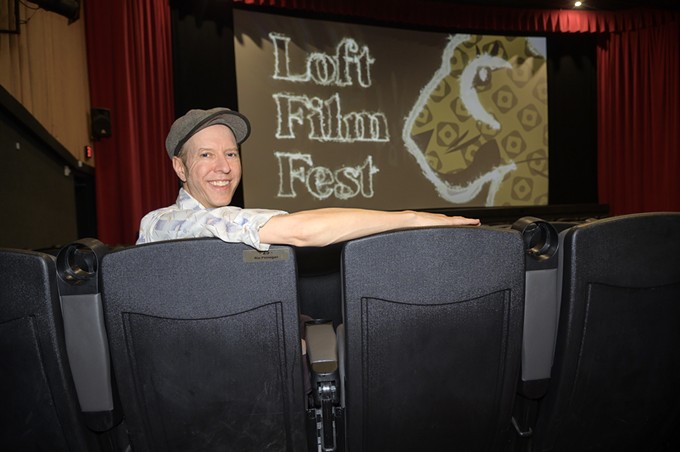 (Noelle Haro-Gomez/Contributor)
Jeff Yanc, program director of the Loft Cinema, has worked there for the past 15 years. He says his lifelong obsession started with childhood.

The Loft Cinema is celebrating the silver screen — and its 50th anniversary — during the 12th Loft Film Fest from Wednesday, Oct. 12 to Thursday, Oct. 20.

Showcasing over 45 features and shorts programs, the festival debuts the documentary “Anatomy of an Arthouse: 50 Years of the Loft Cinema,” in celebration of the theater’s golden anniversary.

Jeff Yanc, the cinema’s program director of the past 16 years, said the arthouse is back at “full throttle,” re-emerging from reduced operations during the pandemic.

“Festivals are a great experience if you love film,” Yanc said. “There’s an entire universe of the movies out there that you may never see in a theater because a lot of these movies just don’t get released or they will disappear on a streaming platform.”

Yanc — a UA alum with a master’s degree in film history — formerly owned Reader’s Oasis before working at the Loft. A serendipitous job opening occurred at the arthouse around the same time of the bookstore’s closure.

“A big part of the job is watching movies, going to film festivals and scouting films,” Yanc said. “There’s also an educational component because I introduce and give talks on films.”

Part of the nonprofit cinema’s identity is to show films “slightly out of the mainstream” like alternative or foreign flicks or documentaries, he said.

“People are more willing to take chances at festivals, to see some offbeat movies that they haven’t heard of before,” Yanc said.

The festival’s program includes filmmakers and actors such as Wes Studi, 2019 Honorary Academy Award recipient for his lifetime achievement.

“We’re showing the movie he credits as sort of creating his career as a mainstream actor, ‘The Last of the Mohicans,’” Yanc said. The film, which celebrates its 30th anniversary this year, will offer a Q&A with Studi after the film screens.

Also featured will be British actress Jacqueline Bisset, whom Yanc calls “Hollywood royalty. Working primarily in the 1970s and 1980s, her resume includes the 1973 Academy Award-winning Best Foreign Language Film, “Day for Night.” Studi, Bisset and actor/musician Gary Farmer are set to receive the 2022 Lofty Achievement Awards for their contributions in cinema.

“I’m excited about opening night because it’s very specifically a Tucson-kind of event,” Yanc said. The lineup includes the premier of “Quantum Cowboys,” a rotoscope animation and Western film about time travel and what Yanc calls “cosmic landscape that is actually Arizona.”

Tucson’s Howe Gelb, whom Yanc described as producing music that “sounds like Tucson,” wrote the film’s score and makes an appearance.

Films including the documentary about the arthouse which will be featured on Saturday, Oct. 15, will also have a few familiar faces.

Mike Plante, one of the film’s directors said the film is a commemoration of the 50th anniversary of the “New” Loft which used to be, “a bit of a grindhouse” during the 1970s.

Originally a meeting place for LDS student members and a community theater space turned adult film house in the late 1960s, emerged The New Loft Cinema in 1972, on the UA campus.

Yanc added, “It was called the Loft because it was on top of another business and you had to climb the staircase to get there.”

Locals have fond memories of films that played in the formerly dilapidated theater.

“We really stuck to the real core of people who were operating the theater throughout the ’70s, ’80s and ’90s,” Plante said.

Featured are Nancy Sher, founder of the New Loft Cinema, and original theater manager, Bob Campbell, original director of programming, and former Arizona Daily Star critic and Joe Esposito, former owner, theater manager and film programmer in the ’70s, ’80s and ’90s. Plante and Willis will attend and facilitate a Q&A with some of the film’s interview subjects immediately after the showing.

Plante, a UA alum, is also a former Loft employee who worked in every position, ranging from the box office to concessions. His time as a projectionist allowed him to branch out and work at film festivals, including the Arizona Film Festival in the early ’90s.

“We’re hoping just by watching this, you get excited about all of the movies that come through theaters like this,” Plante said. “This excitement around this arthouse culture.”

The Loft’s mission as an arthouse is to “build community by celebrating the art and diversity of film,” influencing the “philosophy” of the films that are shown.

“There’s an interesting cross section to all of that, to where it feels like you feel somebody in the building is picking the films that show, which we know to literally be true,” Plante said.

“That’s one of the most gratifying parts of the job to me, is knowing that (the theater) is a part of the cultural landscape and transcends beyond just being a place to watch movies,” Yanc said.

Through partnership events and community initiatives such as specific film series, the Solar Cinema program, the Loft Kids Fest and the Loft Film Festival, the arthouse continues to cultivate a special moviegoing experience for locals that has proven to withstand the tests of time.