You’ll be thrilled to death with Zombieland: Double Tap 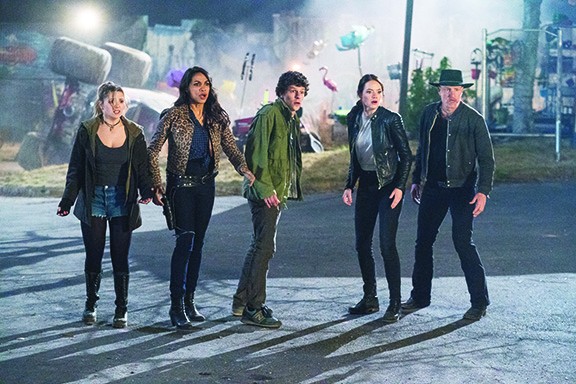 Sony Pictures
Since the release of the first Zombieland back in 2009, much has happened in the entertainment land of the undead. A little show called The Walking Dead premiered a year later and, sadly, the zombie maestro himself, George Romero, passed away.

A decade later, Emma Stone has an Oscar for La La Land, Woody Harrelson got his third nomination in that stretch, and Jesse Eisenberg was nominated for The Social Network. Abigail Breslin also had an Oscar nom before the first film for Little Miss Sunshine. With all of this Oscar business, might this crew of performers opt for more snobby fare rather than blowing up ghoul skulls for laughs?

Nope, director Ruben Fleischer returns with the whole crew shockingly intact for Zombieland: Double Tap, a film that does little to reinvigorate the genre, but still delivers plenty of laughs and zombie gore to merit a look. It's basically the same as the first movie, with a little less originality punch, but some more laughs thanks to a new costar.

The zombie killers have taken up residence in the White House, with Wichita (Stone) and Columbus (Eisenberg) in a relationship that requires them to cover up the eyes on the Lincoln portrait when they bed down at night. Columbus has his sights set on marriage, while Wichita still has some commitment issues. Tallahassee (Harrelson) is still searching for Twinkies with a new goal to visit Graceland and leave shredded zombies in his wake, while Little Rock (Breslin) wouldn't mind having her first boyfriend ever at the age of 22. Situations arise where it all becomes a road trip again, one that eventually leads to Graceland (sort of) and a commune called Babylon that looks like one of the towers that was on the cover of Wilco's classic album Yankee Hotel Foxtrot.

Columbus and Tallahassee ride Segways at a decimated mall (an ode to Romero's Dawn of the Dead) and run into Madison (Zoey Deutch), a Valley Girl who has survived all these years living inside a freezer at the food court's frozen yogurt shop. Deutch is a total crack up here, mining laughs in every scene she occupies. When the film threatens to go a bit stale, Madison swoops in donning her pink leisure suit with fake fur (she's also a vegan) and livens things up.

Another joke that works out just fine would be the late-in-the-movie entrance of Albuquerque (Luke Wilson) and Flagstaff (Thomas Middleditch) two zombie hunters who look and sound an awful lot like Columbus and Tallahassee. In rehashing this movie, I'm realizing that Albuquerque's monster truck (and the worn-down White House) remind of Wilson's turn in Idiocracy. Don't you love how Idiocracy has become a classic after the studio dumped it because they thought it sucked? OK...I've gone off track.

Of the returning big stars, Harrelson appears to be having the most fun, even going so far as to provide a decent cover of "Burning Love" over the closing credits. (Stay all the way through the credits, people.) Eisenberg is basically doing his usual shtick, but it's a shtick that works, while Stone being in this movie at all is still shocking to me. I mean, she's fine in it, but it's weird that she's returned for this, right? She was in The Favourite last year!

As far as bringing new ideas to the zombie genre, I do like how Columbus designates dumb zombies as Homers and smart ones as Hawkings. There are also the "T-800" zombies, who don't go down after the double tap and keep on coming. Otherwise, the film is pretty standard issue when it comes to zombie carnage.

Will there be another Zombieland 10 years from now? This one strikes me as a last hurrah, and an OK/fun one at that. Say, do you remember there was supposed to be a Zombieland TV show back in 2013, but the pilot didn't get picked up? You don't remember? That's because it really sucked.