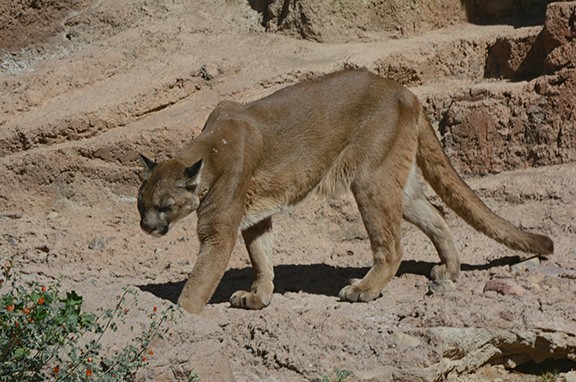 BigStock
It's often been said that the collective soul of humankind needs wild places as well as the magnificent creatures that dwell there. The killing of a mother cougar and her two offspring found scavenging on human remains on the eve of the New Year in Pima Canyon may prove that adage true. In social gatherings and online chats, sentiments sounded angrily, assuming there had been a humane alternative for the three mountain lions.

According to Arizona Game and Fish Information Officer Mark Hart, the department had to proceed with the hand they'd been dealt: The predators were unafraid of the approaching officers (though no hazing tactics were employed) and British Columbia Game and Fish Predator Attack Team specialist Kevin Van Damme advised that the mountain lions should be put down.

Hart's department emphasized over and over that the cats were demonstrating unnatural and dangerous behavior, and that AGFD were unwilling to take a chance of them being an issue in the future (read: lawsuit).

In a press release titled, "Dispelling Myths and Urban Legends," experts from the Mountain Lion Foundation replied that cougars are indeed opportunistic feeders—a well-known fact that researchers of the species readily depend on for their capture. And there is no scientific evidence to support the notion that once cougars have tasted human remains, they will seek it out. Animal behavior expert and wildlife and conservation biologist Dr. Jennifer Verdolin explains: "There is no substantial evidence that mountain lions scavenging on an animal that is not typically on their menu—including humans—will begin hunting them." Interestingly, the mountain lions in British Columbia—which has far greater incidents of mountain lion attacks than anywhere in the United States—are also the least habituated to the human presence in their environment.

"As humans we imagine such a large predator must want to harm or eat us. They do not," Verdolin continues. "The vast majority of attacks involve territorial issues (approaching a mountain lion feeding), surprise encounters (mother with young), or running past a mountain lion (triggering chase response)."

In 2017 the remains of a deceased woman were found in Placer County, California near the American River. Coroner evidence revealed that Yinshan Wong had been partially eaten by a mountain lion, but not killed by it. Ryan Sabalow of the Sacramento Bee reported: "State wildlife officials say they have no plans to trap or kill the cougar that fed on Wong. Steve Torres, who oversees the state's wildlife investigations lab in Rancho Cordova, said there is no evidence to suggest a lion that scavenges on a human corpse becomes more likely to hunt humans. Scavenging is normal for cougars..."

Describing human/predator conflict in a 2004 article for the San Diego Tribune, Mr. Steve Martarano, a former spokesperson for California Department of Fish and Wildlife had this to say, "Just because you see a lion doesn't mean it's going to attack you. That's a big message to put out there." Mountain lions, like any predator, he continued, "do not attack prey that can harm them for fun. Attacking any animal is risky business, and predators attack only the minimum number of targets they can find, due to the risk of injury to themselves."

In support of these claims, a 100-year survey of attacks on people in both the US and Canada showed a total of 27 human fatalities. Given these numbers, it's curious why anyone would worry about such a rare danger rather than a common one like driving or discharge of a firearm. Perhaps the uncommonness of the act is the very reason we dwell on it.

But what justifiable premise is there in protesting the death of these seemingly indomitable felids living in our urban-wilderness interface? Is our identity and wellbeing mysteriously intertwined in their welfare? Certainly there's no sane person who doesn't respect the power, predatory skill and grace of the cougar. But what invisible connection do we share that brings out such viral foment at the very thought of their demise? Does their struggle for survival in a fractionalized habitat speak to our nagging burden of a world undone by our own burgeoning numbers, colossal urbanization and subsequent climate chaos? Do we understand on some primal level both the intrinsic and extrinsic role these big cats play?

And if we are so prone to cling to that fierce yet fragile connection we have to this iconic species, how can we apply some modem of realistic stewardship that would actually make a difference in their favor and ours? To answer that question requires an examination of how humans relate to animals on a deeper level.

Generally speaking, there are two camps of advocacy: (A) The utilitarian view that animals are a resource to be utilized, and (B) Biodiversity needs to exist for its own sake and our very survival. The first ideal is held largely by the wildlife conservation community, such as state-run Game & Fish Departments, and the latter by conservation biologists—think Rachel Carson, Jane Goodall, John A. Vucetich.

State-run agencies place an overwhelming reliance on the North American Model of Wildlife Conservation, which has governed the principles of management since the Roosevelt era. In that model we accept man as the apex predator and all other animals (game and non-game species) as our resources. This position affords people the right to hunt, trap, fish, use off-road vehicles and otherwise recreate on millions of acres of public land year round. In Arizona, licenses and tags purchased for hunting, fishing and trapping of fur-bearing animals afford the agency the majority of the funds it requires to cover the breadth of their work.

In his keynote address to attendees at the 2017 Mountain Lion Workshop in Estes Park, Jerry Apker, a carnivore biologist with Colorado Parks and Wildlife, stated: "The current funding mechanism makes wildlife agencies primarily beholden to license buyers. Speaking from my personal experience, in my 38 years with CPW I have always paid more attention, given more credence and time to hunters, trappers, and anglers than any other group—because ungulate licenses generate the abundance of agency funding, we have an ungulate-centric management."

The commodity philosophy of wildlife management is a national and cultural issue. In the United States approximately 13.7 million people hunt, according to a 2018 U.S. Fish and Wildlife study. This accounts for about 2.5 percent of the population controlling the policies of a governing body that oversees the diversity of species on our public lands, and the science used to determine the need to "harvest" predator species. In Arizona that means 348 mountain lions will be trophy-hunted from August 2019 to May 2020, according to the AZGFD website. This does not include mountain lions and other wildlife killed by USDA-APHIS Wildlife Services (previously known as Animal Damage Control) to safeguard ranching interests.

Unquestionably, the agenda of stakeholders within the Game & Fish Commission translates into department policy. In Arizona, representatives of hunting and ranching interests—the Commission Appointment Recommendation Board—nominate candidates for open positions and the governor must choose only from those nominees.

"The demands and move to change the Department and Commission's management policies for mountain lions have been ongoing and difficult," says local wildlife biologist and jaguar expert Sergio Avila. "Many groups have worked on this. Some people have suggested trying to diversify their funding, so hunting licenses don't dominate the policies against predators to favor 'game' species."

Just as the Pittman-Robertson Act taxes ammunition and peripherals related to hunting, Arizona could implement a small state tax on outdoor recreation gear to fund habitat restoration and protection corridors not only vital to mountain lion movement throughout the Sky Islands, but providing ecological benefit to the ecosystem as a whole. If the 100 million bird watchers, photographers, and other non-consumptive recreationists in the United States truly feel that wildlife belongs to the public trust, then responsibility must be taken for supporting the protection and conservation of biodiversity. Such policies can be established through state legislation creating a more diverse public base both financially and politically. But until there is a shift in the public perspective on how management principles should be amended at an agency level, unrestricted by allegiances to hunting and game species, with the combined knowledge, vision and efforts of conservation biologists and state wildlife agencies, it will be business as usual.

Editor's Note: This story incorrectly identified Steve Martarano as a former biologist. He is a former spokesperson for the California Department of Fish and Wildlife. This story has been corrected.