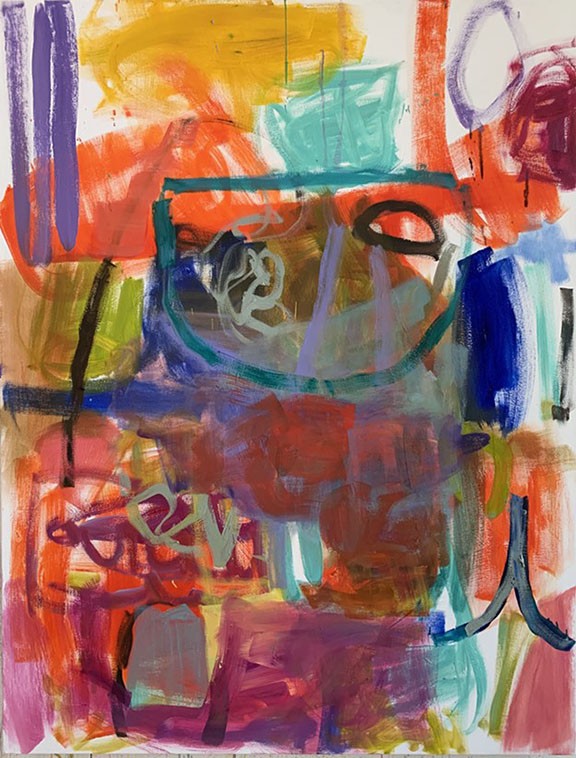 Pure Abstract: Paintings by Joanne Kerrihard, collage and paintings by Amy Metier and sculpture by Steve Murphy. It actually opens at 11 a.m. Saturday but the free reception will run from 6 to 8 p.m. Kerrihard is a Tucson artist, while Metier is based in Colorado and Murphy in Texas. It runs through Feb. 22.

Davis Dominguez, a long-running gallery of contemporary art and a respected venue that shows many local artists, will close its doors at the end of June.

After that, the gallery's elegant warehouse space at 154 E. Sixth St. might house the popular Mexican restaurant Lerua's, which lost its own longtime space to the Broadway widening, Lerua's is in negotiations, says building owner Mark Berman, but no contract has yet been signed. Wife and husband gallerists, Candice Davis, 72, and Mike Dominguez, 73, say that they had been considering closing the gallery for some time. "Candy and I have been semi-retired for the last couple of years," Dominguez said Wednesday afternoon; painter Juan Enriquez has been running the gallery several days a week. The two owners are devoted hikers who regularly do wilderness backpacking.

"We're in good shape," Davis says. "There are lots of things we can do We'd like to do more hiking, see more movies at The Loft and go to music performances." Berman said that their current lease actually ends March 1, but he's allowing the pair to keep the gallery going until June 30, when Davis Dominquez typically ends its season.

The gallery will stage three more shows, including Pure Abstract: Paintings by Joanne Kerrihard, collage and paintings by Amy Metier and sculpture by Steve Murphy, which runs through Feb. 22. (See details on all three shows in the info box.)

Dominguez and Davis have rented the space from Berman for some 20 years, and they've had a productive relationship, they say. "Mark is the finest landlord and a great supporter of the arts," Dominguez says.

Dominguez estimates that he and his wife have staged some 250 shows in their long career but they didn't start out as art professionals. The California transplants had degrees in business (Dominguez) and Spanish and literature (Davis) when they opened their first gallery, The Hand-up, in 1976.

They had come to Tucson because "we're suckers for the desert," Davis says.

Their gallery, in the Pioneer Hotel downtown, did a brisk business in framed posters and prints that landed on office walls. But the emerging gallerists soon got a lucky break into the fine arts world.

The Spectrum, a gallery on Speedway, was closing and asked The Hang-up to stage a show that had been promised to Jack Welpott, a serious San Francisco photographer. The Welpott exhibition was a such success for The Hang-up that the couple next exhibited photos by Harold Jones, a professor and founding director of the Center for Creative Photography.

From there, they were off and running.

Eventually the pair vacated downtown Tucson, moving the gallery to two successive spaces in the Foothills and renaming the enterprise Davis Gallery. But in 1998, Bob Yassin, then director of the Tucson Museum of Art, urged the pair to return to downtown.

"We got excited and started looking," Davis says. Berman was renovating the historic Tucson Warehouse and Transfer Building and "he gave us a good deal" on a huge space with high ceilings graced with wood buttresses. The business, by now renamed Davis Dominguez Gallery, prospered. The big, first-floor room allowed them to show large-scale sculpture, which became a gallery specialty, and gigantic abstract paintings.

"It was beautiful!" Dominguez said. "We tripled our business.

The gallery immediately gave a shot in the arm to the arts in a downtown that was struggling. A gallery district has grown up around Sixth and Sixth ever since Davis Dominguez arrived, and although many venues have failed, others soldier on: Contreras Gallery, Raices Taller, Gallery 2 Sun and Andrew Smith Gallery are all operating nearby.

And the couple injected energy into its arts neighborhood by creating the Central Tucson Gallery Association. On three Saturday evenings each year, all the association galleries open their doors at the same time. Dominguez wrote an email last week to the member galleries alerting them of the gallery's closing and announcing that he would step down as the group's manager.

Delicious as Lerua's famed tamales may be, the closing of the gallery will be a loss to Tucson and its art scene. That will be one less venue devoted to contemporary art and one less outlet for Tucson artists to show their work.

It will be a scramble for Davis and Dominguez to clear out their gallery after the final exhibition ends June 13. Among the many tasks looming before the end date of June 30, the owners will have to ship several years' worth of artworks back to the artists.