The Curry Pot Is a roving shrine to Sri Lankan cuisine 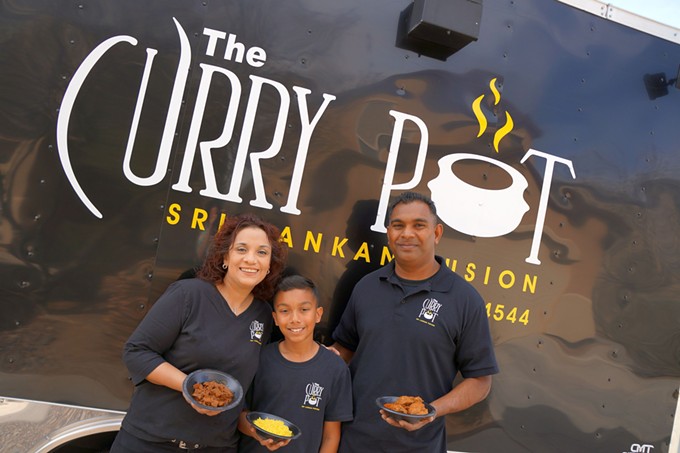 Just a few short years ago there was this literal explosion of food trucks suddenly presiding all over the greater Tucson vicinity. It seems, however, that formative blast has subsided a bit. Factually, there still is a lot of up-and-coming trucks putting out decent grub for folks on the go or on the prowl for something new and different, but in my experience, I have narrowed down the Tucson food truck scene into three groups:

The Curry Pot is definitely in the latter caste. If you are lucky, you have seen the sleek, square, black truck parked somewhere and stopped to get a heaping plate of regional Sri Lankan goodness. After eating the straightforward yet extremely dynamic food they create, you know why the Curry Pot is still around and still one of the best Asian eateries on four wheels. Or no wheels, even.

"What I like best about being a food truck rather than a structured restaurant is the pleasure of going to new places and always seeing new faces," says Curry Pot owner and chef Amjaad "AJ" Jhan. "The tastes of our customers differ depending on the location. When we park in front of breweries or tap houses, they usually order vegetarian. But at sporting events and industrial work areas they tend to steer towards the meat. I like that diversity. It keeps me on my toes."

Sri Lankan cuisine has many influences, the most obvious being neighboring southern India, but there are also hints from Indonesia and even the Netherlands via colonization in the 19th century. But, all those diverse impressions really boil down to one thing: curry. Jhan just didn't name his business after the main component in most of his dishes; the man actually grows curry leaf plants in the backyard of his family's house. He and his wife, who is Sri Lankan like Jhan but a Tucson local, construct a magnificently potent blend for both the meat and vegetarian plates, with results ranging from delicate to nearly eye-watering. Having eaten both sides of the spicy taste spectrum, I found happiness in either the calm or the calamity.

Jhan was hesitant about starting a food truck, even though fans of the samosas he would bring to his son's martial-arts competitions were encouraging. It took the success of the Twisted Tandoor to make Jhan think otherwise. He figured if Tucson could embrace an Indian food truck concept, why not a Sri Lankan? While still working a full-time job with Trader Joe's, he purchased a truck and began prepping and cooking on board, using recipes inspired by his mom's home-cooked food. Jhan struck a deal with Tap & Bottle and on his opening night he sold out in a few short hours. From there, word spread about the homespun immensity of Curry Pot's food. In 2017, the truck—and Jhan—won the prestigious nod of being the best Asian food truck in the United States. Not just Arizona, the whole flippin' country.

The signature dish—the one AJ said he would cook for the Pope—is the chicken curry ($8 for the meal; $10 for the combo that includes a drink and samosa). It comes with rice or a fluffy flatbread called "farata" (which I highly recommend if you want to sample something you've never sampled before) and a coconut sambal. The use of coconut milk in the curries makes all of Curry Pot's vegetarian dishes 100 percent vegan. And all of the curry dishes are gluten free as well, if you're into that sort of thing.

The vegetables in the vegetable curry vary depending on the season and the availability of fresh produce, so the menu options are always changing a bit. Plus, there are variations on the daily special theme; one night you may be privy to some lentil curry or perhaps a lamb dish or curried shrimp. So keep a watchful eye out for the Curry Pot truck as you scoot around town looking for food that immediately invigorates yet delightfully provokes. No matter what Jhan and his wife devise in the limited space on the truck, it will always be delicious because, in my humble opinion, that's exactly what Sri Lankan food is. Delicious. Yet simple. And highly complex. Once you've eaten from the Curry Pot, you'll know what I'm getting at here.