The Fight for San Pedro 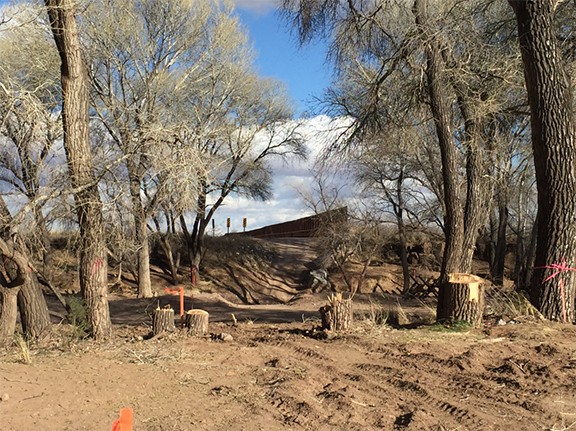 Jeff Sturges
Cottonwood trees at the San Pedro River were cut down to make way for the border wall.
On Sunday, Jan. 26, a crowd of more than 1,000 gathered on a remote bridge in rural Arizona to protest the construction of a border wall across the San Pedro River, the last major undammed river in the Southwest.

The protest—possibly the largest political demonstration in Cochise County history—occurred only days after government contractors wrapped pink tape reading "remove tree" around a dozen cottonwoods on the banks of the San Pedro. One week after the protest, workers cut down those trees to continue building the border wall which stretches unbroken some 40 miles to the east and 10 miles to the west.

The San Pedro River, which flows north from Mexico into Arizona, is a sandy and quiet stream home to more than a dozen mammal species and hundreds of bird species. But on Jan. 26, cars lined both sides of Hereford Road as protesters gathered with signs reading "No Wall" and "Save the San Pedro River."

"We didn't know if there would be 50 or 500 or, as it turned out, even more," says Sierra Vista resident Tricia Gerrodette, who helped organize the Jan. 26 demonstration. "I think those pictures coming out made it more real for a lot of people... People started going out to the river and looking at those flagged trees, realizing the wall was happening."

According to event organizer Jeff Sturges, one of the big frustrations regarding the San Pedro construction is "getting any kind of information whatsoever" from government agencies.

"We tried to reach out to every group we could and make it as wide a coalition as we could," Sturges says. "We even managed to elicit some Trump supporters who otherwise support a wall, but saw how ridiculous it would be to build a structure across the river."

The Department of Homeland Security and Customs and Border Protection have said little about what exactly will be constructed over the San Pedro since the contract was announced last May. However, the Bureau of Land Management did say building across the San Pedro would be an "engineering challenge."

"They've already started construction, but we still don't know what they're going to build," says Laiken Jordahl, borderlands campaigner for the Tucson-based Center for Biological Diversity, as well as a former National Park Service wilderness fellow. "But we're seeing heavy equipment and construction activity. And they've cut off road access to the site as well, so whatever they're doing, it seems like they're doing it in a very secretive manner."

At a Feb. 11 board meeting following the demonstration, the Cochise County Board of Supervisors approved a letter supporting Kirkpatrick's efforts encouraging the Department of Homeland Security to engage with local agencies and the general public to offer information about their border construction. According to the Board of Supervisors, Cochise County has "not been made aware of, or consulted on, any site plans or construction timelines."

If the more than 100 miles of border wall constructed during the Trump Administration are any indication, the San Pedro wall could be 18 feet tall and made of metal poles known as bollards with five-inch gaps between each pole. Environmental groups argue these gaps in the wall are insufficient to allow the San Pedro to continue to flow.

The Sonoran Desert's water cycle is reliant on monsoon storms that cause frequent flash floods full of debris that can easily clog small gaps, essentially damming the river. Even the far more open Normandy-style vehicle barriers previously placed across the San Pedro at the border became congested with river debris. These clogged bollards can alter water flow, redistribute sediment and change the flood patterns that are critical to riparian ecosystems.

With the border wall stretching multiple miles on each side, the San Pedro River opening remains the last natural migratory channel for wildlife in the area. Beavers, coati, javelina, mountain lions, deer, coyotes and other mammal species have all been observed traveling along the river.

"If they seal this area up, they will be blocking one of the best remaining wildlife corridors in the region," Jordahl says. "We remain confused and extremely concerned about what they're going to build."

Gerrodette argues that even if a bridge is constructed over the San Pedro, it may still hinder the river's flow, as "anything that can stop a human will obstruct the river."

The Trump Administration is able to construct the border wall with virtual impunity due to the 2005 Real ID Act, specifically Act Section 102, which amended the Illegal Immigration Reform and Immigrant Responsibility Act, and grants the Secretary of Homeland Security the authority to waive "all laws" they determine necessary to ensure expeditious construction of barriers and roads.

The Department of Homeland Security has used this power to waive 48 federal laws in order to construct the border wall, including the Clean Water Act, the Endangered Species Act, the Archaeological and Historic Preservation Act, the Clean Air Act, the Native American Graves Protection and Repatriation Act, the Safe Drinking Water Act and more.

These laws were also waived for ongoing border wall construction at Arizona's famous Organ Pipe Cactus National Monument, where contractors are clear-cutting flora and using explosives on the landscape.

"If they build a wall across the San Pedro, at some point it might be able to be torn down and restored, but you can't restore a mountain they blasted through," Sturges says.

In a November 2019 letter to the Border Patrol, Tohono O'odham Chairman Ned Norris said the construction activities in Organ Pipe have already resulted in the inadvertent discovery of human remains that would otherwise be protected by the Native American Graves Protection and Repatriation Act. In addition, Norris stated that the Tohono O'odham Nation learned that contractors are using 84,000 gallons of groundwater per day to construct wall segments in the Cactus Monument, stating, "the Nation had not received any information from CBP suggesting that the wall construction projects would require groundwater in quantities of that magnitude."

Customs and Border Protection did not offer information about the construction plans or timeline on the San Pedro River.

"It's significant that all these people came out to support a river," Jordahl says. "And it's across the political spectrum; there are conservative ranchers who are outraged about what is happening, because the public has no say. It's a huge amount of taxpayer dollars that are being funneled into this project, and there's no accountability, there's no transparency. And we could see the last free-flowing river in Arizona destroyed as a result... It's just heartbreaking, because there's so much public support for this river."