The Eyes Don't Have It

'Tron: Legacy' does a lot of things right, but it suffers due to one huge flaw

While the phrase "the eyes are the window to the soul" originally had nothing to do with modern visual effects, it offers the best explanation for the biggest flaw in TRON: Legacy.

In the opening scene—and then throughout the course of the film—a younger version of Kevin Flynn (Jeff Bridges) is brought to life through the magic of computers. Well, the younger vision is almost brought to life.

There have been attempts at this kind of thing before, notably the softening of the aging features of Patrick Stewart and Ian McKellen in the third X-Men film. But this is different: It's a virtual re-creation of Bridges as a young man. The hair is surprisingly perfect; the physical movements are mostly there; even the lips are more realistic than we're accustomed to from special effects.

But the eyes have no life or humanity—so a key character in TRON has no soul.

There is a mountain of CGI effects that the filmmakers get right, in jaw-dropping fashion. However, the one they get wrong is the biggest of the bunch, and because that effect is introduced early and resurfaces often, it hangs an albatross around TRON's neck that it never fully shakes.

It is not nitpicking to point out the flaws of one effect while, by comparison, glossing over all the others. The world of this film happens inside some computer code called The Grid, with humans—called "users" by its natives—comingling with programs. While the landscape itself is digital, and the film's precious few action sequences are also mostly the work of computer wizards, the inhabitants of The Grid are nevertheless portrayed by human actors—and good ones, too. Perhaps the best solution would have been to digitize them as well. The film would then be stuck with not only a dead-eyed Jeff Bridges, but also an over-the-top Michael Sheen and a dangerously sultry Olivia Wilde—both muted in post-production.

In its current form, however, TRON: Legacy only has one such half-breed, and it's the centerpiece of the story. As Flynn explains to his son, Sam, he had created his own digital mirror image, named CLU, and a computerized version of his best friend and business associate, named TRON, to help him create a perfect system inside The Grid. The work consumed Flynn when Sam was a boy, and he eventually left the human world (and his growing software-development company) behind, although never returning from The Grid may or may not have been in the computer genius' plans.

Some 20 years later, Sam (Garrett Hedlund) accidentally stumbles on his father's portal into The Grid, and a quest begins to get back home, to get answers, and to get Dad. Rookie director Joseph Kosinski displays great confidence and ability with what follows—a next-generation spin on the classic action battles from the original TRON from 1982. Beautiful stuff, indeed, and the film yearns for more of it.

The Grid has been dissected over time. Flynn lost control of the utopia he intended to create—and lost control of CLU, as well. The flesh-and-blood Flynn has retreated into the mountains, somehow off the grid within The Grid, and CLU dominates events in the expanding center of it all. There's some hokum about a group of organic beings that sprang to life on their own, a half-assed attempt to tie an evolutionary subplot to a 21st-century reworking of the Garden of Eden. It doesn't work—or even stand for anything—outside of making CLU the bad guy.

Unfortunately, making CLU a more prominent villain means he spends more time onscreen, and he'd be much more effective as a phantom than a presence, because every appearance is less and less believable. To Bridges' credit, his effortless voice acting stretches from haggard and subtle as Kevin Flynn, to younger and brash as CLU—a very subtle note from an actor whose career is built on such notes.

TRON: Legacy is a highly ambitious sequel that by and large overcomes a predictable variation on the biblical-creator/chosen-one story, which has become a staple in science fiction over the years. The computerized landscape is unlike anything the genre has produced. The musical score by Daft Punk is a perfect fit. The 3-D, rightly maligned in the past couple of years for being underwhelming and overpriced, is a welcome addition. Bridges is solid, and there are potential star-making turns by Hedlund and Wilde.

Where it truly counts, the majority of this film soars. But it very clearly misses one thing, by an uncomfortable margin. In a movie that implicitly warns of the dangers of technology advancing too far, too fast, the most critical technological aspect fails, showing just how far off that dangerous future must really be.

Tron: Legacy is not showing in any theaters in the area. 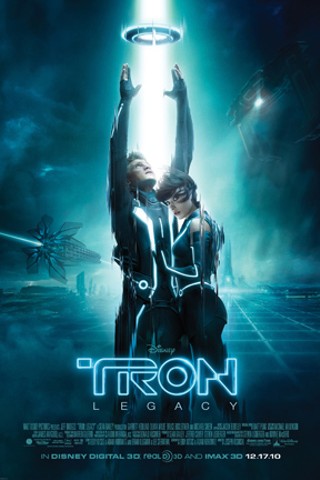