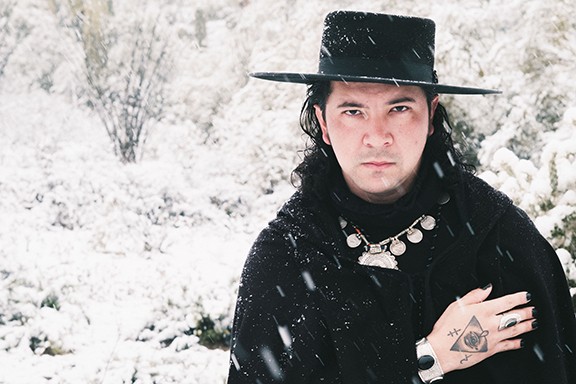 Courtesy photo
“I like the idea that when you listen to a record, you’re hearing a snapshot of that period in time,” says Gabe Sullivan, who has a CD release party this Friday at Hotel Congress. “I always try to hold myself to that standard as well.”

Newly a Los Angeles resident, Gabriel Sullivan wrote and recorded his latest album while he was thinking about moving away from Tucson, his hometown, but also the guiding spirit of his music.

Everything about the record—from his lyrics to his mindset to the instrumentation—evokes the desert, these arid madlands that Sullivan knew wouldn't be holding his daily life for much longer.

"It comes from being in Tucson, my mind immediately goes to these vast open landscapes," he says. "Especially with this record, there are no intentional narratives. It's literally painting landscapes, using broad scopes. Visually for me, when I picture the record it's very a Earth-toned, raw dirt record."

Black Crow is Sullivan's fifth solo album, but the first in five years, a period of time in which he's seen his psychedelic cumbia band XIXA take off, settled into a new studio and spent countless hours producing records for Billy Sedlmayr and European artists The Lost Brothers and Inex, who came looking for that desert inspiration themselves.

"The last few years, it's been a bit of a chaotic learning process, how to manage all these different projects, whether it's XIXA or my solo stuff or the studio and the producing," Sullivan says. "This is about coming back and putting everything else I've been doing the last few years, and now bring it all together on this album."

The album begins with Sullivan covering a Townes Van Zandt song, the early track "Black Crow Blues" that wasn't officially released until after the songwriting icon died. The song struck Sullivan like lightning, when his brother played a song he didn't know existed.

"That sparked the whole thing. I would honestly say this record is a pretty big nod, for me, to Townes," he says. "I thought I'd heard every Townes song there was. I played it nonstop on repeat for a couple days and that really sparked the entire vision for the record. That's what gives it that somber, melancholy vibe."

The album was written in about three months, while Sullivan was in the process of considering his move to LA. All the songs, with the exception of the cover and "Borrowed Blood," were written in that stretch of time. "Borrowed Blood" came from his 2014 song-a-day project, one that stood with him through live shows over the years and seemed to fit.

"I like the idea that when you listen to a record, you're hearing a snapshot of that period in time. I always try to hold myself to that standard as well," he says. "Get the record written and recorded and wrapped up and packaged in a block of time that represents that time."

Shortly after Sullivan had wrapped the writing and recording, the winter brought the desert a new look.

"There were two snows this year. The first time it snowed, I felt so ashamed that I didn't capture it," Sullivan says. "I hit up (photographer) Julius (Schlosburg) and said 'If this happens again, no matter what, I'm going to call you and we're going to get the fuck out into the desert. I didn't know what it was for or anything, I just knew I had to capture something in that environment."

Once Schlosburg sent over his photos from the day, Sullivan knew he had his album cover.

"What I love about all the music I've been making is just finding new ways to imagine that landscape. Typically for me, it's about trying to pull out the dark, violent, potentially frightening aspects of the desert," Sullivan says. "But then just seeing snow on top of all those cactus is a mindfuck and a backwards way of imagining the desert."

While Black Crow leans in one direction, Sullivan's latest project leans a different way. Or different ways, which was part of the plan when he decided to pull himself out of Tucson and focus on projects differently. There's Gnosis, an industrial-metal-electronic project with Ryan Alfred (who also plays on Black Crow), as well as a separate black metal band.

"Maybe my identity as a songwriter or musician is totally fucked, but I don't care. I'm getting back to how I felt in high school. I'm excited to go back to band practice with 20 metal riffs we can practice on," he says. "I love my studio and it's still there and I'm still doing work there. But separating myself from making other people's records for a while has allowed me to retain the attitude I feel most comfortable with, shameless creation with no real intention besides what feels right in the moment."