"Woman-Ochre" won't be coming back to Tucson any time soon. 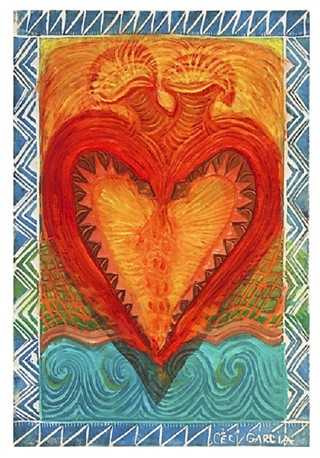 "Woman-Ochre" won't be coming back to Tucson any time soon.

The famed painting by Willem de Kooning was returned to the University of Arizona Museum of Art in the summer of 2017. Thirty-two years after it was stolen, it was discovered—damaged—in the home of a deceased couple near Silver City.

The wild piece, blazing in ochre and black, had been undergoing restoration at the Getty Center in Los Angeles since last spring, and it was scheduled to make a triumphant return to UAMA this fall.

That's not going to happen now.

The Getty team had been making "incredible progress" on the redo, says UAMA interim director Jill McCleary. But the restoration work was shut down in March when the Getty, along with nearly every other art venue in the nation, shuttered its doors to escape a deadly coronavirus that now has killed more than 282,500 people worldwide and nearly 80,000 in the U.S.

"Woman-Ochre" will return one day, its colors glowing and the tears to its canvas sewn up. But that unfortunate delay, no matter how long, is just one small setback in an art world that's struggling.

Here in Southern Arizona, galleries and museums have been closed since March, when Tucson Mayor Regina Romero and then Gov. Doug Ducey ordered non-essential businesses to shut down. (Ducey gave retail businesses, including galleries, the greenlight to re-open May 8, but it's not at all certain that most arts venues will any time soon.)

Shows that had just been mounted were seen by very few people. Julie Sasse, chief curator at the Tucson Museum of Art, had worked for more than four years on the book Southwest Rising about influential gallerist Elaine Horwitch. She had just opened a companion exhibition of work by Horwitch's artists, when the museum was suddenly closed.

Curators everywhere, in museums large and small, "have lost shows of a lifetime," Sasse says.

Likewise, curator Rebecca Senf had recently opened her show on the early years of Ansel Adams at the Center for Creative Photography. Those early photos were the topic of her doctoral dissertation, and her new book, co-published by Yale and the CCP, inspired the exhibition. Then the Center closed.

Etherton Gallery's Go Figure, a show of five artists working in oil, collage and mixed media. No sooner was it up than the gallery closed down.

The good news is that all three of these galleries, are keeping the work up on the walls, hoping that the venues will re-open soon and the fans can see the now-hidden art. But some shows have vanished altogether. Davis Dominguez Gallery, which already planned to close permanently June 13, had a gorgeous show featuring three women artists—Bailey Doogan, Jan Olsson and Judith Stewart—that "barely anyone saw," says the gallery's Candice Davis. It's no longer up at the gallery.

In its place, fans can see an online version of another exhibition that was meant to be the longtime gallery's grand finale. Works by sculptor Joy Fox and abstract painter Josh Goldberg are on view. But instead of taking in the lush swathes of color on Goldberg's giant canvases in person and inspecting the texture of Fox's textured clay, viewers will peer at these delights through the small screens of their phones and computers.

Technology has come to the rescue, it seems, like it or not. Websites everywhere are chockablock with online exhibitions (most of the shows mentioned here are on the web), and TMA's Sasse and the CCP's Senf can both be found giving virtual tours of their star-crossed shows.

Education curators are busily creating art lessons and games for kids and adults.

At MOCA Tucson, the art classes are related to the work of the exhibition artists. Amir H. Salla's brilliantly colored canvases, still filling up the museum's Great Hall, inspired online sessions that teach "how to do a still life," MOCA's Morah Riedl says. At UAMA, an online project taught aspiring artists how to make a zine.

In a way, the pandemic may permanently change the way humans perceive art.

As McCleary puts it, "We're transforming the things we do into a digital world."

But even a brave new virtual

art world needs money to survive. As we all know by now, the pandemic has done more than kill; it's crashing the economy and leaving millions of workers unemployed. The arts are in trouble.

"The Tucson cultural leaders have been talking," says Jeremy Mikolajczak, CEO of TMA, "and we're all getting hit hard."

A recent survey shows just how hard. In a blind questionnaire, the Southern Arizona Cultural Leadership Consortium (SACLC) asked its 31 member institutions—ranging from the Rialto Theatre to Tohono Chul Park to the Arizona-Sonora Desert Museum—to calculate the fallout of the virus and the closures. The 21 that responded reported catastrophic financial losses: added together, the 21 institutions estimate losses of some $15.3 million from March through June.

And they're short another $2.2 million that they had expected to earn, from planned events that didn't happen, admission tickets that were not purchased and the like.

Their staffs are decimated. The 21 organizations had 574 employees before the pandemic blew in. About half the workers—289—were laid off or furloughed. Most of the 214 staffers who still have jobs are getting reduced pay.

The survey also addressed the plight of artists. Painters and musicians and chefs, who would have been hired by the organizations for short-term gigs, together are looking at $2.1 million that they will never see.

"The creative work force is the hardest hit," Mikolajczak laments.

The Tucson art scene will endure "a slower recovery than elsewhere," he predicts. The Old Pueblo doesn't have the financial support that wealthier cities like Phoenix do, he notes. Our rival to the north has "foundations with more resources and more municipal and corporate donors."

On the plus side, Rio Nuevo, the downtown development group, has "pulled aside $2.5 million to distribute to businesses in the Rio Nuevo district," says Terry Etherton, who's exhibited photography and contemporary paintings in his gallery downtown for 39 years. The group awarded him with a $10,000 grant for business expenses.

The local Arts Foundation early on doled out artist grants that were quickly snapped up, and the Arizona Commission on the Arts is inviting cultural organizations to apply for AZ Care grants before June 2.

And the federal Paycheck Protection Program has poured some welcome money into Tucson's art community.

Etherton had to lay off three full-time employees when he had to close the gallery in March, but he applied for PPP and got $55,000.

"I was able to bring everyone back here full time," he says jubilantly.

The money is technically a loan, but if the business meets certain criteria, including devoting 75 percent of the cash to payroll, the loan is forgiven. The money runs out in July. "We're OK for two months," Etherton says.

TMA also won PPP money. The sprawling museum normally has 40 to 45 workers, and 32 were laid off in March. The PPP cash was enough to bring nine staffers back to work, including four curators. (Mikolajczak declined to give the amount of the loan.) The museum is now back up to about 14 workers. Their laid-off colleagues are getting unemployment checks from the state (up to $240 a week) and the feds ($600 a week), and museum board members and other donors picked up the bill for their health insurance through the end of July.

If all goes well, Mikolajczak says, "Absolutely I will hire them back."

The UA museum workers have not lost their jobs, but they're subject to the pay cuts of the furlough program.

Some galleries are trying to raise their own money. MOCA had to take its annual art auction online through May 22; fans are busily vying for art works.

Raices Taller, a 24-year-old co-op that specializes in Latinx work, needs money for rent and utilities.

A fundraising campaign is underway, and "it's gone really well," co-director John Salgado says, with much of the money coming from artists. Raices also is planning an auction of small prints by local artists, all of them images of the corazón—the heart.

Some arts venues are

tentatively beginning to think about when they can reopen. Legally, now they can.

Gov. Doug Ducey allowed retail businesses—which include galleries—to open up fully on May 8, provided managers followed protocols for social distancing. Ducey had pledged he would take that measure only once the threat of COVID-19 in the state was trending downward.

A pandemic task force of UA and ASU specialists advising the state had warned that it would be dangerous for businesses to open before the end of the month, but Ducey didn't take their advice. Arizona has seen 11,380 confirmed cases of COVID-19 as of Monday, May 11—and the largest single-day of new reported cases, 456, was just one week earlier, on Monday, May 4. A total of 542 people in Arizona have died after contracting the disease, including 134 in Pima County.

At least one small gallery in Tucson, Madaras, opened on Friday, May 8. As of last week, Etherton was planning to wait until May 15.

"No big parties," he says wryly; patrons, as everywhere, will be required to stand six feet apart in the spacious gallery and take advantage of the hand sanitizer on offer.

But others don't foresee opening their doors for quite a while. MOCA likely will stay closed all summer. Likewise, the university venues—UAMA, CCP, the Joseph Gross Gallery, the Arizona State Museum—don't expect to open until the locked-down university comes back to life. President Robert Robbins is hoping to start live classes on Aug. 24.

Other galleries are thinking about splitting the difference and opening in mid-summer.

By that time, the new Kasser Family Wing housing Latin American art will be finished (construction has proceeded during the closure). Sasse's Southwest Rising will be up and on view through Sept. 20. But there will be no parties to celebrate these milestones.

The post-lockdown museum will have plexiglass screens, masks and "not too many people," he says. Patrons will buy timed tickets in advance, to keep the numbers down. And the museum at first will have fewer hours, operating only Thursday through Sunday.

July is also the goal for the little galleries in the Warehouse Art District around Sixth Street and Sixth Avenue. Contreras Galley is hoping to reopen with Cats and Dog: An Abstract Perspective, a show originally scheduled for the spring. The popular annual Tucson show will follow in August.

"We're looking at early July," says Raices's Salgado. "Our first exhibition will be Estamos Unidos (We're Together). It will be people's reflections on COVID. I've never seen so much creativity."

But gone are the days of the district's First Saturday artists receptions, where galleries had receptions on the same nights and patrons came in hordes. Contreras has a stark message on its website:

"There will be no First Saturday artists receptions until there is a vaccine in use for the coronavirus."