At 5:43 p.m. on Monday, Dec. 9, UA Professor of Planetary Science Dante Lauretta unveiled the countdown clock for the OSIRIS-Rex mission.

At that point, exactly 999 days remained until the launch window opened for the UA's latest foray into the final frontier: A robotic space probe designed to swing up next to an asteroid, take photos and gather data, and then swoop in close enough to gather a sample from the space rock that will be sent back to Earth in a special capsule.

"This is a constant reminder now to everybody in this building and everybody on the team: Every day when you come into work, you'll see that the clock is ticking, time is going by and the launch window is inescapable," said Lauretta, who is serving as principal investigator on the OSIRIS-REx mission. "The asteroid is not going to wait for us. We have to get off the surface of the Earth starting in September of 2016."

While that may seem like a long way off, there's much work that needs to be done in order to get OSIRIS-REx off the ground. Before the launch, the team will have to build and test a collection of cameras and other instruments that will work in concert with each other to ensure that the $800 million mission is a success.

The first step happens between now and April of next year as the team puts the components through what's called a "shake and bake" test.

OSIRIS-REx—or Origins • Spectral Interpretation • Resource Identification • Security • Regolith Explorer—is part of NASA's New Frontiers Program. After its September 2016 launch, the spacecraft will spend roughly two years traveling through space before it reaches orbit with asteroid Bennu in 2018. It will spend about 500 days orbiting the asteroid to map and study it before swinging in close enough for a robotic arm to blast it with gas and collect a canister of mineral samples that will jet back to Earth and land in the Utah desert in 2023.

Those samples will give scientists a chance to learn more about the minerals and organic materials that make up an asteroid.

"One of the key science objectives of OSIRIS-REx is to go to a carbon-rich asteroid," Lauretta said. "We think asteroids may have contributed water that led to the Earth's oceans and organic material that led to the origin of life."

While the UA has landed the prestigious job of principal investigator on the mission, it will be working with NASA Goddard Space Flight Center, ASU and Lockheed Martin Space Systems, along with other partners.

The three cameras aboard OSIRIS-REx are "the latest in a long line of planetary science instruments that have come out of the Lunar and Planetary Laboratory," Lauretta said. "The team that is building these cameras built the cameras for the Phoenix Mars Lander, they were involved in the imager for Mars Pathfinder, and the descent imager spectral radiometer that was on the Huygens probe that landed on Saturn's moon Titan. ... This is really the latest in the University of Arizona's line of planetary cameras for NASA's space exploration missions."

Monday's press event also served as a chance to introduce reporters to a new OSIRIS-REx outreach effort. OSIRIS-REx will now directly talk to the public via a Twitter feed—@OSIRIS-REx—and team members will be doing regular updates via Facebook and YouTube. In addition, Lauretta will be writing a "Life on the Asteroid Frontier" blog and reaching out in other ways, such as the Reddit "Ask Me Anything" session he did following Monday's press conference.

The mission will be run out of the same building the UA purchased when it won the contract to manage the Phoenix Mars Lander mission, which dropped a robotic lab on the arctic plains of Mars in 2008.

The building, at Sixth Avenue and Drachman Street, was named after Michael J. Drake following the death of the longtime Lunar and Planetary Lab professor in 2011.

Drake played a key role in landing the OSIRIS-REx mission and when Lauretta spoke on Monday, he noted that a portrait of Drake hung in the lobby.

"He's here every day to remind us that he established this fantastic team culture—the fact that we're one team, OSIRIS-REx," Lauretta said. "We're not Arizona, Goddard, Lockheed Martin, ASU and all the other partners on this mission. We really are united in this fantastic effort to explore space and bring back this scientific treasure." 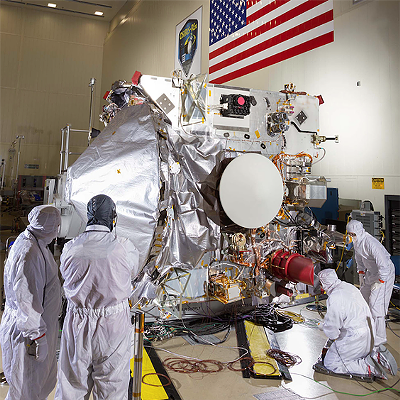