Rosati's might be a chain, but it is locally owned with house-made goodness 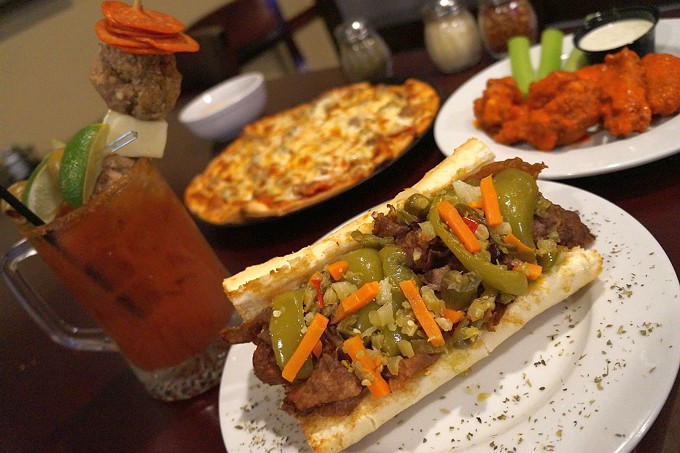 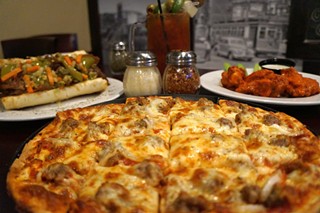 Rosati's has staked a claim in Oro Valley.

The first Rosati’s Pizza to open up in Tucson was on West Ina Road back in 2008. The next one popped up on Sixth Street, near the university, but thanks to a lease issue, that one had to call it quits too. Now the newest installment is in Oro Valley, and fingers crossed this one sticks around for a while.

We have a feeling it will.

Behind the Tucson Rosati's madness is a pizza power couple, Patrick and Jeanette Bush, who were the previous owners of the first two concepts. Know this: Rosati's might be a chain of 200 stores, but each one is locally owned and operated. Because of the big business money they have backing them, franchisers are able to deliver a quality product at a reasonable rate.

What impressed me the most was how many cooks back in the kitchen were making menu items from scratch. You'd think a place like Rosati's would just ship in frozen toppings and canned sauce. Nope. Freshly-ground pork was being churned in a large mixing bowl while spices and seasonings were carefully being added. Chunky tomatoes were getting mashed down and thrown into a pot, slowly simmering to get a good marinara thickness. Big blocks of mozzarella got pushed through a grater and the cheese was then delivered straight to the line, where it was expertly placed on hand-tossed dough. To say the least, I was pleased to see some actual food prep action here.

The move to Oro Valley was a smart one, seeing as the food vista of Tucson is now straight up brimming with absolutely brilliant (and some not so much) pizza parlors and slice dives. To focus on the Chicago element of Rosati's, it's good to get out of the hubbub for a spell and relax in a quiet shopping area to get the gist of why this restaurant format has survived for so long.

Chicago is famous for its deep dish pizza, among other things. It's come under much speculation from pizza purists whether the deep dish option is even "pizza" at all. Some say it falls more under the lasagna or even—yes, this is true—cake category. At Rosati's you can get some deep dish or you can opt for what they consider real Chicago-style pizza.

Authentic Chicago pizza, according to Patrick and Jeanette (among a throng of other experts), is a crunchy thin crust that is cut into squares, although most consider the deep-dish style pure Chicago. Now, we are not going to start a feud over this because in my humble food opinion I enjoy both sides of the pie. Luckily, Rosati's does either option well, and for less than $20, the deep-dish choice can easily fill up a family of four. It is cheesy, saucy and oh so gratifying. But for those that aren't fans of some apparent "pizza cake," the thinner approach is buttery and crispy. Rosati's also does something called "double dough," which is thicker, obviously, for those that can't decide which Chicago-inspired crust is the actual mob boss.

Beyond pizzas, Rosati's also offers up sandwiches that would satisfy any belly with any city-style dough preferences. Although a little intimidating when it arrived, the Italian Sausage ($8.95) with sweet peppers and a spicy giardiniera (a fiery Italian blend of pickled vegetables) was really tasty. Again, it's that house-made sausage I mentioned earlier but in bulk format and placed inside warm chewy bread. And you can't be a Chicago-based restaurant without featuring a true Chicago Hot Dog ($6.95). Just like the sandwich, it was gloriously grandiose with sport peppers, celery salt on a poppy seed bun. And the relish was electric green.

Not in the mood for meat? Rosati's has a caboodle of generous fresh salads. I personally enjoyed their Caesar salad ($8.95), which was mercifully not overdressed. There is also pasta, such as the fun and gooey three-cheese baked penne ($11.95), which will easily appease those that need a break from the beef.

But here is why I think this installment of Rosati's will survive: They have a full bar! The house specialty is a bloody Mary, which is tangy, pretty potent and garnished with pepperoni, pickles and a big meatball. That drink alone is a meal unto itself.

And that, as they say, is the Chicago way of doing things.