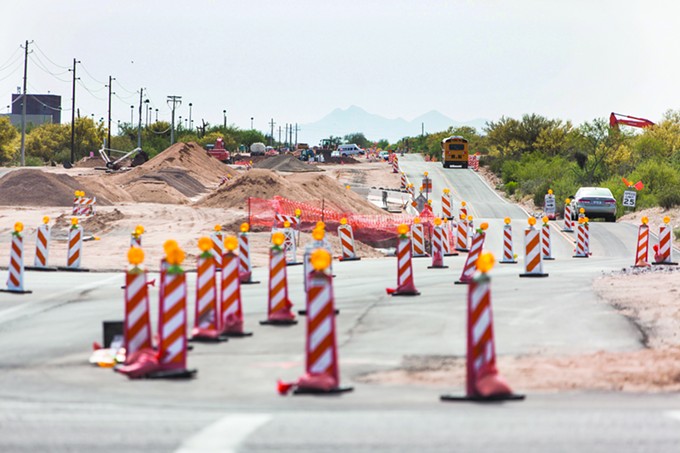 That's the big question facing voters this November as they decide the fate of a seven-question bond package on the November ballot. The bonds would be repaid by property taxes.

With this issue, the Weekly begins a series of articles focused on the different propositions, as well as the politics surrounding the election. We're kicking it off with a look at Prop 425, which will provide $200 million in road improvements, including $160 toward road repair and pavement preservation, $30 million for the start of the $90 million "Sonoran Corridor" project designed to link I-10 to I-19 between Sahuarita and the UA Tech Park, and $10 million on a project near the UA Tech Park.

The bond package was assembled by the county's 25-member Bond Advisory Committee, which spent years reviewing proposals, examining costs and eventually narrowing down a list of feasible projects.

Tucson Metro Chamber board chairman Tom McGovern says that "one of the reasons that we're so keen on these bonds is the opportunity to create new employment to help drive our economic growth." Lisa Lovalo, who chairs the Southern Arizona Leadership Council's Board of Directors, points out that voters haven't been asked to approve a bond package in 12 years "and a lot of has changed since then, and a lot of things need a cash infusion as the economy begins to come back." And Carolyn Campbell, who heads up the Coalition for Sonoran Desert Protection, says all seven bonds are vital to the future.

"Neighborhoods deserve reinvestment," Campbell says. "Affordable housing is a necessity. Job training and job creation are invaluable. And investment in community centers and parks is a basic piece of our community fabric."

The propositions' critics say whatever the value of the various projects, the county should not take on debt in order to get them done.

"I don't think we should be taking on all of that debt and new operating costs that go along with it with an economy that isn't growing," says Joe Boogaart, a spokesman for Taxpayers Against Pima Bonds. "It seems to me we just keep doing the same old thing and expecting different results."