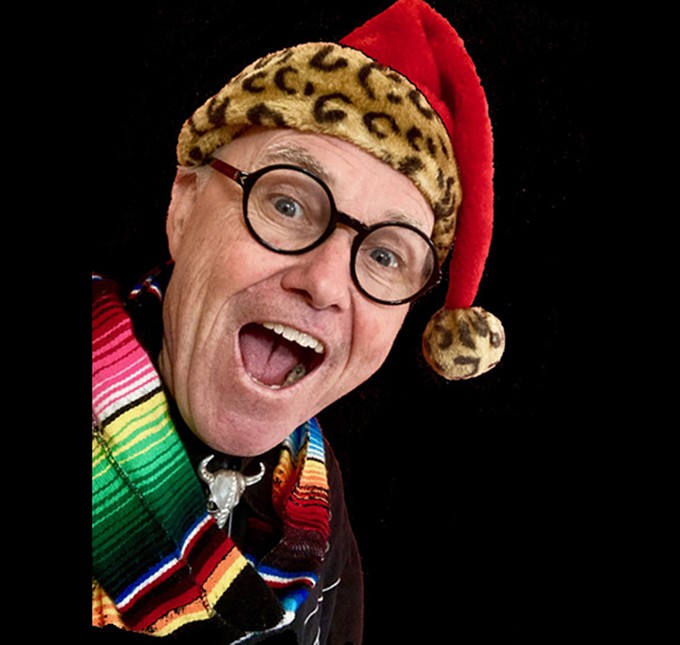 David Fitzsimmons says, “The Old Pueblo Holiday Radio Show” at the Rialto Theatre is going to be the Arroyo Café’s best show.

“We finally feel like an ensemble,” said the editorial cartoonist, comedian, writer and all-around funnyman.

The insanely talented posse of comedians and musicians hit the stage at 1 p.m. Sunday, Dec. 18.

The show’s format was inspired by Fitzsimmons’ fondness for the “Prairie Home Companion,” whose own producers acknowledged a debt to Nashville’s long-running Grand Ole Opry.

“I have always been a fan of ‘Prairie Home Companion,’ and I wanted to do something with that tone, but with a Tucson flavor, because Tucson is such a distinct, wonderful, unique, diverse place,” he said. “Flavorful. So I enjoy a sort of a ‘Powdermilk Biscuit Hour’ with a dollop of salsa and some perhaps livelier music.”

He’s also a fan of “groaners,” he said, and is happy to confess he likes some Borscht (Belt) with his tamales.

A Christmas Eve gathering of patrons at the Arroyo Café provides the backdrop for ongoing gags around the show’s regular characters — a couple of snowbirds, a weatherman, a “trailer park queen,” a loveable hostess and a grumpy conservative. There’s also a newscaster who serves as a narrator, integrating the show’s many parts.

“They discuss the news and issues of the day,” Fitzsimmons said. “Occasionally our narrator takes us out of that setting and we’ll just do a news broadcast or a sketch or parody or other ‘variety show’ entertainment.”

Wilbur Wildcat always makes an appearance and The Grandsons of the Pioneers, a subset of the Reveille Men’s chorus, provides an interlude of songs including holiday favorites. Attorney and comedian Elliott Glicksman and Gaslight Theater alum Bob Seivert, who performed professionally for years as the stand-up duo Bob and Bob, reunite in an act saluting Bob and Ray and the great comedians of vaudeville.

Of Seivert, Fitzsimmons said, “He’s funnier than any of us.”

Glicksman and Seivert are among the klatch of funny, talented, experienced and beloved Tucson entertainers who gather to write, rehearse and finally perform as cast members in The Arroyo Café. The cast also includes the impossibly charming KXCI host Bridgitte Thum, comedian and comedy writer Mike Sterner, and longtime stand-up comic and mariachi teacher David Membrila. Legendary broadcaster Marty Bishop is the show’s narrator and what Fitzsimmons calls “the velvet voice of the Arroyo Café.”

New to the group, and according to Fitzsimmons among the show’s greatest assets, are Gaslight Theater pianist, writer and parodist Rob Resetar and cool jazz vocalist and avowed “ham” Sheryl Ann McKinley. Fitzsimmons said, “Sheryl Ann will perform a gorgeous duet with Rob, ‘Baby it’s Warm Outside,’ and ‘Twisted,’ an Old Pueblo holiday parody she wrote just for our show.”

Of Resetar, Fitzsimmons said, “It’s so fun to do comedy with this wonderful music underneath the dialogue. And he’s funny. He’s written some wonderful song parodies, and he’s also going to perform a couple of holiday classics.” Resetar also plays in the Arroyo Café’s house band, the Cadillacs.

Sketches lined up for this year’s show include an improbably funny and still poignant interview of Glicksman in the role of the last drop of water in Lake Mead. More lighthearted are two sketches based on two terrible events that befell Fitzsimmons earlier in the year. Within just a few months of each other he had a heart attack that required a stent, then a bicycle accident that required a trip to the emergency room.

“Two of my favorite bits in the show are self-involved,” Fitzsimmons said. “One is about my cardiac event. I go to see Dr. Arthur’s Sclerosis (played by co-writer Glicksman), and it’s a great Borscht Belt bit … like the Sunshine Boys. It will leave you laughing so hard you’ll clutch your chest like I did back in May.

“The second bit is a commercial for ‘Dave Fit Simmons’’ super safe inflatable bicycle helmets, which makes fun of my bicycle accident.”

Adam Carolla at The Rialto

Comedian and radio personality Adam Carolla is best known for his long-running podcast “The Adam Carolla Show.” In 2011, it set a Guinness World Record as the Most Downloaded Podcast. There were far fewer podcasts in 2011, but we’re guessing his would now be longest running. His podcast topics range widely, but he’s frequently guested on political talk shows and for a time hosted a weekly segment, “Rollin’ with Carolla” on “The O’Reilly Factor.”
8 p.m. Thursday, Dec. 15, Rialto Theatre, 318 E. Congress Street, rialtotheatre.com, $29 to $48