More Songs About Heartbreak and Healing

By Rodd McLeod and Jim Nintzel 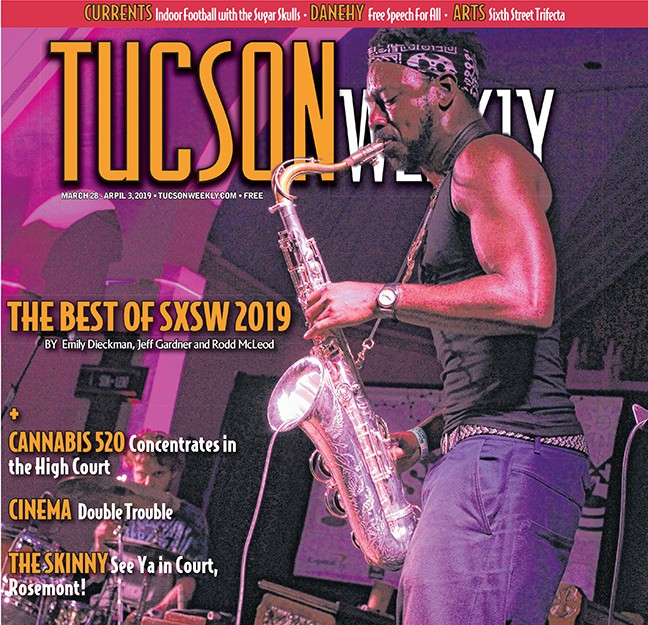 By the time I got to Austin midway through this year's South By Southwest, the stink of politicians had mostly faded, though the appearance of so many Democrats—including the GOP's favorite boogey-woman, Alexandra Ocasio-Cortez—had Fox News propagandist Sean Hannity calling South by Southwest a "socialist" festival—which is a laugh-out-loud line to anyone who's experienced the celebration of brands that is SXSW. Sure, it's not that hard to find free drinks, so maybe it's a little socialist, but still, comedian Brandon Wardell got closer to the truth during a set of Loud Village Live when he said SXSW was "like capitalism nutting on its own chest."

Yes, there's comedy at SX, and lots of movies, and lots of seminars on the weed biz, and the steady, Borg-like assimilation of the festival by digital tech and virtual reality. (Wardell also joked that he saw there was a panel discussion on "how we can turn poor people into computers.") But until we can strap on our VR googles and experience it all in the comfort of our living rooms, SXSW remains the best place in America to see up-and-coming bands, as Emily Dieckman and Rodd McLeod reveal in this week's recap of SXSW.

The planet is heating up, our social fabric is breaking down, and in Austin, Texas, each spring, singers gather from across the world to tell us what it all means.

And not just singers. There are rappers, guitar slingers, DJs, drummers, saxophonists and even a violin-playing Cajun who looks oddly like Malcolm Gladwell. (More on him later.) They perform in what seems like every nook and cranny of downtown Austin: clubs and barrooms, barbecue joints and churches, the riverfront lawn and backyard beer gardens. Two days into the SXSW music festival, it feels normal to see guys winding their way through the crowded streets rolling a guitar amp on a small dolly while gripping a cymbal stand under an arm, and everyone you meet seems to have a song to sing.

One young singer-songwriter joked, "If you know the words to this next one, please don't sing along. Go write your own damn song."

That singer, Bobby Choi of Seoul, Korea, goes by the name Big Phony, and in Central Presbyterian Church he delivered deadpan jokes and winsome love songs in a gentle hush. His 2016 album ("Big Phony") is full of pianos, drums and double-tracked vocals, but tonight in church it was just acoustic guitar and voice. His deft finger picking on "Everything-Always" swung beautifully, a folksy waltz about romantic uncertainty. Mild shock rippled through the pews when he sang, "I'm so damn nervous / Look, see I fuck it up," but he sang it with such modesty that you could almost forget that you were hearing the F-word in church, delivered from the altar, no less.

Two nights before, a jazz trio from London called The Comet is Coming played a different church (St. Dave's Episcopal), filling it to its rafters with loud, churning space funk. The synth player (Danalogue) and drummer (Betamax) laid down a series of dark grooves over which the tenor saxophonist (King Shabaka) reeled off one riff after another, twisting his melodies this way and that, like Sonny Rollins playing a rave. The music stomped around the church in glory, and synthman Danalogue thanked the audience for our attention to what he called "our latest DNA-restructuring mind vortex."

From acoustic ballads to space funk, from rap anthems to afro-Caribbean orchestral suites, I heard artist after artist describe the things that broke their hearts and found solace in the noise and the groove.

Elisapie Isaac, a singer and film maker from northern Quebec, told the story of a native young woman forced to give up a child. "She was a beautiful young woman and she got pregnant with her fourth child. But they forced her to give her up. Because she was young." That woman was Isaac's mother, and Isaac herself the child. The spare melody she sang was haunting and slow, sung over a rolling tom-tom groove.

Isaac's songs, sung in the native language Inuktitut, as well as English and French, are filled with longing. There's lots of slow playing, reflecting the wide open spaces of the tundra she grew up on.

The four-piece Boy Scouts from Oakland, California occupied an upscale cocktail bar, rolling out dreamy indie pop to a small crowd. Led by singer-guitarist Taylor Vick, the band evokes the misunderstood moments of young adulthood with wistful melodies and reverb-soaked guitar lines. With her $300 Danelectro guitar slung over her blue and orange winter jacket, Taylor Vick looks like Peter Pan and Tinkerbell all wrapped into one person, and she sounds like Paul McCartney got lost in a Bon Iver record.

Her band's forward momentum comes more from cymbal work than boom-bap, and every note of Vick's guitar jangle and falsetto singing is perfectly placed. On "Did You See Me Cry," she sang, "The winter that I learned to fly / you pretend you didn't see me cry / Neither did I."

The New Orleans band Sweet Crude rocked St. Dave's church with a wild-eyed set steeped in an innocent joy in making music. In true Millennial fashion, everyone in the band wears glasses. Frontman Sam Craft plays violin and sings, his curly mop bouncing along to the legba beat pounded out by the other five band members, who also uncork big four-part harmonies. (Craft is the Malcolm Gladwell lookalike.) Frontwoman Alexis Marceaux has an enormous voice (think Florence and the Machine), and these two singers unfurl their big happy melodies in English and Louisiana French, which they take pride in keeping alive by singing it in pop songs. The band's sense of irony-free fun is front and center: They've sewed lightning bolts to their clothing and Alexis has "Je te vols" ("I steal you") written on her cape.

On Saturday afternoon, the country soul singer Yola (from Bristol, UK) sang about the moment she realized what was important in her life as she watched her house burn down ("Walk Through Fire"). Her big voice recalls Tammy Wynette as much as Mavis Staples, and when she spins a melody as irresistible as the one that kicks off "Shady Grove" you can't help but be swept away. 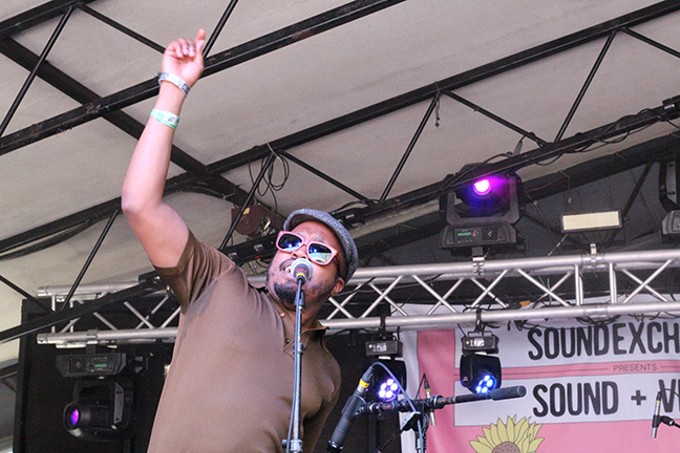 Yola performed in the afternoon sun in the yard outside the historic "Scoot Inn," and was followed by another soul artist, Durand Jones and the Indications. These guys and gals have learned their craft up, down, backwards, and sideways, cranking out slinky funk grooves punctuated by precise horn lines. Jones is an old school soul man who can work a groove as well as he works a melody, and raise his audience's consciousness to boot, contrasting congressmen in their briefing rooms with potluck meals at inner city schools ("Morning in America"). Drummer Aaron Frazier adds his falsetto to the stew on the ballads ("Is It Any Wonder"), playing Smokey Robinson to Durand's Marvin Gaye.

Canadian rockers Broken Social Scene stepped up next and blew the crowd away, tightly locked in rhythm as horns and guitars threw musical phrases back and forth in a giant wash of roaring sound. There were nine musicians on stage and though they were in the Texas sun, they sure dressed Canadian, in winter hats and jackets. You rarely see a band with four electric guitars chiming away on stage, but the grooves and riffs on "Super Connected," "1972" and "7/4 (Shoreline)" were undeniable. Singer Ariel Engle shared vocal duties with Kevin Drew (guitar, bass), leading the band shaman-like through peaks and valleys of the music. As the band finished its set, Drew offered his American audience a friendly Canadian perspective, saying, "All you can do now is get home safe, help each other out, and take care of each other." 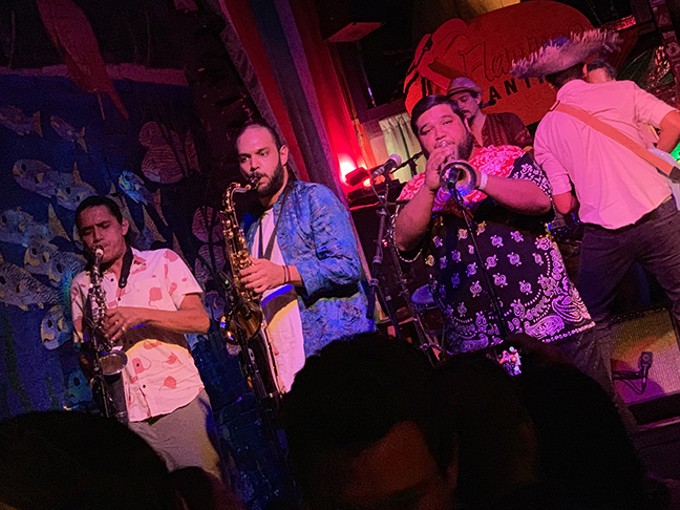 Another performance that moved the crowd came from the Costa Rican band Sonámbulo Psicotropical ("Psychotropical Sleepwalkers"). With members from Cuba, El Salvador, Columbia and Costa Rica, it's no wonder the group's music weaves together many Latin American forms, but its Afro-Cuban grooves were the beating heart of the group to me. With a three-man horn section perched at the front of the stage and several percussionists behind them, you could hear the echoes of Machito and his Afro-Cuban orchestra from the 1940s. They had the sweaty crowd moving immediately, as singer-guitarist David Cuenca, his face obscured by his straw hat, ripped stinging guitar riffs, providing the psychedelia to the stew. The band has been releasing albums for over a decade and explores similar territory as Tucson faves Sergio Mendoza y La Orkestra. If SXSW is primarily about discovering new artists, there were a few big stars who performed, generally at the main stage, a wide outdoor field overlooking Lady Bird Lake. The final performance of the festival featured Austin singer-songwriter Patty Griffin, who wowed a crowd of thousands into stunned silence with her opening lament, "Mama's Worried."

People in their stylish clothes They look at us and turn up their nose A hunger deep inside me grows And then it goes away ...

This flamenco-flavored song highlighted Griffin's uncanny ability to evoke shame and longing. Following that with a set of songs that somehow made people feel welcome and together was close to miraculous. She finished up with Stevie Wonder's "Higher Ground," a song about the persistence to overcome.

The night before Griffin performed, festival goers were treated to a performance by Atlanta's Dungeon Family, featuring Big Boi (one-half of OutKast), Sleepy Brown, Goodie Mob and Cee Lo Green. As Big Boi happily explained from inside his hoodie and bubble vest, "This is the kick-off to our tour. It ain't nothin' but hit after hit after motherfuckin' hit."

We shouted out the complicated horn lines–and with no horns on stage, that meant a hoarse call-and-response chant with Sleepy Brown–to "SpottieOttieDopaliscious."

We watched in mild awe as the sign language interpreters live translated verse after verse.

We sang along to "Dirty South," "Sky High," "The Way You Move," and, speaking about heartbreak, "Miss Jackson."

Just like the man said, that is a ton of hits for one performance, even for our biggest-ever rap supergroup, but interestingly it was a Dungeon Family R&B song rather than a rap track that best captured the spirit of the festival. Friday, March 15, was the day of the mass shooting in New Zealand, and festival goers woke to the ugly news. It's tough to know how big and terrible events affect artists or their audiences in the moment. But that day, questions about violence and hatred and identity rattled around inside of us. That night, Cee Lo Green stood at the lip of the stage, arms up, and belted out his Grammy-winning megahit "Crazy."

I think you're crazy