With the hipness, Culinary Dropout ensnares midtown by way of color, space and pure grandiloquence 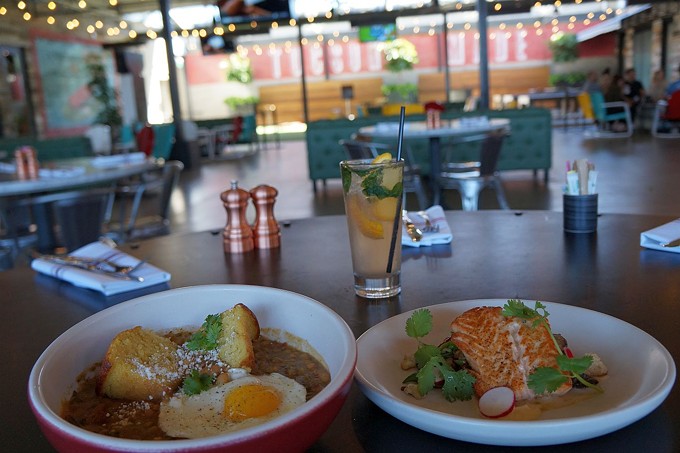 Mark Whittaker
Look at all this yum!

Mark Whittaker
Look at all this fun!

The young and attractive crew manning the host stand announce that there is a bit of a wait, so you are invited in to hang out until a table becomes available. The bar is packed, three people deep at least. In fact, the whole cocktail arena, which is quite spacious, the size of most neighborhood saloons, is teeming with heads circling around scanning the hip décor with images of Bowie and Prince swirling in bright pastel shades, while at the same time darting their gaze to see if they are possibly sitting next to some local celebrity.

You find a seat as neighboring tables discuss the "suggested" use of the valet service. When you pull in, young upstarts ask for your keys, but this is an option you, apparently, do not have to give into. Although it is unclear whether you do, or you don't, so some patrons growing impatient waiting for their table grumble because their car is in the hands of some kid expecting a tip.

As you continue your idle, sipping on craft cocktails with names such as Pistols at Dawn (made with Bulleit bourbon, get it?), Velvet Death (infused with Death's Door gin) or a cucumber-infused sake blitz titled the Drunken Panda (none of which price below $10), you stare into the ferocious maw of the kitchen as cooks preciously yet hurriedly plate Black Mussels ($13) seeping in a Stella Artois broth and dotted with sausage or what your friend Greg advised you to order, the Meatloaf ($15), because he says it's "exactly like his mom never made" and the green beans and mashed potatoes are "righteous."

Looking into the main dining hall, your eyes widen a bit. Wow, this place is big—like, hangar big. Outside of people sitting at colorful tables served by colorful people delivering colorful dishes, there is a play area where families battle at ping pong tables, shuffle board courts and the unfortunately named cornhole. Everyone seems to be having an enjoyable time. You're really looking forward to getting in there and being a part of it all.

On this particular night, a local band is playing, adding to the regalement. More people spill in. Servers, managers and bartenders try to keep up, winding around enthusiastic patrons and loose children as if navigating an obstacle course on the deck of a ship powering through a storm. Unlike most Fox restaurant concepts, this one is far from subdued. This is a nightly happening; a surge of faces from Oro Valley to Green Valley all gathering together to try to get in on the action.

Eventually your table becomes available, and you've already prepared yourself to order up but, darn it, a server—at least yours—is nowhere to be found, even though members of the staff glide through the throng looking as if they had just stepped out of a youth fashion catalog. One does approach, you place your order and then...

Being understanding because they are so busy, you get up and inspect a swanky backroom titled The Coop scribed in neon above the entrance. A handsome authority swoops up and asks if you are a part of a group. Confused, you answer honestly while noting that the oaken brasserie is all but empty. Well-lit bottles of top-shelf booze gleam back in brown-hued opulence waiting for that perfect pour you find yourself desiring.

It is here that you find out that Culinary Dropout likens itself to a "British gastropub." Inspecting around you, the impression you get is that of a controlled carnival staffed by retro apparel models and those donning ironic Dixieland moustaches. But your food has made it to the table, so you head back in anticipation.

The Pub Burger ($13), boasting Havarti cheese, bacon and a smoky house BBQ sauce, is quite juicy and full of flavor and you lucked out with the Butternut Squash Cannelloni ($15), most likely because of the nicely charred Brussels sprouts and sumptuous herb-butter sauce it all comes wading in. But the heavy salt element of the Turkey Pastrami ($13) and the unstimulating use of seasoning on the Roasted Salmon ($22) inspires some shrugs. But, hey, the place just opened so hopefully the Culinary Dropout crew will find their rhythm soon. And you know you'll be back. A midtown jumping joint such as this is bound to be a destination for gatherings and dates to come.

As you leave, and the smiling door squad bids you farewell, you feel a bit dizzy, as if your head was stuck in a pinball machine for a few hours. But you had a good time and honestly that's the whole idea.