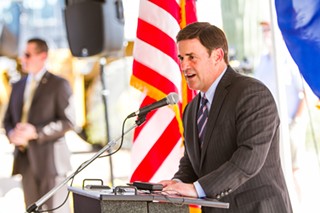 File photo
Who would have thought Gov. Doug Ducey would become an enemy of the American people?

The Arizona Republican Party has lost its marbles following President-Elect Joe Biden's win in the state.

Biden's win wasn't even that big of a surprise. Sure, Bill Clinton was the only Democrat to win Arizona since the days of Harry Truman, but Biden led narrowly in almost every poll leading up to Election Day. Donald Trump's loss here—and in other states—is just more evidence of what a truly repellent president he was to the majority of Americans who voted.

Arizona Republican Party chair Kelli Ward—who earned the appropriate nickname "Chemtrail Kelli" from the late Sen. John McCain when she challenged him back in 2016—has been leading the charge with her lunatic updates on the presidential race via social media. This week, she informed us that the Arizona GOP has selected its own team of 11 electors for Trump. Of course, since Trump lost the state, this was akin to creating an 11-person Dungeons and Dragons roleplaying squad and getting out the 12-sided dice. (We'd put Kelli in the "chaotic evil" category.)

Then there was the 10-hour "hearing" put on by a gang of GOP lawmakers, who hosted lawyer Rudy Guiliani in a hotel ballroom because legislative leaders were not buying into this bullshit. Guiliani and his various minions unleashed an overflowing stream of disinformation.

We'll admit we didn't watch all 10 hours of nonsense that unfurled there, but we did catch enough highlights to notice that Guiliani suggested Arizona—population 7 million, give or take—was home to 5 million undocumented immigrants. Wow, five out of seven Arizonans have illegally entered the country! We wouldn't have guessed the numbers were that high.

The circus ringmaster that day was state Rep. Mark Finchem, a Republican from Oro Valley who has been on quite a Twitter tear lately. As it worked out, that marathon meeting accomplished one thing: Following Rudy's COVID diagnosis, the Arizona Legislature closed for a week because so many unmasked lawmakers were breathing on each other throughout.

We're not saying that the meeting with Guiliani was a super-spreader event, but we haven't seen much of Finchem doing his Old West cosplay in public lately. The rumor mill at the Capitol is abuzz with the rumor that Finchem came down with COVID during his crusade to overturn the will of Arizona voters. (Finchem did not respond to a query from The Skinny as to whether he'd fallen victim to the virus.) But he has stayed busy on Twitter, calling the results of the election an attack by foreign powers and/or a coup by the oligarchy and/or an illegitimate win that state lawmakers can just overturn.

Oddly, all these claims are being made outside of courtrooms, because the legal efforts keep falling apart as there's no proof of these nutty claims.

Meanwhile, Republicans who do the bare minimum of defending the state's election system are facing all manner of blowback from their base. Activists are calling for the recall of Gov. Doug Ducey, who has become a traitor in their eyes. (And in the eyes of Trump, who asked via Twitter this week: "Who is a worse governor, @BrianKempGA of Georgia or @DougDucey of Arizona? These are two RINO Republicans who fought against me and the Republican Party harder than any Democrat. They allowed states that I won easily to be stolen. Never forget, vote them out of office!")

We wonder: Do the GOP state lawmakers involved in this lunacy expect to have their bills signed by Ducey next year? Of course, that assumes there will something resembling a normal legislative session, with lawmakers rubbing elbows—and who knows what else—with staff, lobbyists and the public. Given the state of COVID in the state as 2020 draws to the close, the Arizona Legislature appears to be transforming from the pleasure palace of special interests into an inescapable death trap.

But Ducey isn't the only Republican under fire from the pitchforks-and-torches crowd. Attorney General Mark Brnovich, who has ambitions to run for governor in two years, has been attacked for pointing out that there's no evidence of the massive fraud that the Kool-Aid gang is alleging. Speaker of the House Rusty Bowers—another conservative who still has a connection to the reality—had an angry mob surround his house.

We'll see where the next few months—and years—take the Arizona GOP. You can expect this nonsense to play out in the 2022 primaries for governor, U.S. Senate, Congress and the Legislature itself.

But don't count on Democrats to be able to capitalize on the disarray in the GOP. With Biden in the White House, Republicans are likely to gain ground in the 2022 midterms, no matter how crazy they get. And we have yet to see how the Independent Redistricting Commission will draw up the maps for Arizona's legislative and congressional districts, but we're guessing the members plan to do all they can to gerrymander the state to improve the GOP's margins at the Legislature and Congress.

The state is in for a rough decade if they succeed.

More »
More The Skinny »
All News & Opinion »
Comments (9)
Add a comment
Subscribe to this thread:
By Email