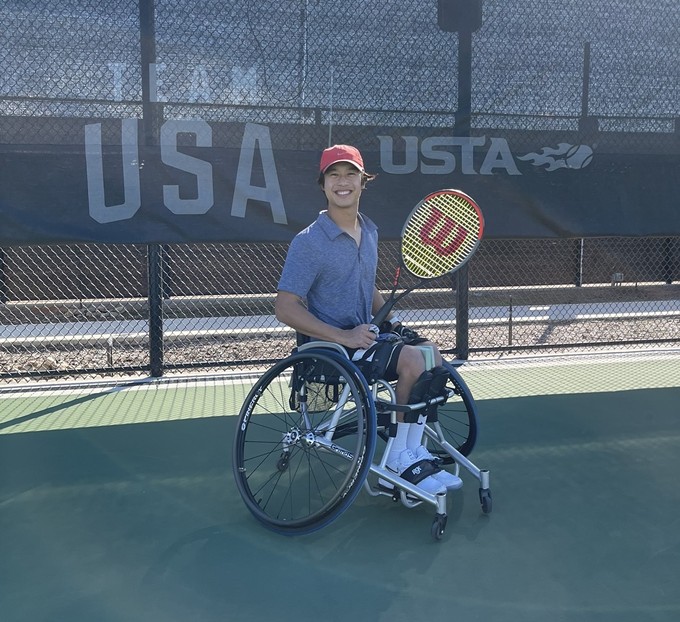 Seven years ago, Jason Keatseangsilp was a spectator in the stands at the U.S. Open. This year, he’s on-court in one of tennis’ most prestigious tournaments.

Tucson born and raised, Keatseangsilp, 28, is one of two players to receive wild card entry to the 2022 U.S. Open Wheelchair Championships. His success comes at a time of monumental growth for wheelchair tennis, as the tournament expanded its player field this year to the largest in Grand Slam history.

Keatseangsilp embarked for his Grand Slam debut on Sept. 4. Men’s and women’s wheelchair match play begins during the second week of the U.S. Open, with draws revealed Sept. 6.

“Tennis is an individual sport, but it’s a group effort. My family and my friends, all my networks — I couldn’t have done it without the combination of everyone,” he said. “So, I’m stoked for New York now and hopefully it’ll be a good time.”

The U.S. Open, held at the USTA Billie Jean King National Tennis Center in Flushing Meadows, New York, is the fourth and final Grand Slam tournament of the season. Playing in a major tournament is a tennis player’s dream, and Keatseangsilp’s perseverance has made it a reality.

As of late August, Keatseangsilp was ranked No. 36 by the International Tennis Federation (ITF) out of approximately 450 men’s wheelchair tennis players in the world. He reached a record-high ranking of No. 31 in June, and has maintained his position as the No. 2 American for nearly the entire 2022 year.

Preceding his wild card admission to the U.S. Open, he has played around 15 tournaments over the past year. He swept the Janco Steel Wheelchair Tennis Classic in Canada for his first international singles title a few months ago, adding to his trophy collection of 14 international doubles titles. His resume also includes playing for Team USA in three international flagship events.

“No one, including myself, would have guessed I was going to play a Grand Slam at any point,” he said. “One of my dreams was always Paralympics, but playing a major was kind of out of the question because I didn’t think I would be able to get to that level. I’m so grateful and blessed to have this opportunity.”

Keatseangsilp played wheelchair tennis a few times a year from 2012 to 2016, committing to full-time training mid-2017. He competed in his first wheelchair tournament in November of that year, and jumped into the international circuit the following summer in 2018.

He was actively involved in able-bodied tennis growing up, playing for Catalina Foothills High School until his senior year and planning to continue his tennis career at a Division 3 college. His aspirations were abruptly interrupted, however, by a rappelling accident that resulted in a spinal cord injury when he was 17.

After intensive rehabilitation, undergoing major surgeries and graduating from the University of Arizona in 2017 with a degree in biomedical engineering, he decided to pick up his racquet again and give wheelchair tennis a shot.

The only difference in rules between able-bodied tennis and wheelchair tennis is the second ball bounce allowed in the latter circuit. The physical and mental adjustment to wheelchair tennis was tough, but Keatseangsilp dedicated himself to the sport he loves.

“I’m so thankful. This is what I’ve been doing for the last five years. All the training, all the travels, all the efforts have been completely worth it to get to this point,” he said.

Keatseangsilp’s achievement aligns with wheelchair tennis’ most recent milestone of fielding its largest draw at a major tournament.

The U.S. Open expanded its men’s and women’s wheelchair singles draws from eight to 16 players and its doubles draws from four to eight teams. This year also sees the introduction of its Junior Wheelchair Championships, the first junior wheelchair event at any of the majors.

“I’m really glad the United States, our home Grand Slam, got to be one of the innovators in trying to push for more growth by adding the junior divisions, and then also increasing the men’s and the women’s draws,” Keatseangsilp said.

This expansion not only presents the opportunity for more players across the globe to compete on a major stage, it offers more ranking points and prize money. Keatseangsilp believes that these additions are a “huge incentive” for those with disabilities looking to play wheelchair sports.

“I think wheelchair tennis has been one of the most professional, if not the most professional wheelchair sport, because we’ve got a lot of integration with the Grand Slams, with the ITF, and then also a lot of the top international players have corporate sponsors, and we have an international tour,” he said. “With the U.S. Open draw size increasing, I think that’s going to pave the way and open up more opportunities for players to be competing at the highest level.”

Within the next five to 10 years, Keatseangsilp said that he can see the overall number of internationally ranked players increase, with more players seeking corporate sponsorships or pushing for their national government’s investment.

He also hopes that the other three Grand Slams, Wimbledon, Roland Garros and the Australian Open, will follow the U.S. Open’s suit and incorporate junior divisions.