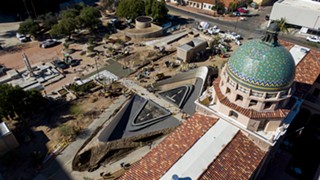 Jan. 8, 2021, is the 10th anniversary of the Tucson shooting, which killed six and wounded 13 people who were gathered for Congresswoman Gabrielle Giffords’ 21st Congress on Your Corner.

Jan. 8, 2011, was a beautiful, crisp Tucson morning. The attendees were lined up waiting to have a few private moments with their Representative

The Congress on Your Corner started promptly at 10 a.m. At 10:10 am the shooting started. In 19.6 seconds, the shooter discharged 33 bullets from his handgun. I saw Gabby shot in the head and go down. That memory is embedded in my mind. After Gabby, I was shot twice. I also will never forget seeing my deputy, Gabe Zimmerman, fall at my feet. As I looked at his face, I knew he was dead. On the other side of me, Judge John Roll was being given CPR by a nurse who was shopping that morning. He did not survive. Four others died that day: Christina-Taylor Green, Dorwan Stoddard, Dorothy Morris and Phyliss Schneck.

Our community was shocked and in disbelief when the news reports came in. How could something like this happen here? Within hours people stood up three spontaneous memorials, at the Safeway, at Gabby’s office and at UMC, where the most seriously wounded had been taken.

The memorials were a place to mourn those who were murdered and hope for the recovery of the wounded. What happened that morning did not define us. What happened in the following days, weeks and months defined us. The aftermath was marked by compassion, love, prayers and support from our community, which none of us will ever forget.

Two days after the shooting, Tucsonan Greg Hart reflected on what he saw at the UMC memorial. Here is what he said:

“I walked to the vigil last night in front of University Medical Center. It was cold. There was no stir in the air at all. The flags hung straight down, no motion, pulled taut by gravity.

There was a man who had taken it upon himself to tend the memorial of the community’s sorrow, arranging and rearranging the flowers, re-lighting the candles that had gone out, straightening the cards and signs. I envied him his task, his expression of caring.

And I thought that there have always been those who take solace in tending to memorials, adjusting this or that, saying, I suppose, what a mother says when she adjusts a stray lock of hair on her child’s face—I love you beyond all telling. I say, bless him, the memorial tender.

I thought, we are small, but we contain great things.

The lighted hospital rose up, monumental, behind the memorial. Inside, all of our worst fears, our sorrows, but also our hope, in many ways, the best of who we are. The hospital itself a manifestation of our determination and our aspirations, our collective longing to ease suffering, to be better, to be kind.

The crescent moon and one star hung directly overhead; the only things visible in the sky. They cannot explain, they cannot dispel our despair, but in their presence, they are our friends, nonetheless.

I noticed a very tall, gaunt man behind me. He had a beard down to his mid chest, a man who could get your attention. He was whispering what appeared to be an incantation and gently tossing pinches of dirt or seed in the four directions. Who is he? I thought. What is he doing?

Bless him, it is not for me to judge.

We are small, but we contain great things.”

As I walked away from the memorial toward home, I turned to look back one more time.

Beside me the reporters were getting ready for the 10 o’clock news beside the media trucks, last-minute changes and updates to their reports, last-minute adjustments to their hair and their scripts, getting ready to tell to the world. Tell the world what, I thought, that there is great confusion and sorrow in the world?

Yes, I think that’s about it. I looked back at the memorial, and I noticed for the first time in my life that candles try really hard. I could see that they were burning there in front of the hospital and beneath the moon with the fiercest intensity, and I realized that is what a candle does. There’s no halfway with a candle. Light it and it burns for everything its worth, on fire, casting all the light it possibly can until it goes out, and then I walked home with a new respect for candles.

Burn bright until you go out, I thought. Bless us all.

We are small, but we contain great things.

Greg’s piece reminded me why we build memorials. Now, we have a permanent memorial next to the historic Pima County Courthouse in El Presidio Park. The memorial is designed to look like an embrace. Those of us who were there on Jan. 8, 2011, have felt the embrace of our community ever since the tragedy. Inside the memorial, built with the generous contributions of many individuals, companies and foundations, there are symbols in the steel walls. Each symbol represents an aspect of the lives of victims and survivors.

On Jan. 8, 2021, starting at 9:55 a.m., a virtual ceremony will take place at the memorial. It can be viewed live on KVOA and on other stations. It will also be live streamed on the Pima County Government Facebook page.

On behalf of all of us who were deeply and personally affected by the shooting, I want to thank the people of Pima County for their loving support. Together we thrive!