I-10 improvements include dust detection technology 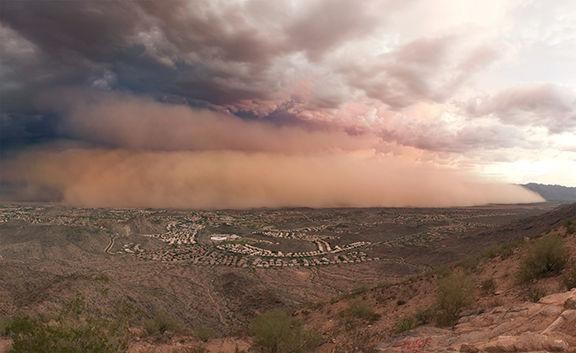 Alan Stark on Flickr
A dust storm over the Phoenix area.
Commuters on Interstate 10 can expect to see road signs more advanced than the standard "Blowing Dust Area" warnings thanks to a federal FASTLANE grant. As the Arizona Department of Transportation finishes up work on their I-10 Picacho Widening and Improvement Project, they are also introducing their Dust Detection and Warning System. Construction on both of these projects is expected to finish in October, but all lanes are projected to open within the next two weeks.

The Federal Highway Administration and ADOT are implementing the Dust Detection and Warning System from Sunshine Boulevard to Picacho Peak Road on I-10, between mile markers 209 and 219. The system is an array of long-range sensors that can recognize an approaching dust storm, and warn ADOT and drivers of the upcoming gusts.

"It's a 'pilot system' taking all the things we already use for safety and putting them together," said Steve Elliott, ADOT Assistant Communication Director for Public Information.

The $6.5 million dust-detection system includes cameras and sensors to "measure dust and visibility along the interstate and miles beyond into the desert west of I-10." The attached weather radar has a roughly 50 mile range. A closed-circuit camera network also allows ADOT to see how limited visibility is due to dust.

If the dust storms are severe enough to threaten driver safety, a series of electronic speed limit signs can gradually reduce speed from 75 to 25 mph. The speed signs are placed every 1000 feet in the first updated mile of the highway, then every two miles beyond that.

"This will help reduce the speed differential that can result in crashes in that area," Elliott said.

The system also includes "loop detection sensors" embedded in the road to inform ADOT when traffic speeds are reducing because of dust storms. A series of overhead electronic message boards can also provide drivers with safety tips and information about the path of the storm.

While ADOT has used this technology in different areas before, this is the first time all the different types of technology are being used on the same highway project. If the dust-detection system proves to be a success, Elliott said it could pave the way for similar systems on other Arizona highways, even on other sections of I-10.

The Picacho Widening and Improvement Project involves reconstructing the I-10/SR-87 traffic interchange and widening the I-10 from two lanes to three lanes in each direction. In addition, ADOT replaced the bridges for the SR-87 interchange underpass and over the Union Pacific Railroad. Part of this plan involves shifting the I-10 approximately 500 feet to the north, realigning it to travel beneath SR-87. Highway lighting will be improved to LED bulbs, as well.

In addition to the dust-detection system, ADOT is adapting I-10 to desert storms by upgrading and modifying the highway's drainage system.

The dust-detection system is being built at the same time the Arizona Department of Environmental Quality applied "soil stabilizer" to nearly 100 acres of open or undisturbed desert in Pinal County near I-10. The environmentally friendly product is intended to bind the loose soil and reduce the potential for blowing dust. ADEQ is part of an "I-10 Dust Workgroup," which takes measures to reduce the blowing dust storms along I-10 between Tucson and Phoenix.

This technology is the latest in a series of developments by national tranportation authorities to combat dust storms on highways, which are responsible for dozens of collisions, and even fatalities, every year.

"Of course, this is to provide additional information and safety. But none of this replaces common sense," Elliott said. "When you're driving and there's a dust storm, it's always safest to pull over. The saying is 'Pull aside, stay alive'." ■