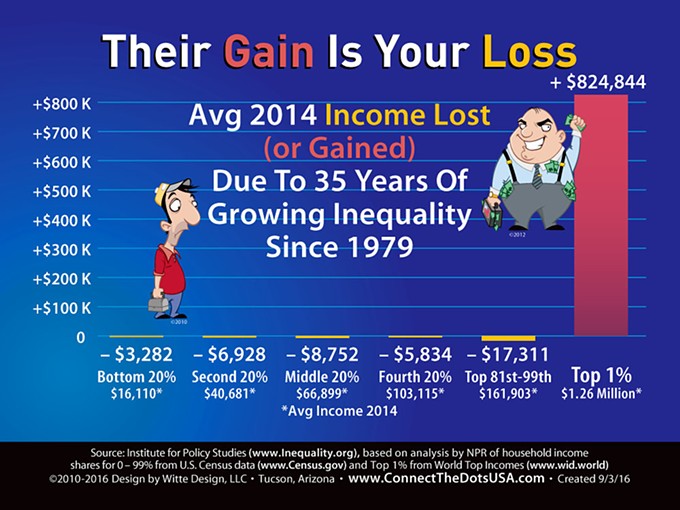 Exploding deficits, trickle-down tricks, evaporating entitlements, healthcare scarcity, unattainable higher education and a resulting recession are just a few of the terrifying topics at a panel on Trump's tax reform, hosted by Rep. Raúl Grijalva, at the Pueblo Community Center on Wednesday, Feb. 21.

Back in the day, the top income bracket was taxed at 70 percent, before tax cuts under Ronald Reagan in 1982. Even farther back, in 1956 when Eisenhower was president, a married couple's income that exceeded $3.6 million was taxed at a 91 percent rate. Unsurprisingly, income inequality was not a topic of public outcry.

In fact, the last time we had similar income inequality as today was right before the Great Recession, when top tax rates were at 25 percent, said panelist Andrea Witte, founder of Connect the Dots USA, an educational platform connecting reputable non-partisan studies on civics and policy to the broader effect they have on the majority of Americans.

"We're just repeating history here," she said about the new tax law. "Our measly tax cuts are just to carry the water and make the argument for the billionaire bonus cuts."

Below are a few of the most alarming measures, presented at the panel.

The wealthiest Americans get more cuts than middle-class families, which the GOP claim will boost the economy, or as supporter of the law Rep. Martha McSally says, "put our economy in afterburner."

The bottom 60 percent of earners will see around $400 cut from their taxes, a fact House Speaker Paul Ryan celebrated in a tweet: "A secretary at a public high school in Lancaster, PA, said she was pleasantly surprised her pay went up $1.50 a week ... she said [that] will more than cover her Costco membership for the year."

That tweet (and Ryan's obvious disconnect from the lives of regular people) received enough backlash that the lawmaker deleted it. A later, undeleted tweet apparently more accurately described the sentiment he was going for: "I have heard time and again that the middle class is getting crumbs, but I'll take it!"

In 2025, the cuts to individuals and families expire, eliminating Ryan's celebrated crumbs to the poor, while the corporate tax cuts are permanent. By 2027, 57 percent of households making less than $200,000 a year will see their taxes go up, and 83 percent of the tax cuts will go to the richest 1 percent of taxpayers, according to TPC. That will shift almost $1.4 trillion from public revenue to corporate wealth by 2027, according to the Joint Committee on Taxation.

"Don't expect greedy corporations to share their new-found riches with us, the workers," Witte said.

In a Morgan Stanley survey of over 550 major companies, only 13 percent plan to use savings from the tax cut to increase worker pay. They plan to use two-thirds for stock buybacks, dividends, mergers and acquisitions.

"Remember when fake-populist Trump insisted he would be a different kind of Republican and help out the forgotten worker?" Witte said. "Well, is anyone really surprised his tax plan is just a continuation of the long, 40-year con known as trickle-down economics AKA reverse Robin Hood?"

A spoonful of fiscal amnesia makes

"Under President Bush, we had a similar trickle-down tax incentive," Grijalva said. "Again, concentrated, not as extensively as this one, on the upper income and corporate America.... Economists across the country, from all sides, attribute that tax cut to being what helped usher in the Great Recession three or four years later. And to some extent, history has repeated itself."

The plan will increase the national debt by $1.5 trillion to $2.2 trillion, according to Center on Budget and Policy Priorities. The GOP-led Congress will need to find a way to balance the budget, and as Grijalva put it, they'll "discovered their fiscal conservative streak again."

So how will they deal with a ballooning deficit? Ryan's plan, as expressed in interviews, is to cut popular programs like Social Security, Medicaid and Medicare.

"We're going to have to get back next year to entitlement reform, which is how you tackle the debt and the deficit," Ryan said during an interview on Ross Kaminsky's talk radio show, adding that "health-care entitlements" are "where the problem lies, fiscally speaking."

How Trump plans to pay for the cuts, along with additional defense spending and a border wall, is reflected in his 2019 budget proposal, which would slash funding to the Environmental Protection Agency, scrap community-development block grants and heating assistance for low-income housing and gut the Corporation for Public Broadcasting and the national endowments for the Arts and the Humanities—to list a few gems.

These tax cuts have been allowed by a lack of civic engagement in 2016, said panelist David Lujan, director of The Arizona Center for Economic Progress and former state lawmaker.

"If you are frustrated, angry, scared about these tax cuts, then we all need to mobilize and make sure the budget cuts, which they are planning, do not occur and that we have people in Congress who are making decisions that are going to turn this around, so we're investing in all Arizonans and all Americans rather than the top 1 percent," he said

or he's just a liar

"This is going to cost me a fortune, this thing, believe me," Trump said about the new tax law, days before it passed. "This is not good for me.... I have some very wealthy friends—not so happy with me, but that's OK. You know, I keep hearing [Minority Leader Chuck] Schumer: 'This is for the wealthy.' Well, if it is, my friends don't know about it."

It's impossible to know exactly how much the president stands to gain from the cuts since he hasn't released his taxes, unlike every other president over the last 40 years. But he will definitely gain from cuts to the top individual income tax rate as well as a tax break for income from "pass-through business entities," of which Trump owns 500, according to his tax council with Morgan Lewis.

As well, Trump and his family will benefit from existing tax loopholes for real estate developers, maintained in the new law, and a new loophole it created, according to the Institute on Taxation and Economic Policy.

Trump's leaked 2005 tax return shows us he paid 24 percent of his taxable income that year in federal taxes. Without the Alternative Minimum Tax (the part of the corporate tax he just eliminated), he would have paid 4 percent, according to the New York Times.

Add those Trump tax cuts to doubling the estate tax exemption, and Americans for Tax Fairness estimates Trump stands to profit $11 million to $22 million a year. Trump was right about the costly part—but off about who it would cost.

Ombudsman for the Pima Council on Aging Stew Grabel, a jovial man from the Bronx wearing a Looney Toons tie, told the crowd at Grijalva's forum that he's old enough to remember when Trump was a Democrat in New York. And even back then, he said, everyone knew he was a liar.

"I have a long history telling that, but that doesn't do me any good," he said. "That doesn't help me convince somebody that they need to do something about what's going on. The numbers and the facts and the statistics don't matter. What we need to do is talk to people, about the things that do matter."